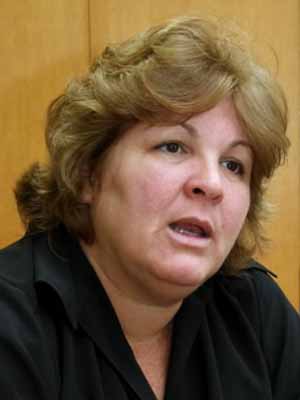 Just after visiting Hiroshima in 1959, Cuba’s revolutionary leader Che Guevara, sent a postcard to his family saying, “In order to better fight for peace, one must see Hiroshima.” There was ongoing tension between Cuba and the United States then. With his words in mind, Guevara’s daughter Aleida, 47, paid her first visit to Hiroshima and reflected on her father’s life.

Your father died when you were only 7 years old. Were you influenced by him?
As a father, I hardly remember him. I learned about him from my mother and others. Still, he is my role model in everything I do, more so as a citizen of Cuba than as his daughter. With courage he realized the dream of a revolution that people thought was impossible.

Hiroshima has called for peace through non-violence. Your father chose force of arms.
Whether or not arms are used is a matter to be decided by the people who live in that country. It is unfortunate that, even now, some must resort to force in order to liberate their country. But, for example, it is unrealistic for those of us who aren’t there to tell people in Iraq who are being attacked that they can’t have weapons. I can’t do that.

Cuba has good medical care and education today because we achieved it ourselves, step by step. If, in this way, a country seeks independence and rises up while possessing arms in order to protect something, I will support it.

In Hiroshima your father said, “Aren’t the Japanese people outraged over this atrocity by the United States?”
The situation was different then. This may be related to Japan’s awareness of its responsibility as an aggressor, but when I heard the explanation at Peace Memorial Museum I was concerned that in some ways the people of Hiroshima may have accepted the dropping of the atomic bomb as inevitable. The Japanese made many mistakes and may have committed atrocities, but the victimization of innocent citizens cannot be justified no matter how you look at it.

As a pediatrician as well, I was overcome by a feeling of helplessness wondering why the lives of the children could not have been spared. The use of nuclear weapons is absolutely unacceptable. In order to abolish nuclear weapons, people must engage in dialogue and apply pressure on nuclear weapons states. I would like to see Hiroshima, which has experienced an atomic bombing and can make a worldwide appeal, take the lead in this effort.

Aleida Guevara
Born in Havana, Cuba in 1960, Aleida Guevara is the daughter of Che Guevara and his second wife. She is a pediatrician who also serves as a goodwill ambassador for Cuba. She is involved in the management of the Che Guevara Studies Center in Havana and also takes part in efforts to provide medical support to communities in Africa and South America.