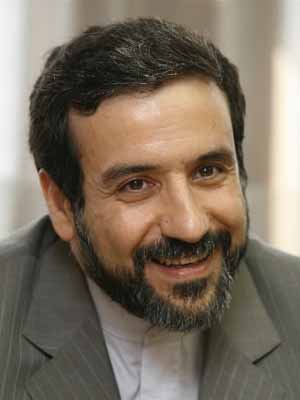 The Chugoku Shimbun spoke with Seyed Abbas Araghchi, 45, the newly appointed ambassador to Japan from Iran, during his visit to Hiroshima on May 21. While the United Nations Security Council has on three occasions issued sanction resolutions against Iran for its nuclear development, including the enrichment of uranium, Iran has stressed that it intends to use nuclear power for peaceful purposes. Ambassador Araghchi reiterated this position while in Hiroshima. The following are summarized comments of his remarks.

Why did you decide to make Hiroshima the first city you visited after assuming your duties?
Hiroshima is a symbol of peace. I wanted to express my deep respect and sympathy for the people of Hiroshima. I also want the people here to see the true face of Iran as a peace-loving country. Many negative news reports have said Iran is developing nuclear weapons, but they are mistaken. The purpose of our nuclear enrichment is the peaceful use of nuclear power not the development of nuclear weapons.

What were your feelings when you visited Peace Memorial Museum?
I can’t put it into words. I was particularly shocked by the photos taken just after the bombing. People whose skin was burned and peeling off their bodies, the terrible wounds to their faces…those people reminded me of the victims of poison gas in the [1980-88] Iran-Iraq War. In fact, I lost many friends in that war. Some of my best friends lost their legs or lost their eyesight.

I understand Iran submitted a new proposal to the permanent Security Council members and Germany in May.
This proposal includes Iran’s desire to actively cooperate with the international community on global problems such as nuclear non-proliferation and measures to combat drugs and terrorism. With regard to nuclear non-proliferation, the proposal calls for an enhanced Nuclear Non-Proliferation Treaty (NPT) system and tighter monitoring by the International Atomic Energy Agency.

Will Iran stop its uranium enrichment activities?
Nuclear development is permitted by the NPT and Japan uses nuclear power. The Security Council’s resolution deprives Iran of its rights and is unfair. I would like the government of Japan, which is a friend to Iran, to support Iran’s position at the [G-8 Hokkaido Toyako] summit.

What sort of relationship do you seek with Hiroshima?
I have heard about a team of doctors and citizens from Hiroshima who are providing support to Iran’s poison gas victims. I would like to strengthen Iran’s ties with Hiroshima at the city level through friendly soccer matches and cultural exchanges and visits by the mayors of Hiroshima and Tehran to each others’ cities. Such relations with Hiroshima and Japan can help promote understanding of Iran and make its spirit of peace known to the world.

Seyed Abbas Araghchi
Born in Tehran in 1962, Araghchi has a Ph.D. in Political Thought from the University of Kent, England. He joined the Ministry of Foreign Affairs in 1988 and was appointed ambassador to Finland in 1999. He was named rector of the School of International Relations (Tehran) in 2004 and appointed Deputy Minister of Foreign Affairs in 2005. He arrived in Japan in February prior to taking up his appointment as ambassador in March.
ツイート
Return