Hiroshima Memo: The Importance of Networking 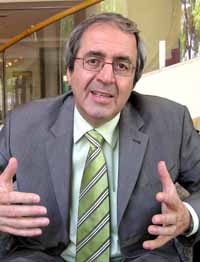 Belgium was the first country in the world to enact the law banning cluster munitions and the law banning depleted uranium (DU) weapons, in 2006 and 2007, respectively. For many years, the nation has been actively engaged in global disarmament and the international peace movement. Despite its size--Belgium’s population is approximately 10 million and its territory is one-twelfth that of Japan, smaller than the Japanese island of Kyushu--its influence on the world is anything but small.

“The enactment of the law banning inhumane weapons, including the law banning antipersonnel land mines in 1995, is attributable to the Belgian people’s experience with war and the close cooperation between NGOs and Members of Parliament (MPs),” explained Belgian MP, Dirk Van der Maelen, 55, when I met him at a hotel in Hiroshima.

Belgium is situated at the heart of Europe and its neighboring countries, including Germany and France, fought on Belgian soil during the First and Second World Wars. During World War I, in particular, Ieper, a city in the western part of Belgium near the French border, became a major battleground in the fight between Allied Forces and Germany and scores of soldiers and civilians perished. It was also in Ieper, and nearby battlefields, that German troops used chemical weapons for the first time in the world in 1915.

“After the devastating experience of World War I, it was natural that the Belgian people would call for a ban on chemical weapons,” said Mr. Van der Maelen. “The growing consensus on the ban led the Belgian government to take an important role in drafting and concluding an international convention (the 1925 Geneva Protocol).”

In 1933, a law was enacted to limit the manufacture, possession, and trade of weapons in Belgium. According to Mr. Van der Maelen, this law (modified in 2006 to include a restriction on economic investment) has formed the legal basis for banning inhumane weapons, including DU weapons.

Mr. Van der Maelen compiled a bill to ban DU weapons in cooperation with NGO groups and submitted it to the Belgian Parliament in 2006. MPs who favored the bill worked together regardless of their party affiliation while NGOs lobbied MPs for the bill. “The MPs and NGOs worked closely in many ways,” said Mr. Van der Maelen, “including strategies to elicit support for a ban on DU weapons from MPs who had been opposed to such a ban and from the Belgian government, which was unwilling to support the ban out of its special consideration for the U.S. as a member country of NATO (North Atlantic Treaty Organization).

The next challenge for Mr. Van der Maelen and his colleagues is to extend the Belgian ban on DU weapons into an international convention in cooperation with other countries and NGOs.

Mr. Van der Maelen is also a member of the Parliamentary Network for Nuclear Disarmament (PNND), an international group comprising MPs against nuclear weapons. It seems to Mr. Van der Maelen that the Japanese NGOs and Diet members calling for disarmament and peace “are not working closely enough together.” “Owing to the commitment of Belgian citizens and NGOs to eliminate nuclear weapons and achieve world peace, over 300 cities in Belgium responded to the call from Hiroshima and Nagasaki to participate in Mayors for Peace,” stressed Mr. Van der Maelen. It stands to reason that Ieper now serves as the 2020 Vision Campaign International Secretariat of Mayors for Peace.

There are many NGOs in Japan. These NGOs, however, have not been working closely enough with Diet members, the decision-makers of Japanese policy, by lobbying at either the state or local level. Mr. Van der Maelen used to be a grass-roots activist for peace and human rights until he was elected MP in 1989. He is currently the deputy leader of the Flemish Social Democratic Party. Mr. Van der Maelen believes that close networking between MPs and NGOs is essential if disarmament, peace, human rights, environmental, and other problems are to be solved.

“A democratic society can only be formed when many citizens participate in politics. Independent citizens and NGOs must increase their cooperation with MPs or their efforts will never be reflected in national policies. They must contemplate what can be done to bring peaceful, comfortable living conditions to local, national, and international communities.”