Editorial: Treaty on cluster bombs serves as a milestone toward total abolition 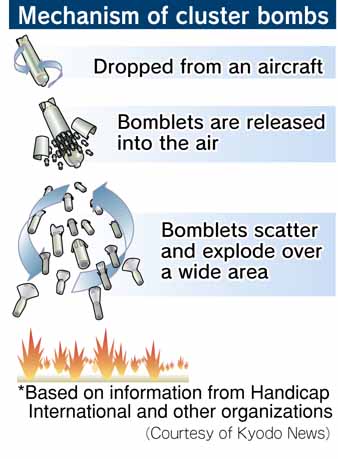 With their large numbers of unexploded bomblets, cluster bombs kill and maim indiscriminately. A treaty banning the production and use of nearly all types of cluster bombs, the Convention on Cluster Munitions, was adopted at an international conference held in Dublin, Ireland in May 2008. Although the United States, Russia, China, and other nations with cluster bombs failed to take part in this conference, the text of the treaty was approved by approximately 110 countries, including Japan.

Initially, the Japanese government had advocated a partial ban which would still permit the kind of advanced cluster bombs possessed by the Japan Self Defense Forces, as this weapon is believed to be effective as a deterrent to invasion by sea. In addition, apprehensions were raised that the ban could restrict joint military operations with U.S. forces. However, when a provision was added to the treaty that does not prevent signatories from engaging in military cooperation with non-participating nations, Japan ultimately changed its stance. It appears that Prime Minister Yasuo Fukuda’s determination to embrace the treaty won out over competing concerns.

The conference in Ireland was the culmination of an initiative launched in February 2007 by the government of Norway, along with support from like-minded nations and NGOs. The cluster munitions ban process has taken the same path as the 1997 Ottawa Treaty, which bans anti-personnel land mines, by skirting the United Nations to avoid vetoes and reach a more timely pact. In the case of the Ottawa Treaty, too, Japan had initially been hesitant to endorse the agreement, but with the backing of then Foreign Minister Keizo Obuchi, the nation became a signatory and Japan’s participation helped fuel momentum for the ban on land mine use.

Cluster bombs are released into hundreds of bomblets that disperse through the air and fall over a broad area. Along with land mines, cluster bombs have been dubbed “the devil’s weapon” due to the fact that unexploded ordnance is strewn over residential areas and farm land and causes immense damage to unknowing civilians who come into contact with these explosive devices.

The text of the treaty is groundbreaking. Over 90% of all cluster bombs now existing in the world are prohibited under the treaty, though exclusion is made for the latest types that are able to automatically disarm themselves if they fail to explode upon impact. The treaty also stipulates that assistance will be provided to victims of these weapons.

Until the final day of the Dublin conference, Japan had remained reluctant to endorse the treaty as the government was still focused on negotiations at the United Nations over the Convention on Certain Conventional Weapons (CCW), which the United States and other absent nations have pursued. However, the Convention on Cluster Munitions was in fact initiated due to insufficient progress made in regard to the CCW agreement. If Japan had left the impression, by remaining passive through the proceedings, that the nation was failing to exercise leadership and simply following the lead of the United States, this would have been extremely regrettable.

By December 2008, when the new Convention on Cluster Munitions is set to be signed, Japan should show the world a more active posture. First, Japan must move to dispose of thousands of cluster bombs stockpiled by the Self Defense Forces. Although contingency plans may lie behind their possession, using cluster bombs around the perimeter of Japan in the event of invasion is not a realistic tactic. Furthermore, Japan should make greater efforts to assist nations in need with its advanced mine detection technology to rid those areas of unexploded ordnance. At the same time, Japan can support the sufferers of such countries with its expertise in the fields of medicine and rehabilitation.

Urging countries that have not yet committed their support to the Convention on Cluster Munitions constitutes another pillar of the treaty. The vast majority of the world’s nations have expressed their will in regard to rejecting the development and possession of these weapons. Backed by this global will, Japan should strengthen its stance towards such military powers as the United States, Russia, and China and make this treaty a milestone toward the total abolition of cluster bombs. This is the international contribution that Japan should fulfill.
ツイート
Return