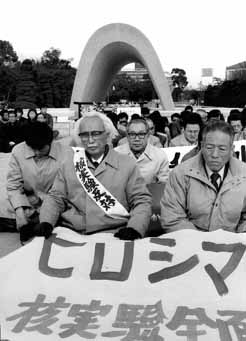 “From a civilization of power to a civilization of love”…these are the words of Ichiro Moritaki (1901-1994), who experienced the atomic bombing of Hiroshima and became known as “the father of the anti-nuclear movement.” Every time a nuclear test was conducted somewhere in the world, Mr. Moritaki, Professor Emeritus of Hiroshima University would sit in protest in front of the Cenotaph for the A-bomb Victims in Hiroshima Peace Memorial Park. Reflecting his contemplations as a philosopher and his experiences as a peace activist, he also remarked, “A chain reaction of spiritual atoms must overcome the chain reaction of material atoms.”

With his shock of white hair and cane, even as his legs grew frail in his later years, Professor Moritaki continued to stage sit-ins. Never daunted by the grim situation of nuclear weapons, which showed no sign of improving, the aging A-bomb survivor remained resolute. His stance conveyed a strength of will and a dignity of the human spirit that inspired people beyond the words he spoke.

Fourteen years have gone by since Professor Moritaki passed away. During this period, though the number of nuclear tests has decreased significantly, the number of countries in possession of nuclear weapons, in contrast, has grown. And, to this day, the “civilizations of power,” manifested by some nations’ adherence to the doctrine of nuclear deterrence, continue to hold sway in the world. In fact, with the development of smaller nuclear warheads, the possibility that nuclear weapons will again be used is now higher than ever.

A nation that “protects its people with nuclear weapons” also “exposes its people” to a nuclear attack by an imagined enemy. But the people of that nation are not the only ones endangered. At the same time, the entire human species is “held hostage” due to the devastating power of nuclear weapons and the wide-ranging effects of their “ashes of death,” the radioactive fallout, which respect no national borders.

We should not tolerate the reality that nuclear weapons, which could lead to the very extinction of humankind, are left in the hands of a small number of nations or people in power.

Mayors for Peace (president, Hiroshima Mayor Tadatoshi Akiba), with nearly 2,300 member cities to date, in 129 countries and regions, is urging the world to abolish nuclear weapons by the year 2020. In response to an appeal from Hiroshima and Nagasaki, cities around the world, one of whose crucial duties is to protect the lives and property of their citizens, are now calling for the elimination of nuclear weapons. This movement is an attempt to resolve an urgent global problem, not through force, but through a “civilization of love.”