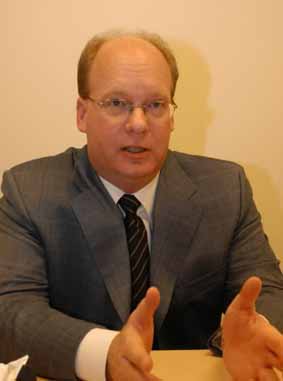 In January 2007 and January 2008, four former senior U.S. officials, including George Shultz and Henry Kissinger, who both served as U.S. Secretary of State, called for “a world free of nuclear weapons” in op-ed articles in the Wall Street Journal, producing a notable impact on the world. What is the significance of these senior officials, who once backed U.S. nuclear policy, now appealing for nuclear abolition in a bipartisan manner? Steven Andreasen, 47, former Director for Defense Policy and Arms Control on the National Security Council during the Clinton administration and one of the endorsers of the op-ed articles, spoke with the Chugoku Shimbun about the importance of these statements.

Could you talk about the background behind the release of the op-ed pieces?
The first op-ed appeared in January 2007 and that piece was the result of a conference which was held in October 2006 at the Hoover Institute on the campus of Stanford University. The conference was organized by former Secretary of State Shultz on the occasion of the 20th anniversary of the Reykajavik summit meeting which took place in Iceland between President Reagan and President Gorbachev in October 1986. At that historic meeting, Reagan and Gorbachev shared a vision of abolishing nuclear weapons and they nearly reached agreement on doing exactly that.

So, 20 years later, Secretary Shultz decided that he wanted to reconvene many of the members of the Reagan administration who had participated in nuclear issues in the Reykajavik negotiations. Basically, we reflected on Reagan and Gorbachev’s vision of a world free of nuclear weapons and discussed whether this vision was relevant in terms of today’s security threats.

The conference took place over two days and the largely consensus view of the 20 or 25 participants is that the vision of the world without nuclear weapons was very relevant to today’s security climate and that this vision should be connected to practical steps that could be implemented toward its fulfillment.

After the conference, Secretary Shultz and others felt committed to put in writing the conclusions that had come out of the meeting. These conclusions were reflected in the first op-ed piece that appeared in the Wall Street Journal in January 2007.

President Gorbachev, in fact, wrote a piece later that same month in the Wall Street Journal which basically reaffirmed his support for the vision of a world without nuclear weapons, along with the step-by-step approach our own op-ed had advocated.

Almost immediately after the first op-ed was published in January, we started to think about how we could further advance this agenda. And so we decided to hold a second conference, which took place in October 2007. At this meeting, we delved into the details as to advancing both the vision and the practical steps. And the second op-ed piece, published in January 2008, conveys these ideas for moving in the direction of that vision.

Would you explain how Secretary Shultz and the other "Cold War warriors" view today’s world in terms of nuclear threats?
I think the four principal signatories recognize how the threat has changed.

First, there are more states with nuclear weapons or states that are motivated to possess these weapons. And there is no guarantee that the idea of deterrence, which worked between the U.S. and the former Soviet Union, will still work in this new nuclear environment.

Second, the rise of non-state actors or terrorists is a development that has primarily arisen since the end of the cold war. The possibility that terrorists might get their hands on a nuclear weapon is obviously a huge new threat.

And third, the increasing interest in nuclear energy and the spread of this technology to produce fuel for civilian nuclear power. As you know, the same technology can be used to produce the materials for making bombs.

The other thing is, we still basically have the large residual threat from the Cold War between the U.S. and now Russia. Even well after 15 years since the Cold War ended, despite the fact that these nations declare that they are no longer enemies, they still deploy hundreds of ballistic missiles at one another with thousands of nuclear warheads.

At the same time, it’s also true that some of the steps specifically articulated by the authors of the op-ed pieces have not been embraced by the current administration. For example, the administration has not taken any steps to bring the CTBT (Comprehensive Test Ban Treaty) into force, either by ratifying it themselves or by encouraging other states, like China, to ratify it.

The general conclusion of our conferences is that the policies pursued over the last two decades by the U.S. and the rest of the world are insufficient for meeting the peril of nuclear weapons today. And the op-ed pieces very explicitly say: We need to do more.

The good news is that both U.S. presidential candidates seem to recognize that the threat has changed and that new initiatives are needed beyond what is being done today. This is very encouraging.

Do you think the two articles have impacted U.S. public opinion, too?
I believe these opinion pieces have expanded the space in the U.S. for dialogue and, most importantly, action. I think they have helped push the consensus that we are not doing enough, we need to be doing more, and here is the direction.

In the second piece to appear in the Wall Street Journal, the expression “the top of the mountain” was used to convey the idea of a world which is free of nuclear weapons. In fact, right now we’re going down the mountain and we need to start looking, instead, for the path that will lead back up. It will obviously take some time to get from where we are today to the top of the mountain, but the specific steps that have been recommended will build confidence in a more peaceful international order in which the present reliance on nuclear weapons is diminished.

As the only nation to have experienced the devastation of nuclear weapons, what role should Japan play in pursuing a world that is free of these weapons?
Japan has been a leader for many years on issues related to nuclear weapons and I think Japan should continue to serve in a leadership role as we approach a number of important benchmarks in international affairs, both politically and with respect to agreements in the area of nuclear weapons.

The U.S. will hold a presidential election this November, ushering in new leadership early next year. And then there is an important review conference for the NPT (Non-Proliferation Treaty) in 2010. Already countries are starting to shape the agenda for that conference. Certainly the British position, articulated last summer, is an important push towards trying to strengthen the commitment to nuclear disarmament going into the review conference.

So I think it’s important for Japan, reflecting on the changed threat environment we find ourselves in today, to look into the future and consider how it might uniquely contribute to the process of realizing a world free of nuclear weapons.

Steve Andreasen is an advisor to the Nuclear Threat Initiative and a lecturer at the Humphrey Institute of Public Affairs at the University of Minnesota. He served as Director Defense Policy and Arms Control on the National Security Council at the White House from February 1993 to January 2001 and was the principal advisor on strategic policy, nuclear arms control, and missile defense to the National Security Advisor and the President.

Keywords
Op-ed articles in the Wall Street Journal
The two op-ed articles, “A World Free of Nuclear Weapons” and “Toward a Nuclear-Free World,” were signed by George Shultz, Henry Kissinger, William Perry, former Secretary of Defense, and Sam Nunn, former Chair of the Senate Armed Services Committee. The January 2008 commentary included the following proposals: extend key provisions of the Strategic Arms Reduction Treaty of 1991; discard any existing operational plans for massive attacks that still remain from the Cold War days; and dramatically accelerate work to provide the highest possible standards of security of nuclear weapons, as well as for nuclear materials everywhere in the world.