Growing old, A-bomb survivors are committed to their testimony activities 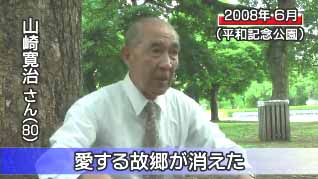 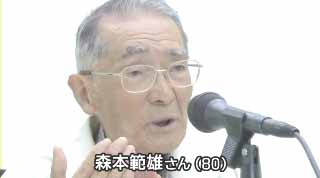 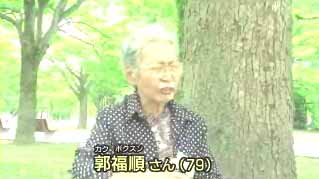 Currently, there are 19 groups of A-bomb survivors in the city of Hiroshima who deliver testimonies on their experiences of the atomic bombing. The survivors share their stories with mainly elementary school students and junior high school students visiting Hiroshima on school field trips. The Chugoku Shimbun filmed three A-bomb survivors speaking at Hiroshima Peace Memorial Museum. The children listening to their talks are from the Kansai region of Japan.

The neighborhood I loved was suddenly gone

Kanji Yamasaki, 80, lives in the suburbs of Hiroshima. Mr. Yamasaki was exposed to the atomic bombing 1.5 kilometers from the hypocenter while at Hiroshima Second Middle School, now known as Kanon High School. He was 17 years old at the time.

This area is now Peace Memorial Park, but before the atomic bombing it was a community, a lively part of the city. My house was located near the entrance to Hiroshima Peace Memorial Museum.

When I was a boy, I would rush down to the Motoyasu River after school to catch eels, crabs, and shrimp. So when I come to Peace Park, I’m reminded of those fond memories from my childhood. At the same time, though it’s a beautiful park, I can never really feel nostalgic. The place where I grew up is gone--the war took it away. I hope you will keep this in mind. I hope you will help create a world where hometowns everywhere can be preserved.

During the war, I was attending a university in Tokyo. Heavy air raids, though, forced me to leave Tokyo and return to Hiroshima. Because of the danger, it had become impossible to study in Tokyo. At that time, everyone who was in the third year of junior high school or older was mobilized for the war effort. I was told to teach the first-year students at Hiroshima Second Middle School, where I trained the students in such things as saluting and forming lines.

On the morning of August 6, 1945, I went to the school to do some clerical work. When I arrived, it must have been 8:15 because as I was handed the key to my room, there was an enormous flash of light. I have no memory of what happened right after that. I had no time to say anything. When I came to, I found myself trapped under the wreckage of the school building and I couldn’t move.

Somehow, though, I managed to free myself and stand up. I was stunned to find that my body was covered with some kind of black liquid, like ink. It was dreadful. The black liquid was dripping down my arms. Later, I learned it was “black rain.” Then I saw a horrific scene of dead bodies. But the fact that these were human beings, it was just unimaginable. They looked like the carcasses of animals: some had no eyeballs and the abdomens of others were split open. I assumed that a bomb had hit the school, but I had no idea what had really happened.

The next day, I managed to crawl back home, which was located near here. In this area I saw great numbers of reddish-black bodies, laid out in rows. And the rivers were full of bodies, too. No one was alive except for me--it was a world of the dead. On August 6, the day the bomb was dropped, the first-year students of Hiroshima Second Middle School, who I had been instructing, were mobilized to dismantle houses in the Nakajima area to create firebreaks in case of air raids. That area is near the east end of the West Peace Bridge. The students were clearing the area of roof tiles when the bomb, a single bomb, claimed the lives of all the first-year students at the school, over 300 children.

And because of the atomic bomb, I became an orphan--I lost everyone in my family. The bomb took everything: all my family and all my money. Still, one thing did remain--friends. My friends have supported me throughout my life. There are some things that we can talk about with our friends, but we can’t with parents or teachers. My friends have always been there for me and this is why I have been able to survive to today.

What can be done to make Japan a more peaceful nation? Hiroshima is the right place to ponder this question.

Norio Morimoto, 80, is a resident of Nishi Ward, Hiroshima and he experienced the atomic bombing at the age of 17 near Hiroshima Red Cross Hospital, 1.1 kilometers from the hypocenter.

At the time, I was working as a substitute teacher at an elementary school. Around the beginning of August 1945, I started feeling some pain in my chest so I was going to the hospital regularly for treatment. On the morning of August 6, I happened to run into a friend at the streetcar stop near the hospital. We hadn’t seen each other in a long time and we were chatting as we walked along, side by side. I’m not sure why, but I then stopped walking and turned to face him. In the next moment, at 8:15, the bomb exploded and there was a huge, blinding flash, a light much brighter than the sun on a fine day.

I had no idea what was happening, but I was sure such an enormous flash meant it was some kind of attack. After seeing the flash and remembering the safety drills I had participated in, I instinctively covered my eyes with my hands. And then, when I moved to cover my ears, there was a tremendous boom. It was completely different from any other loud sound I can imagine.

I then blacked out and I don’t know how long it was before I came to. I tried looking around, but there was no light at all--it was nearly pitch dark. Before the flash, it had been as bright as the room we’re now sitting in. After the explosion, the mushroom cloud rose into the sky. It was an eerie cloud and I was right below it. It was so dense no light could penetrate it. My friend died right there on that spot.

I’m so grateful that I managed to survive and I now realize how precious life is. I would like you all to understand that this is what I really want to say. Please don’t think, “I feel sorry for him because he was burned and injured.” I’m not talking to you today to gain your sympathy. I’m actually a very positive person and I don’t let life get me down. Rather, by hearing my story, I hope you will see that this is what can happen to you, too, if there’s another war. And if war does break out, the dreams you now treasure will all disappear, just as mine did.

I harbor guilt for having survived

Kawk Bok-soon, 79, lives in Nishi Ward, Hiroshima. She experienced the atomic bombing at the age of 16 at Otemachi, Naka Ward, 900 meters from the hypocenter.

On the morning of August 6, 1945, Mrs. Mitoki, a woman who ran a lodging house in the neighborhood came to my house and said, “Shall we go get our share of rationed rice?” At the time, all the food was being rationed and distributed behind schedule. I was about to go to sleep, actually, but she suggested that we go together to get our rice.

Mrs. Mitoki was standing right outside the house so I moved quickly to change my clothes. As I was about to dash into the bathroom, before putting on my baggy work pants, I heard an announcement on the radio: “The air raid warning has been lifted, but remain on alert as one large aircraft is still circling over Hiroshima.” I didn’t take it seriously, though. I was just thinking that I shouldn’t keep the woman waiting. I thought, “No matter how big it is, one single plane couldn’t be here to drop bombs. It’s probably going to scatter leaflets or something.” When I came out of the bathroom, I started putting on my pants, putting on one pants leg. That’s when the house collapsed and I was pinned under the wreckage.

“When a bomb explodes, the blast may break your ear drums or pop out your eyeballs. So lie low to the ground and cover your eyes and ears with your hands.” These were instructions from the safety drills we had experienced on a daily basis, so, despite being buried under the rubble, I tried to assume this position. I had no idea what had happened and naturally couldn’t have imagined what had really taken place. But since I thought a bombing raid was the likely cause, I kept my eyes and ears covered up. I couldn’t seem to move my body, though.

I wondered if I was the only one who had been hit or if the attack had struck others, too. I yelled for help and then waited quietly for the sounds of someone approaching. I suspect it was only a short time, but that silence was incredible. It was totally silent, even tranquil. I then yelled again several times. Finally, I began to hear screams. Those screams were so chilling that they seemed to come from some kind of supernatural world.

I knew, at that point, that I wasn’t alone, that other people had also been hurt. I don’t know how I managed it, but I then freed myself from the rubble of the house. I suppose, in such an emergency, that some sort of special strength rose up from within me.

When I crawled out from the wreckage, I discovered the whole city was pitch dark. Gradually, I could begin to make out things in the darkness and I found that all the houses, as far as I could see, had collapsed.

I saw, too, that small fires had sprung up over the landscape. In the gloom I finally noticed that Mrs. Mitoki was standing about ten meters from the wreckage of the house. She was now stark naked and she said, “I’m burning up.” She seemed in shock and brought her hands up to her face. It looked a balloon had popped and was stuck to her cheek. Later I learned that a patch of burnt skin had blown up to her face.

I hope you will pass on what I have told you today. When the time is right for you, perhaps when you’re older, I hope you will share the A-bomb experience with others.