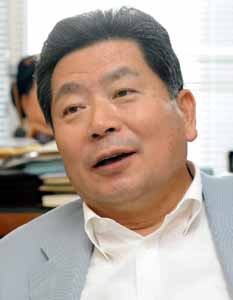 A group of lawmakers from both the ruling and opposition parties has been formed in an effort to attract the operations of UN and other international organizations to Hiroshima. The group is particularly intent on inviting organizations engaged in peace building and nuclear weapons abolition. The Chugoku Shimbun interviewed the head of the group, Hidenao Nakagawa, about the group’s vision for their work. Mr. Nakagawa is from Hiroshima’s 4th constituency and is a former secretary-general of the Liberal Democratic Party.

What is the purpose of this group?
Japan’s contribution to the UN is substantial, but it hasn’t been exerting comparable influence. Peace building and nuclear disarmament, eventually leading to abolition, are two areas in which the UN should strengthen its efforts and Japan can play an important role in this development. So we hope to base more international organizations in Hiroshima in connection with this UN reform.

What sort of organizations are you seeking to attract?
We would like to create a framework in which the experiences of the Japanese people, including experiences related to the atomic bombings, along with our nation’s knowledge and skills, can be used to help raise an infrastructure of peace building. Peace in the world cannot be realized solely through military strategies. We need to create an environment in which all people can live together harmoniously. In this regard, the issues of global warming and shortages of food and water should also be given high priority. The UN’s work must involve not only national governments, but local governments, too, as well as civilian organizations, such as NGOs. And military forces should not be excluded from play a part. They could contribute toward peace by assuming new roles in the medical sphere and other non-military fields of UN peacekeeping operations.

What is the significance of bringing these organizations to Hiroshima?
By engaging in peace issues and promoting a global campaign for the elimination of nuclear weapons, we can create a powerful groundswell for change. One of our responsibilities to the A-bomb victims and survivors of Hiroshima is to make the city an attractive destination so that younger generations from around the world will feel moved to come to Hiroshima for the opportunity to contribute to society and to peace.

Are you considering specific sites as potential locations for these organizations?
Hiroshima Municipal Stadium, which will be vacant from 2009, is an ideal site since it’s located near the A-bomb Dome. In fact, after the war, the stadium was built for baseball games to encourage the citizens of Hiroshima to make efforts toward reconstruction and peace. So, even after a new stadium opens next year, the old stadium should be used for peaceful purposes of some kind. And local businesses have expressed their support for this effort. I think we can gain the backing of people not only in Hiroshima but across Japan, too.

Cooperation with the city of Hiroshima and Hiroshima Prefecture is naturally important, too.
Yes, but we haven’t spoken with them yet. We first need consensus within our group. I hope to deliver our vision of this idea at the G8 Summit of Lower House Speakers to be held in Hiroshima in September. We also hope Prime Minister Yasuo Fukuda will formally announce the government’s support at a meeting of the UN General Assembly. At the same time, we will seek suggestions and ideas from the local governments and citizens.