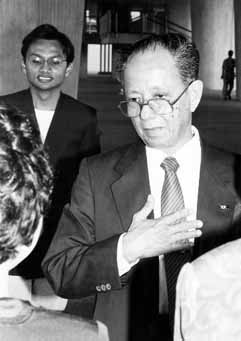 by Yushi Utaka, Associate Professor at the University of Hyogo

I met Mr. Razak when I was a research fellow at the Universiti Sains Malaysia (Science University of Malaysia) and I learned that he is the father of the vice-chancellor of the university.

Mr. Razak is also known as the “father of Japanese language education” in Malaysia. It is said that the pressure imposed on the ethnic Malay people by the Japanese military at that time was not so severe, but the situation was still a complicated one. A Malaysian friend expressed bewilderment over Mr. Razak’s actions, saying, “He was exposed to the atomic bombing in Hiroshima after the Japanese authorities made him study in Japan. And there was anti-Japan sentiment in the air in Malaysia. Given all this, how could he still have promoted the Japanese language?”

I myself had simply considered the Southeast Asian Special Students to be people of a past era. But how had Mr. Razak lived his life after the end of World War II? To find out, I visited him where he now lives, in a suburb of Kuala Lumpur, the capital of Malaysia.

After he returned to Malaysia, Mr. Razak showed no ill effects from his exposure to the A-bomb’s radiation and so he enrolled in a teachers’ college. The nation was experiencing the dawn of its movement for independence from British rule and he and his friends took part. “I urged people to study hard to help the nation achieve independence,” Mr. Razak recalled. “I also spoke about the philosophy behind the Greater East Asia Co-prosperity Sphere.” In 1957, Malaysia became an independent state. The young multiethnic country declared Islam to be its state religion and began to enhance its Malay culture.

Through the elation of that period, Mr. Razak taught Malay, designated as the national language of the newly independent nation, in various schools. “Language is not simply a tool,” he told children, “it embodies the philosophy of the nation.” In 1976, he suddenly became a well-known figure nationwide when he appeared on a series of TV programs about Jawi, the Arabic letters for writing Malay, aired by the national TV station. Looking back at that time, Mr. Razak smiled and acknowledged, “It was kind of embarrassing.”

In the 1980s, as a result of the Look East Policy under the Mahathir administration, Mr. Razak was selected to head up a university’s Japanese language program. During this period, international exchange between Japan and Malaysia grew. When former Prime Minister Yasuhiro Nakasone visited Malaysia, Mr. Razak was awarded a special decoration for his work.

After serving as a bridge between Japan and Malaysia through his activities promoting Japanese language education, Mr. Razak retired from university life in 1997. Today he spends his time as an imam at a mosque and continues to recall his days in Hiroshima. As he remembers it, the Japanese people he knew were all very kind and full of life. And whenever he thinks of Hiroshima, the images of old friends flash in his mind. “I miss them,” he says. “I hope I’ll have the chance to see them again.”

Mr. Razak often reflects on present-day Hiroshima, too. We spoke about the ongoing debate over the A-bomb Dome environs as we looked at pictures of this World Heritage site. Mr. Razak, who witnessed the devastation wrought by the atomic bombing, remarked, “Hiroshima is a new city now so constructing these new buildings isn’t a bad thing.” He appears to welcome the renewed cityscape as a manifestation of the city’s reconstruction. At the same time, he reveals a deeper layer of feeling when he says, “I saw the devastation of the city with my own eyes.”

From Malaysia, “Special Student” Abdul Razak continues to keep an eye on the “new Hiroshima” in this 63rd year after the bombing.

Southeast Asian Special Student
During World War II, approximately 200 students from Southeast Asian countries were brought to Japan to nurture leaders for the Greater East Asia Co-prosperity Sphere vision. Among these students, 24 students attended Hiroshima University of Literature and Science and two of them died in the atomic bombing.

Yushi Utaka is an Associate Professor at the University of Hyogo. He served as a research fellow at Universiti Sains Malaysia for two years starting in 2001, after working as a research associate in the Department of Engineering at Hiroshima University. He also serves as a resource person for the World Heritage Training Program organized by UNITAR. Dr. Utaka was born in Hyogo Prefecture in 1969 and attended Kyoto University Graduate School.