Hiroshima Memo: Handing Down the Experience of Hiroshima and Nagasaki 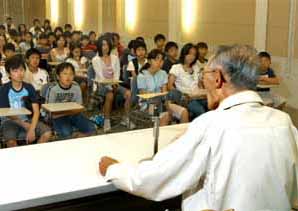 For many years people have been saying that the memory of the A-bomb experiences of Hiroshima and Nagasaki are fading. In 1973, teachers and school employees who experienced the atomic bombing of Hiroshima organized the “First National Symposium on Peace Education” and urged educators nationwide to take part in the event. They initiated this activity due to a sense of crisis that “the memory of Hiroshima and Nagasaki has already begun to be forgotten.” The annual symposium continues to be held to this day.

When the first symposium on Peace Education was held, a large number of teachers and staff who experienced the atomic bombings were still working in schools. At the same time, references to the bombings grew fewer in number in school textbooks as a result of influence from the Education Ministry. To counter this development, committed teachers with experience of the bombings began to convey to their students the horror of the A-bomb and the importance of peace. By going so far, in some instances, as to reveal the keloids on their bodies, these teachers strove to realize their desire for “No more Hiroshimas.”

Today, 63 years after the bombing, people continue to say that “the A-bomb experience is fading.” But the present is significantly different from 35 years in the past in regard to the state of crisis. Teachers and school staff with experience of the bombings have retired. Younger teachers who live far from Hiroshima and Nagasaki may not ponder the meaning of the A-bomb experience in the context of human history unless they have been taught about this in school or have studied issues involving nuclear weapons and peace on their own. The reality, though, is that most people have little opportunity to hear about A-bomb experiences in their homes or communities if a relative or neighbor is not nearby to share their personal account.

In order to “hand down the A-bomb experience to future generations,” teachers and parents must first understand the significance of this experience themselves so they can communicate it to the children in their care. Regrettably, schools in Japan that are engaged in peace activities, such as visiting the A-bombed cities on school trips to hear firsthand accounts from the A-bomb survivors and to experience the cities’ Peace Memorial Museums, are comparatively few in terms of the nation as a whole.

The average age of the A-bomb survivors has reached nearly 75 years. Survivors who have been involved in testimony activities, with whom I have had friendly relations, are now passing away, one by one. The voices of the A-bomb survivors, who have witnessed the horror of nuclear war, carry a crucial impact. However, the window of time in which these accounts can be heard firsthand is quickly closing. At this point, more than ever, administrators in education must make stronger efforts to promote peace education activities so the horror of nuclear war--indeed, war itself--can be eradicated from the earth.