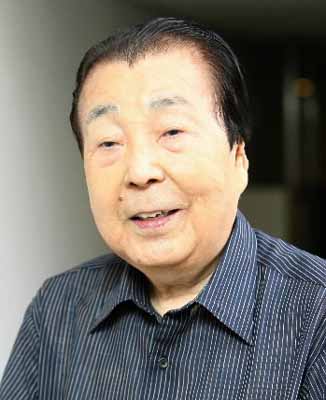 Nuclear weapons are an absolute evil and must be abolished
by Akihiro Takahashi, 77, former director of Hiroshima Peace Memorial Museum

On August 6, 1945, I was 14 and a second-year student at Hiroshima Municipal Junior High School. My classmates and I were waiting for the morning assembly to begin in the schoolyard, 1.4 kilometers from the hypocenter.

An air raid warning and another alert had sounded earlier, but then were called off, so we had no reason to feel concerned. There were perhaps 150 students in the schoolyard, including my class of about 60. Although the alert had been canceled, for some reason a B-29 was flying overhead. I never dreamed it was carrying an atomic bomb.

Just as the head of our class told us to line up, there was a tremendous noise and everything was plunged into darkness. I couldn’t see my hand in front of my face. After a while it grew light, and I came to. I had been blown about 10 meters and thrown to the ground. All the students had been blown about here and there. The wooden schoolhouse had been flattened. The houses and other buildings nearby had been crushed. Buildings off in the distance were also gone. I was astonished.

On that day, many students had been mobilized and sent to an area near the hypocenter to demolish buildings. The atomic bomb killed about 6,300 of them in one fell swoop.

I hate America, with all my heart, for dropping the atomic bomb. At the same time, Japan invaded Asian countries during the war and inflicted tremendous harm. Japan had also kept the Korean peninsula under colonial rule for 36 years causing terrible grief. If both the United States and Japan reflect deeply on their past actions and apologize to each other, then for the first time they will be able to make statements about peace and take constructive action.

Achieving peace, of course, is easier said than done. The path to peace is long and hard. Peace can not be achieved overnight. It must be built patiently by each individual, starting close to home. It must be built one step at a time from homes, from schools, from workplaces, from communities. Peace won’t come to us. If we merely sit and wait for it, it will never happen.

As long as I live I will continue to recount my experiences as an A-bomb survivor and work to bring about peace. From the bottom of my heart, I ask the speakers of the G8 nations and the president of the European Parliament to listen carefully to the appeal from Hiroshima and take substantial steps toward the abolition of nuclear weapons.

Akihiro Takahashi
Mr. Takahashi was born in 1931. He went to work for the City of Hiroshima in 1951. After serving in various posts, including chief of the Public Relations Division, he was named director of Hiroshima Peace Memorial Museum in 1979, a post he held for four years. He is currently serving in various roles, including as a member of the steering committee for the Hiroshima Alliance for Nuclear Weapons Abolition and vice chair of the Hiroshima UNESCO Association. Mr. Takahashi has been recognized for his peace activities as an A-bomb survivor, and in 1991 he was awarded the NHK Broadcasting Culture Prize. In 2005 he received the Hiroshima Municipal Government Contribution Award.