Message to the Speakers of the G8 nations 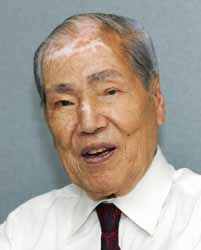 Dear Speakers of the Lower Houses of the G8 nations:

I wish to express my gratitude and my respect for your visit to Hiroshima.

On that day, some 63 years ago, there was a blinding flash in the sky and a massive shock wave that flattened homes. Human beings themselves were blown into the air. Amid mountains of rubble, the dead lay in piles. The survivors wandered through a city in flames.

To this day, those that managed to survive continue to be afflicted by illness wrought by radiation. Although it took many years, the survivors have overcome the suffering of our hearts. Not wanting succeeding generations of the earth to experience the same suffering, we earnestly seek the elimination of nuclear weapons from our world.

Honorable Speakers, as a hibakusha myself, I hold four hopes:

First, with the global community in conflict over the dilemma of nuclear weapons, humanity now faces the grave choice of whether to cling to these weapons or finally eradicate them. As voices for abolition call louder from all quarters of the world, I implore you to take substantial steps to contribute toward this outcome.

Second, although the Nuclear Non-Proliferation Treaty (NPT) is flawed, at present it is our only framework for preventing nuclear proliferation. I ask, then, that the NPT be securely maintained and that the nuclear powers make dedicated efforts to pursuing disarmament.

Third, after returning to your home countries, I would be grateful if you could share your experience of Hiroshima with the people of your nations.

And lastly, I sincerely look forward to welcoming the people of your lands to Hiroshima for visits of their own.

Like the resolve of the A-bomb survivors, the world must never give up on the goal of abolishing all nuclear weapons. Let us now move forward with mutual respect, beyond limited national interest, in order to realize a peaceful future for the entire global community.

Sunao Tsuboi, 83, was exposed to the atomic bombing on a street 1.2 kilometers from the hypocenter. At the time, he was a third-year student at Hiroshima Technical Institute (now, the Faculty of Engineering at Hiroshima University). Mr. Tsuboi taught math and also served as the principal of a junior high school. He was the secretary general of the Hiroshima Prefectural Confederation of A-bomb Sufferers Organizations since 1994, becoming its chairman in 2004. Since 2000, he has also served as the co-chairperson of the Japanese Confederation of A- and H-bomb Sufferers Organization.