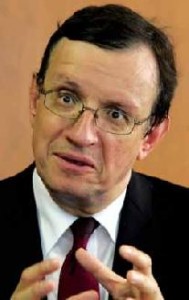 On September 2, British Ambassador David Warren, accompanying British Speaker Michael Martin to Hiroshima for the G8 Summit of Lower House Speakers, visited the Chugoku Shimbun and spoke about the U.K.’s diplomatic efforts as a leading voice for nuclear disarmament.

At the Chugoku Shimbun, Ambassador Warren spoke at some length with Chief Executive Officer Jiro Yamamoto and President Kazuyuki Kawamoto, and then sat for an interview.

Regarding the U.K.’s possession of nuclear weapons, the ambassador commented, “As long as other countries maintain their nuclear arsenals, a minimum of nuclear deterrence is necessary for the security of the United Kingdom.” At the same time, he stressed that “The U.K. intends to play a leading role in promoting multilateral talks and other efforts toward forging a world free of nuclear weapons.”

Ambassador Warren also referred to Mayors for Peace (President, Hiroshima Mayor Tadatoshi Akiba) which now boasts 2,410 member cities around the world. “I evaluate their enthusiastic efforts highly,” he remarked. “I am aware of their 2020 Vision Campaign aiming to abolish nuclear weapons by the year 2020.” From the U.K., 48 cities are now members of this organization.

The ambassador experienced a homestay in Hiroshima 30 years ago, and on the morning of September 2 he visited Peace Memorial Museum again. “I felt anew the suffering of the A-bomb survivors and now feel an even stronger wish for peace.”