Hiroshima Memo: The Impact of Hiroshima on the G8 Speakers 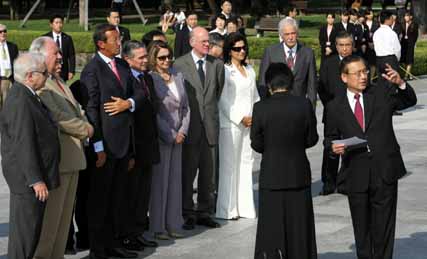 During the luncheon that took place on the day of the G8 Speakers’ Summit, U.S. Speaker Nancy Pelosi apparently said “I can’t thank you enough” to Yohei Kono, Speaker of the House of Representatives of Japan, for his proposal to hold the summit meeting in Hiroshima.

On the evening of September 2, after the day of talks had concluded, she also left a statement in writing which reads “The visit to Hiroshima is a powerful reminder of the destructiveness of war, underscoring the urgency for all nations to promote peace and to build a better world.”

In addition to Speaker Pelosi, participants of the meeting also included the speakers from Russia, the U.K., and France, all of which are nuclear-weapons states. However, media coverage of the summit focused almost exclusively on Speaker Pelosi, third in line from the presidency of the United States, the country that dropped the atomic bombs and maintains the most powerful influence on the world to this day.

While listening to the account of A-bomb survivor Akihiro Takahashi at Peace Memorial Museum, Speaker Pelosi’s facial expressions were caught on camera in close-up, showing quiet emotion which revealed her essential humanity. When she reflects on her children and grandchildren and their future as leaders of generations to come, I have to believe that, deep down, she doesn’t abide by the argument that dropping the atomic bombs was justified in order to potentially save the lives of American soldiers and Japanese civilians.

The A-bombed city of Hiroshima has had a profound impact on numerous foreign visitors, from such prominent politicians as former U.S. President Jimmy Carter and former U.S.S.R. President Mikhail Gorbachev to young people and small children.

For Hiroshima and her citizens, a single bomb brought unimaginable destruction and the long-term aftereffects of radiation. Nevertheless, the A-bomb survivors, overcoming their deep pain and bitterness, have raised their voices to declare that the same mistake must not be repeated anywhere else in the world.

Anyone who touches the spirit of Hiroshima, which conveys a message of reconciliation and peace in place of enmity and violence, ought to be inspired. There are many, too--people both near and far--who have found hope in the example by which a city can shine again after rising from the ashes.

It has been reported that a recent closed-door meeting over the current crisis in Georgia provoked a clash of opinion between Russia on one side and the U.S. and European nations on the other. I believe, though, that no matter how badly each party’s interests conflict, if such negotiations could be conducted in the A-bombed city of Hiroshima, all concerned would surely strive toward a peaceful resolution, rather than resort to force.

The G8 speakers spent little more than a day and a half here, but the fact that the summit was held in Hiroshima is highly significant. I hope that the speakers, back in their own nations, will make productive use of their experience of Hiroshima and work hard to advance the cause of nuclear disarmament and world peace.

Hiroshima now calls on state leaders, including the presidents of the U.S. and Russia, to pay visits to our city, even holding bilateral or multilateral talks at the International Conference Center Hiroshima in Peace Memorial Park. No other place, in fact, is more suitable for a discussion concerning nuclear disarmament and peace.