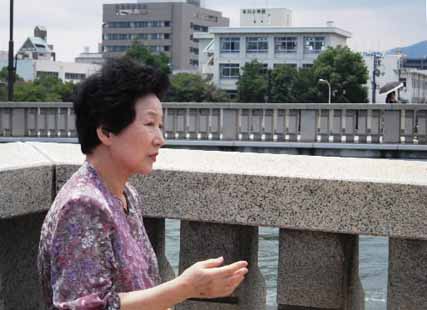 The question of internal exposure

To judge whether the diseases of A-bomb survivors can be attributed to radiation released by the atomic bombs, the Japanese government bases its decision on the certification standard for A-bomb diseases. Class action lawsuits, filed nationwide in Japan by A-bomb survivors and their supporters, are, in part, an effort to shed light on the extent of the A-bomb’s harm, which modern science has yet to fully explain. In the 63rd summer after the bombings, through the feelings of the survivors and the findings of scientists, we reflect on the damage the atomic bombings have brought to human beings.

“What else could explain the symptoms my friends and I have experienced, if the A-bomb is not to blame?” said Kamiko Oe, 79. Ms. Oe is a resident of Hiroshima and one of the plaintiffs seeking certification for A-bomb disease sufferers in a lawsuit at the Hiroshima High Court. After the introduction of a relaxed standard for certification in April 2008, fellow plaintiffs, including those who entered the city center after the bombing, have been receiving notification of their certification. Anxious about her own health, she is hoping her case will be approved, too.

Ms. Oe entered the city center on August 19, 1945 and helped with relief efforts for one week at Honkawa Elementary School, about 350 meters from the hypocenter. She served there with 22 other classmates from Miyoshi Girls’ High School (now, Miyoshi High School).

Of these 23 women, 14 have died from cancer and other diseases. Just last month, one woman died of leukemia. After Ms. Oe returned to Miyoshi in the northern part of Hiroshima Prefecture, she suffered hair loss and lethargy. Since her 30s, she has contracted four types of cancer, including breast cancer, and leucopenia, a decline in the white blood cell count. She applied for certification twice, but was rejected both times. Then she joined the class action lawsuit and won nullification of her rejection in the Hiroshima District Court ruling in 2006.

In the central government’s criteria for certifying A-bomb disease sufferers, a system of estimation called DS02 is used to calculate each person’s radiation dose from the initial radiation released during the first minute after the blast based on that person’s distance from the hypocenter and other factors. According to this system, those who entered the city center sometime after the explosion, like Ms. Oe, should not have experienced acute symptoms such as hair loss or diarrhea.

So, how can the symptoms of Ms. Oe and her classmates be explained? The court rulings in the class action lawsuits have recognized the possibility of internal exposure to residual radiation.

But the effects of internal exposure have not been conclusively proved. The perception of symptoms differs from person to person, making it hard to accurately evaluate the radiation dose. In their appeal at the Hiroshima High Court, the government contended that the court’s ruling “overestimated the effects of internal exposure,” arguing that infection and stress were factors that brought about the survivors’ hair loss and diarrhea.

Today, 63 years after the bombing, Shoji Sawada, professor emeritus of physics at Nagoya University, is conducting research to clarify, scientifically, the effects of internal exposure. His research is based on the experiences of survivors in the aftermath of the bombing.

Tracing back radiation dose from the incidence

Professor Sawada has been working on a “biological assessment of radiation dose” in which factors such as the incidence of hair loss, diarrhea, skin spotting, and other acute symptoms are used to trace back a survivor’s radiation dose based on research data from the Radiation Effects Research Foundation in Hiroshima.

Those who were not close to the city center at the time of the bombing or who entered the city center after the bombing are thought to have been little affected by the initial radiation. But by Professor Sawada’s calculation, their radiation dose was as high as that of the survivors who were close to the hypocenter, convincing him of the influence of internal exposure.

Yet, not all researchers agree with Professor Sawada. Some point out that the effect of factors other than residual radiation cannot be ruled out.

Masaharu Hoshi, radiation biophysics professor at the Hiroshima University Research Institute for Radiation Biology and Medicine, lays emphasis on the importance of cooperation between medical doctors and experts of physics, biology, and statistics, saying that more efforts to understand the mechanism of internal exposure are necessary.

The work of revealing the reality of internal exposure by residual radiation has just begun.