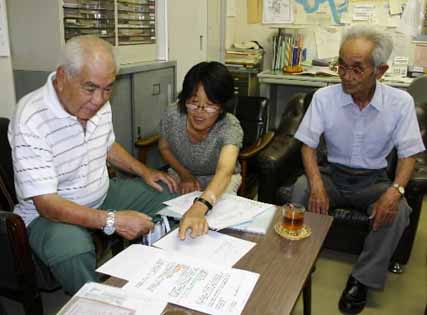 Conflicting views over the effects of exposure

New criteria for the certification of A-bomb diseases were adopted by the central government in April. The conditions were relaxed and, as a result, more applicants have received certification. Still, some diseases, recognized in court rulings as having been induced by radiation, have not been included in the government’s criteria.

Hepatitis not included in the new standard

Hepatitis is a disease not listed for approval in the government’s revised standard.

Hirohiko Kimura, 77, was exposed to the A-bomb while on a street 1.7 kilometers from the hypocenter. After the conflagration in the city died down, he immediately entered the hypocenter area and searched for his elder sister for several days.

Mr. Kimura contracted hepatitis C when he was in his 40s and now sees a doctor regularly for the treatment of his cirrhosis. When he applied for certification as a sufferer of an A-bomb disease, his application was rejected. As one of the plaintiffs of a class action lawsuit at the Hiroshima District Court, Mr. Kimura then won his claim with a ruling that stipulated, “Radiation from the atomic bomb weakened the body’s immune system, leading to the onset and complications of hepatitis C.”

The central government has appealed the ruling and the case is now pending before the Hiroshima High Court. Whatever the final judgment, if Mr. Kimura’s cirrhosis progresses to a cancerous stage, he would then be recognized under the new standard as suffering from an A-bomb disease. “Do they want me to get cancer?” he said, revealing his distress over the dilemma.

Differing opinions concerning the correlation between radiation exposure and hepatitis

A team of researchers, including experts of the Radiation Effects Research Foundation in Hiroshima, compiled a paper suggesting radiation as a possible cause of impaired liver function based on data collected from A-bomb survivors. This paper was used by the plaintiffs as evidence in their lawsuit at the Hiroshima District Court.

On the other hand, a research team of the Ministry of Health, Labor and Welfare submitted a report which denies that a correlation exists between hepatitis C and radiation exposure. Thus, even scientific views are divided. “No matter how much progress science may make,” said Mr. Kimura in a quiet voice, “it’s impossible to clarify all the facts. This is the nature of the A-bomb.”

Researchers agree that some aspects of the health hazards posed by the A-bomb remain unexplained. The ministry’s basic stance is that it will recognize the effects that have been verified to its satisfaction.

The courts and the government, though, have viewed this problem from different perspectives. In May, the Osaka High Court ruled against the government, asserting that as long as the connection between the A-bomb and a particular disease has not been clearly refuted, the disease should be recognized. This disparity between the positions of both sides is a large factor in the difficulty of reaching a comprehensive settlement of the issue involving A-bomb disease certification.

Personal proposal from a researcher

Nanao Kamada, a molecular biologist and chairman of the Board of Directors of the Hiroshima A-Bomb Survivors Relief Foundation, has been studying the aftereffects of the A-bomb since the time he was a researcher at Hiroshima University. Last year, Dr. Kamada joined the ministry’s study panel for its review of the certification standard.

Within the study panel, Dr. Kamada proposed a system whereby each survivor would be provided with an allowance in line with the seriousness of that person’s physical, mental, or social disorder, taking into account the severity of disease, radiation dose, post-traumatic stress disorder (PSTD), and other factors. His idea was intended to address the sense of unfairness in the uniformity of the allowance given to survivors. This proposal, though, was not offered the opportunity for discussion.

“Our discussions were supposed to reflect the real situation involving the survivors, with consideration for what is now clear and yet unclear according to science,” said Dr. Kamada. “If the government maintains the current system, these difficulties will not be resolved.”

The number of applications for certification submitted to the city of Hiroshima and other local bodies has increased dramatically this year. More than 100 people per month contact the head office of the Association to Support A-bomb Lawsuits, located in downtown Hiroshima. Many of those seeking guidance have medical histories or life stories that cannot be fully explained in scientific terms.

Based on the premise that science itself has limits, how should the central government respond to the survivors’ appeals? This question will linger for some time to come.