Spirit of Hiroshima kindled in England through “Peace Song” 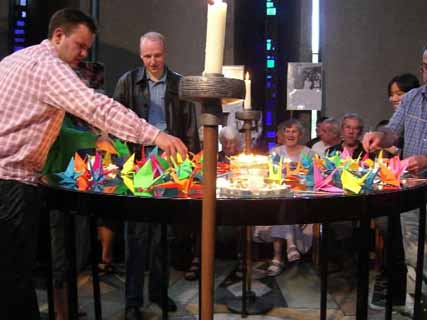 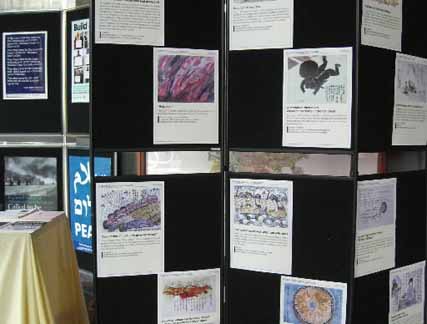 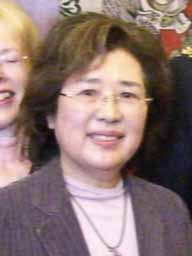 by Keiko Mukai, member of the Hiroshima Coventry Club and chairwoman of the Society for Understanding the World

On August 6, 2008, the 63rd anniversary of the atomic bombing of Hiroshima, there was a gathering in the city of Coventry, central England, to pay tribute to Hiroshima’s A-bomb victims and to issue a call for the abolition of nuclear weapons. Coventry suffered air raids by the German Luftwaffe during World War II. My husband and I participated in this gathering as members of the Hiroshima Coventry Club, a society of people who have ties with Coventry.

The original Coventry Cathedral, located in the city center, was completely destroyed by the bombing except for its outer walls and has become a symbol of peace. The new cathedral, built next to the ruins after the war, has hosted gatherings for Hiroshima and Nagasaki every summer. Regardless of religion or race, people in every walk of life from the Lord Mayor to ordinary citizens participate in these gatherings. This year about 80 people of 20 different nationalities assembled for the occasion.

At the beginning, a peace bell was rung and the participants lit candles. An overview of the damage caused by the bombing was presented, followed by the story of Sadako Sasaki and the paper cranes. Throughout, there was a mood of solemnity and silent reflection.

I sang the “Hiroshima Peace Song” that is always sung during the annual Peace Memorial Ceremony held on August 6 in Hiroshima. As I sang, accompanied by a flute, the song echoed inside the cathedral. I had passed around the lyrics of the song beforehand, and the performance was received favorably, some participants commenting that the song was very moving. It was decided that the song would continue to be sung at the annual gathering and at related events in Coventry. I promised that I would make a recording of the song in Japan and send it to Coventry.

Paper cranes folded by the participants were displayed at the site. We also exhibited 27 drawings by A-bomb survivors, which were provided by Hiroshima Peace Memorial Museum. The drawings will be on display in the cathedral until the end of August.

The Peace Declaration, originally composed for the Hiroshima Peace Memorial Ceremony, was read aloud at the gathering. Councillor Andy Matchet, Lord Mayor of Coventry, responded that he himself wanted to work towards the goal of creating a world free of nuclear weapons. Hearing this comment from the mayor, I felt that ties between Hiroshima and Coventry were becoming even stronger.

The Hiroshima Coventry Club was established two years ago by Hideko Okamoto, who had lived in Coventry for about a year, to promote grassroots activities. We meet to commemorate the anniversary of the air raid on Coventry on November 14 every year, and we have been arranging mutual visits between Hiroshima and Coventry.