Withdrawal of Air Self-Defense Force from Iraq: Examination of support is essential 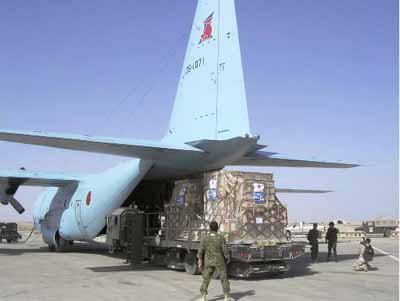 The Air Self-Defense Force unit that is conducting airlifts in Iraq will pull out within the year. Public opinion was divided about its dispatch to Iraq, and a judicial ruling stated that it was unconstitutional. It is only natural for the SDF to pull out. Was the dispatch of the SDF to Iraq appropriate for a peaceful nation? Did it really contribute to the rebuilding of Iraq? These issues must be thoroughly examined.

As a reason for the pull-out, the government has cited the improving security situation in Iraq and the fact that the United Nations resolution that provides the basis for the presence of the multinational force in Iraq will expire at the end of this year. President George W. Bush has announced that the United States plans to cut its forces in Iraq by 8,000 troops, and other nations have also begun pulling their troops out. The decision by the Japanese government is in line with this trend.

The SDF’s airlifts began in 2004 in accordance with the Special Measures Law on Humanitarian and Reconstruction Assistance in Iraq. Initially, forces based in neighboring Kuwait sent supplies to the Ground Self-Defense Force troops stationed in Samawah. Currently, the SDF transports multinational forces, U.N. personnel and supplies to the Baghdad International Airport and other locations.

Although information has been released on the number of airlifts and the amount of supplies transported, very little has been disclosed about the types of supplies being transported and their purpose. For this reason there have been suspicions and criticism that perhaps the SDF is involved in military operations.

In an April verdict the Nagoya High Court ruled that the dispatch of the SDF to Iraq violated Japan’s constitution. The court said that Baghdad was a “war zone” not recognized by the Special Measures Law and air transport of armed soldiers was equivalent to the use of force and thus constituted a violation of Article 9 of the constitution.

In the past the government took a firm stance against joining the multinational forces because of their use of force. However, the administration of former Prime Minister Junichiro Koizumi subsequently went ahead and dispatched the SDF without adequate debate in the Diet. We have to wonder if that wasn’t an unreasonable decision in light of the Japanese Constitution. The true nature of the problem can be seen in the fact that Koizumi was compelled to defend the dispatch of the Ground SDF to Samawah by saying that the area where the SDF would be operating was a non-combat zone.

The regime of Saddam Hussein has fallen, but no weapons of mass destruction, whose presence was asserted by the U.S. and the United Kingdom, were found. It also has been confirmed that there was no connection between Iraq and Al Qaida, the terrorist organization that perpetrated the 2001 terrorist attacks on the U.S. Wasn’t it a mistake to have gone along with U.S. policy on Iraq from the start? The government must offer an explanation that the public can accept.

The U.S. seems to be preparing to shift the focus of its war on terror to Afghanistan. In conjunction with that shift, the government of Japan wants to continue the refueling operations of the Maritime Self-Defense Force in the Indian Ocean. The extension of the Anti-Terrorism Special Measures Law, which expires next January, is strongly opposed by the opposition parties, which hold a majority in the House of Councillors. Komeito, the Liberal Democratic Party’s partner in the coalition government, has taken a cautious stance on taking another vote in the House, so the outlook is unclear.

The extension of the refueling operations will undoubtedly be an issue in the House of Representatives election expected to be held as early as November. The government has stressed that as a member of the international community Japan should continue the mission, but is that the only way Japan can contribute? The government must see that there is further public debate on the issue. In order to do that, first of all it is essential that the government immediately examine the SDF’s operations in Iraq and outline its merits and demerits.