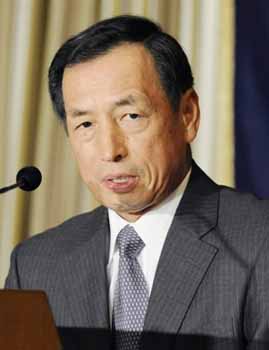 Just showing our intention to obtain nuclear weapons will serve as a strong deterrent. This is what Toshio Tamogami, former Air Defense Force commander, said on December 1, in a question-and-answer session after a speech at the Foreign Correspondents’ Club of Japan in Tokyo. Tamogami was recently ousted from his post after publishing an essay which contradicted the Japanese government’s official view of the nation’s aggression in China and colonial rule of the Korean Peninsula.

Tamogami’s argument is tantamount to calling for Japan to arm itself with nuclear weapons. Such a statement by the top official of the Air Defense Force is not only counterproductive to the national interest of Japan, which experienced the atomic bombings, it undercuts the efforts made by a great number of Japanese citizens, including the A-bomb survivors of Hiroshima and Nagasaki. These survivors, in learning from their tragic experiences, have spent the past 63 years working for the elimination of nuclear weapons. We can never countenance this sort of statement expressed by Tamogami.

The inscription on the Cenotaph for the A-bomb Victims in Hiroshima Peace Memorial Park reads: “Let All the Souls Here Rest in Peace; For We Shall Not Repeat the Evil.” A-bomb survivors, who lost family members, friends, and coworkers, had to rebuild their lives after the war while they themselves were still suffering physically and emotionally. Nevertheless, they have devoted themselves, body and soul, to preventing a third use of a nuclear weapon. They know the souls of the A-bomb victims can only truly rest in peace when all nuclear weapons have been eliminated from the earth.

Among the more than 300,000 people who were exposed to the atomic bomb that day in Hiroshima, 113 members of the Chugoku Shimbun staff--one-third of our work force at the time--were killed in the blast. Ever since, our coverage has maintained a special focus on the atomic bombings and peace, determined that the evil committed during World War II, including Japan’s own aggression in Asia, must not be repeated. Tamogami’s statement, then, was like a slap in the face to us and to our predecessors from the past. His statement made it clear that high-ranking officials of Japan’s Self Defense Force have dangerous views on nuclear weapons. We cannot help but feel frustrated that our voices are not being heard.

Memories of the war and the atomic bombings are fading among the Japanese people and there is uneasiness over threats arising from North Korea’s nuclear weapons program and China’s military buildup. These circumstances may account for the Japanese public’s uncritical acceptance of nuclear deterrence. In this mindset, though, the recognition that the experiences of Hiroshima and Nagasaki have a special meaning in human history, that chronic war can no longer be fought as usual, is ignored.

The idea that the possession of nuclear weapons can prevent war is, on the surface, a rational stand. However, this idea will inevitably lead to an increasing number of nuclear weapon states and fierce competition among them in regard to nuclear development, based on the sort of fear and mistrust that characterized the relationship between the United States and the former Soviet Union during the Cold War. Further development of nuclear weapons will expose more people to radiation and produce more radioactive materials and waste which will need to be tightly controlled for generations. If Japan, the country that experienced the atomic bombings, were to develop and possess nuclear weapons, it would not be able to serve as a moral brake to nuclear weapons development. “Nuclearism” will turn the planet into a “nuclear jungle,” full of nuclear weapon states, and the human race will reel down a road to catastrophe.

Four former high-ranking U.S. officials, including former Secretaries of State George Schultz and Henry Kissinger, advocated the abolition of nuclear weapons in opinion pieces that appeared in the Wall Street Journal in January 2007 and January 2008. These officials, who were responsible for advancing the nuclear arms race during the Cold War, stressed that the reliance on nuclear weapons “is becoming increasingly hazardous and decreasingly effective.” President-elect Barack Obama also takes the nuclear threat seriously and one of his policy goals is the realization of a nuclear-free world.

In an age when non-state terrorist organizations might feasibly obtain small nuclear bombs and nuclear materials, nuclear weapons cannot serve as a deterrent against this form of terrorism. The danger of nuclear war that humanity now faces is of a different order compared to that of the Cold War era. In such a perilous time, the belief that security can be found in possessing nuclear weapons or depending on nuclear powers is plainly an anachronism.

The Japanese government and lawmakers, who are responsible for the civilian control over the military, must seize the initiative in working for the complete abolition of nuclear weapons in cooperation with the cities of Hiroshima and Nagasaki and the A-bomb survivors. Merely submitting a resolution which appeals for the elimination of nuclear weapons at the United Nations General Assembly year after year will not alleviate concerns over Japan’s nuclear capability.

From the standpoint of such dimensions as economics or the environment, the interconnectedness of all people on our planet is clear. Security for the survival of the human race cannot be found in nuclear weapons, which symbolize conventional power politics. The path to genuine human security lies in this connectedness, in efforts toward confidence-building among the nations of the world--including Japan and its Asian neighbors--and creating a world where nuclear weapons are no longer thought necessary.