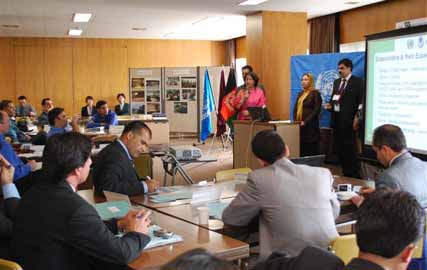 Iraq, Afghanistan, Bosnia and Herzegovina, Rwanda, and Congo are among the countries where war is being waged or, in the aftermath of war, reconstruction is now taking place. Visitors from these areas that have suffered conflict often remark, “For us, Hiroshima is a place of hope.”

After visiting Peace Memorial Museum and other A-bomb-related sites in Hiroshima, these visitors learn the tragic reality of a city that was utterly devastated in an instant. And yet, at the same time, viewing the reconstructed city, a modern city that rose again from the ashes of war, offers them hope for their own recovery. This hope declares that “with the aspiration for peace, once the people are united in working on reconstruction, the resurrection of towns and cities and countries can surely be achieved.”

Hiroshima is known as “a place of hope” not merely due to its material reconstruction. The source of this hope also springs from the citizens themselves, including the A-bomb survivors (hibakusha), who are able to share the suffering that war exacts on human beings caught in areas of conflict.

One hibakusha, reflecting on his experience, has stated with feeling, “Enmity cannot be overcome with more enmity.” An extreme form of violence called “war” fuels enmity, and in turn, this enmity exacerbates violence.

Precisely because the A-bomb survivors experienced the massive devastation wrought by a nuclear weapon, which even laid bare the prospect of humanity’s annihilation, many hibakusha are determined to convey their deep desire for “No more war, no more Hiroshimas” after overcoming their pain and bitterness or hiding these emotions away in their hearts. When visitors touch the spirit of these survivors, they renew their commitment to reject violence and pursue peace.

Hiroshima, then, clearly has both this tangible and intangible impact. And through my own work as a journalist, I have witnessed the impact of Hiroshima a number of times.

One undertaking in this spirit is a project called the Afghanistan Scholarship Project, coordinated by the Hiroshima office of the United Nations Institute for Training and Research (UNITAR). With financial support from the governments of Hiroshima Prefecture and Hiroshima City, the organization has maintained the project since 2003 (with a pause in 2004). The project is conducted for some 20 Afghan leaders in such fields as government, academia, and NGO work over a duration of eight months. For roughly one week at the end of the project, the trainees are invited to Hiroshima for a final training session.

The training in the A-bombed city is carried out with the wish that trainees obtain not only technical expertise, they also acquire a strong determination to abolish nuclear weapons and realize peace in the world as well as bring back “hope” to their own nation. Nassrine Azimi, the director of the Hiroshima office of UNITAR, reports that the project has been proceeding well. “I think the trainees find their visit to Hiroshima a very valuable experience,” she remarked.

Activities of this kind may not produce the immediate results of a quick remedy. However, I believe these quiet, steady efforts are the sort of endeavors that Hiroshima should appreciate and cultivate as invaluable assets of the city.