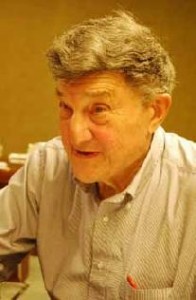 “I’m encouraged when I see these countless origami cranes,” George Levinger, 81, says emphatically. Mr. Levinger is from Massachusetts in the United States. For six months, starting in the fall of 1946, he was attached to the Allied General Headquarters (GHQ) in Tokyo. Inspired by the writing of his own memoirs, he returned to Japan 62 years later and has made his first visit to Hiroshima.

Mr. Levinger learned of the atomic bombing while he was being trained to kill Japanese soldiers and he remembers feeling “relieved” that he did not have to make use of that training. In the 1950s, while teaching at a university, he began taking part in anti-war/anti-nuclear activities. He voiced his opposition to nuclear weapons and participated in demonstrations against the sending of troops to Iraq, “but I was unable to change the United States.” When he visited Hiroshima, though, and spent four hours walking through Peace Memorial Park, Mr. Levinger felt that a half century of wondering if his actions had been “pointless” was wiped away.

“It’s so foolish for Americans to accept a bloated military where people profit from nuclear weapons,” he says. Having cast his own vote for President-elect Obama, George Levinger looks forward to “change” in his country.