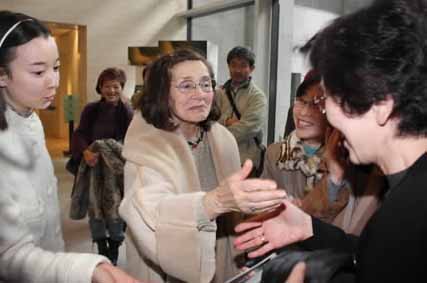 An exhibition of photos taken by the French actress Emmanuelle Riva when she starred in the movie “Hiroshima Mon Amour” has drawn to a close. The film was jointly produced by Japan and France and shot in Hiroshima 50 years ago. The exhibition was held concurrently at three sites in the city, including Hiroshima Prefectural Art Museum, where a panel discussion featuring the actress also took place. The events provided an enriching opportunity to revisit the significance and timelessness of Hiroshima’s experience, the vitality of the city and its people during the reconstruction period, and the power of photographs to convey this time.

The interview with Ms. Riva drew more people than expected, some coming from as far away as Tokyo and Sapporo, a city in the northernmost island of Hokkaido, and about 100 people had to be turned away at the door. The audience enjoyed the friendly talk with the actress as she shared her memories of Hiroshima. But when Ms. Riva explained that there were moments she found so heartbreaking that she was unable to take photos of those scenes, the people in attendance became subdued in silence.

The main message of the movie is that conveying the story of Hiroshima is impossible for those who have not lived it. The line “You didn’t see anything” is a recurrent refrain. Ms. Riva revealed that, just like her role in the movie, she herself wandered through Hiroshima 50 years ago and felt she could never truly communicate the experience of the city. This is precisely what the film was meant to express. The actress also indicated that she has carried within her heart the suffering wrought by the atomic bombing since her first visit to the city.

Among those participating in the panel discussion were Sylvette Baudrot, the script supervisor, an important role in making movies, Dominique Noguez, author and film critic, Marie-Christine de Navacelle, former director of the Institut Franco-Japonais de Tokyo, and Chihiro Minato, professor of Tama Art University. The participants referred to the great influence of “Hiroshima Mon Amour” on film history, including the movement called Nouvelle Vague (New Wave) in the movie industry.

Mr. Noguez commented that the overwhelming power and novelty of this film lies in the fact that Hiroshima and Mon Amour (“My Love”), two things known throughout the world but of an entirely different type, are combined. He commended the originality of the screenplay by Marguerite Duras and director Alain Resnais’s spirit of innovation, saying the movie highlights the state-level atrocity of the atomic bombing through a personal experience, the love nurtured in Hiroshima between a man and a woman.

The photo exhibition drew many residents of the city and they looked at the photos nostalgically, remembering the days of reconstruction. In this regard, the photos served as a means of bringing people together and stirring an opportunity to talk about the days when they were taken. “That’s why you should take photos,” quipped Ms. Riva. The exhibition was indeed a reminder of the power of photographs.

For this reason, there should be a place, such as a media center, where pictures of Hiroshima citizens making efforts to recover from the unprecedented disaster can remind us of those days. By doing so, we can hand down to the next generation what survivors have struggled to convey over the years in order to keep in human memory that which should never be forgotten.