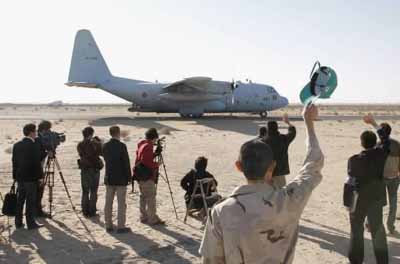 Japan’s Air Self-Defense Force (ASDF), dispatched to Iraq to assist in transporting multinational personnel and supplies, has begun to withdraw from the country. Approximately five years after the first Japanese forces were posted to an “area of combat” in support of the Iraq War--a decision that split public opinion--the mission has come to an end. The pros and cons of the undertaking must now be thoughtfully considered.

In particular, this past spring the Nagoya High Court ruled that the ASDF mission, in transporting armed troops, “violates Article 9 of the Constitution.” Determining whether or not the mission did indeed breach the spirit of the Constitution is a vital task.

The Japanese government is withdrawing the ASDF as the U.N. resolution which provided the basis for stationing multinational forces in Iraq is set to expire at the end of this year. Accordingly, forces from a number of nations have been pulling out one after another.

The dispatch of the Self-Defense Forces began in 2004 with passage of the Iraq Reconstruction Assistance Special Measures Law. At the outset, the Ground Self-Defense Force (GSDF) provided such support as medical assistance and water resources in the southern city of Samawah.

In the beginning, the ASDF had air freighted supplies to the outskirts of Samawah from a base in Kuwait. When the GSDF pulled out in July 2006, however, the ASDF expanded its range of operations to include Baghdad. To date, the ASDF has transported a total of 46,500 multinational troops and U.N. personnel, as well as 673 tons of supplies.

Among some 30,000 multinational troops, many appear to have been armed U.S. troops. Although the Special Measures Law bans the transporting of weapons and ammunition, it seems the cargo is not checked exhaustively for each flight. Thus, a natural question should be posed: What was actually transported?

Until of late, multinational forces have carried out regular “clearing operations” in pursuit of insurgents, resulting in a number of casualties in Baghdad to which the ASDF had brought troops. It is reasonable, then, that the Nagoya High Court would consider this an “area of combat” for which the Special Measures Law does not permit the Self-Defense Forces to be involved in operations. Such a state of affairs led the court to deem the operation unconstitutional.

The Iraq War was instigated by the United States and the United Kingdom, which disregarded the cautious opposition of the international community, including France and Germany. In Japan, then Prime Minister Junichiro Koizumi expressed his support for the decision to go to war.

However, the claim that Iraq possessed weapons of mass destruction, which served as the grounds for this war, has proven to be erroneous. Moreover, no link was found between Iraq and Al-Qaeda, the international terrorist network that masterminded the terrorist attacks of September 11, 2001.

President Bush himself has acknowledged that this flawed information is the source of his greatest regret while in office. Still, the Japanese government has not wavered from its position that supporting the war was the “right decision at that time.” And the government’s contention that the decision was made on its own initiative does not ring true.

This is not a matter merely of the past. President-elect Barack Obama has voiced his intention to pivot the U.S. war on terror toward Afghanistan. In this undertaking, Mr. Obama may ask Japan for further cooperation, such as dispatching the Self-Defense Forces on Afghan land, in addition to the refueling mission that the Maritime SDF as already been conducting in the Indian Ocean.

What sort of non-military contributions could Japan make on the international stage? Even if Japan is not involved in combat-related operations, the nation can still make valuable contributions by utilizing its technology and personnel in the fields of education, medical care, and infrastructure building. The national debate must be deepened to arrive at measures which are not simply temporary stopgaps.