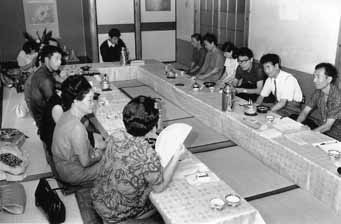 After thumbing through her favorite movie magazine, she began to throw a tantrum. Her father, Kunizo Hatanaka, understood why she was grumpy, and said, “I’ll get you the next issue when it comes out.” The daughter calmed down and sat on the couch.

The daughter, Yuriko, was born with microcephaly caused by prenatal exposure to radiation from the atomic bombing. She needs help eating and changing her clothes. Her mother, Yoshie, died 30 years ago, praying not to leave her daughter behind. And last month Kunizo passed away at the age of 92. Both Yoshie and Kunizo worried about Yuriko until their last breaths of life.

About 15 years ago, I visited Kunizo and Yuriko several times at their small house in Iwakuni, Yamaguchi Prefecture, with some journalists from other places in Asia. Kunizo ran a barbershop and was active in communicating the horror of the atomic bombing. “Why must the future be taken away from babies in their mothers’ wombs?” he said, perhaps speaking for Yuriko who is incapable of speech.

Kunizo formed the Mushroom Club with other families with children suffering from microcephaly and he served as the group’s first chairperson. More than two decades passed before they, with the help of their supporters, were able to persuade the government to recognize microcephaly as an A-bomb disease.

Yuriko is now 62 years old and lives were her younger sister. There are 22 officially certified microcephalic patients in Japan and an increasing number of them live on their own. How can they continue to be supported, as Kunizo Hatanaka would have wanted?

Microcephaly
When a woman is exposed to a high dose of radiation in the early stage of pregnancy, the baby can develop severe microcephaly along with mental disabilities and abnormalities in internal organs. This was the case involving close-range exposure to the atomic bomb. In 1967, the former Ministry of Health and Welfare recognized the patients’ symptoms as “short-distance early prenatal exposure syndrome” caused by radiation from the atomic bomb.

The Mushroom Club
The Mushroom Club was established in 1965 by families with microcephalic children, responding to a call by members of the Hiroshima Study Group (a group that researched the consequences of the atomic bombing on the city and its people), which included the late author Tomoe Yamashiro. The club was composed of six families at its inception and, at its largest, had 22 families. The club’s founding goals involved designating microcephaly as an official A-bomb disease, gaining life-long security for the patients and their parents, and realizing the complete abolition of nuclear weapons. There are currently 18 families in the Mushroom Club.