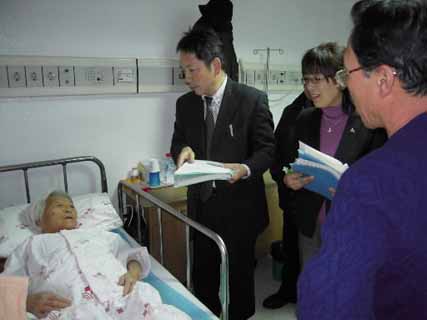 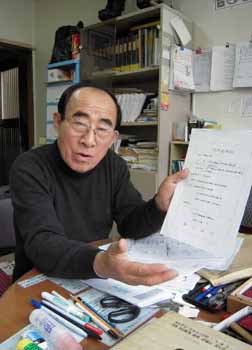 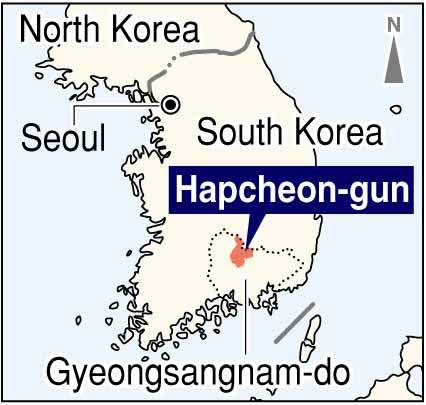 In the wake of the revised Atomic Bomb Survivors Relief Law, which took effect on December 15, 2008, two officials from the City of Hiroshima visited South Korea from January 15~20. The revision of the law now enables A-bomb survivors (hibakusha) to apply for the Atomic Bomb Survivor’s Certificate while residing abroad. The visit by Hiroshima City officials was the first time that Japanese officials have traveled overseas to interview applicants in person.

In accompanying the officials to South Korea, I was able to see the reality of life for hibakusha in a country where relief measures for A-bomb survivors have only now started to materialize as a result of the law’s revision. At the same time, I have come to grasp new challenges ahead, such as the gap that still exists in available relief measures between hibakusha living in Japan and those living overseas and the role that local governments play in connection with this revision.

On January 16, the first day interviews were held, Akimi Nakamura, director of the Qualification Division of the Atomic Bomb Survivors Relief Department of Hiroshima City Office, and Shigeru Aratani, assistant director of the division, arrived at Hapcheon Goryeo Hospital in Hapcheon-gun, Gyeongsangnam-do, after a two-hour drive from Busan City. Through their interviews, they came to understand the harsh reality which hibakusha in South Korea have endured.

Cheong Nam Su, 88, is confined to a hospital bed and has been cared for by her eldest son. Ms. Cheong was exposed to the atomic bombing while at home, 2.4 kilometers from the hypocenter. She filed a lawsuit against the Nagasaki Prefectural government, which had denied her application for the Atomic Bomb Survivor’s Certificate on the grounds that she was not able to travel to Japan to submit the materials in person. Ms. Cheong won her claim at the Nagasaki District Court, but the Nagasaki Prefectural government appealed this ruling and the case is now being contested at a higher court.

Ms. Cheong has been bedridden for the past six years and is virtually unable to communicate. Mr. Nakamura checked such information as the circumstances of her exposure to the atomic bombing based on written documents. The interview was brief, lasting less than 10 minutes, but she coughed throughout it and appeared to be in pain.

The Hiroshima City officials interviewed a total of six male and female applicants between the ages of 67 and 99. Four of these applicants were gravely ill and had difficulty communicating.

All six have already obtained the Atomic Bomb Certificate of Acknowledgement issued by Hiroshima City or other local governments, which could, even before the revised law came into effect, be converted to the Atomic Bomb Survivor’s Certificate if they traveled to Japan. Instead, mainly due to their deteriorating health, they applied for the certificate by proxy. In this case, under regulations set by the Ministry of Health, Labor and Welfare, they must undergo an interview in their country of residence to verify their identity and background. This process of confirming the details of their exposure to the atomic bombing in person is the same as with new applicants.

The Atomic Bomb Survivor’s Certificate is a virtual “passport” for A-bomb survivors to access such relief measures as allowances and medical benefits. After the revision of the Atomic Bomb Survivors Relief Law, hibakusha living abroad can apply for the certificate at Japanese embassies or consulates in the country where they reside. The revision is thus a significant change in the relief law in that hibakusha can now apply from overseas.

On the other hand, a gap in support between A-bomb survivors in Japan and those in other countries still remains. Hibakusha overseas are still constrained by a ceiling on costs for their medical care and must seek reimbursement after they make payment. Furthermore, when applying for A-Bomb Disease Certification, which enables receipt of the Medical Special Allowance, applicants are required to travel to Japan, just as they were before the revision of the law.

Many A-bomb survivors and their families in South Korea share the feeling that “It is now too late to obtain the Atomic Bomb Survivor’s Certificate.”

The officials interviewed Jo Gi Seon, 83, who is confined to a hospital bed at Busan Central Hospital in Busan City. Ms. Jo begged Mr. Nakamura, “Please stop the pain in my legs.” Her eldest son, Kang Gab Il, 64, pointed out, “If the certificate had been issued earlier, my mother could have received treatment when she had only mild symptoms.”

The trip to South Korea revealed burdens shouldered by the local Japanese governments which are involved in conducting the screening procedure overseas. Application forms are sent, via the Ministry of Foreign Affairs, to the four local governments in Hiroshima Prefecture, Hiroshima City, Nagasaki Prefecture, and Nagasaki City, where survivors encountered the atomic bombings. Although the central Japanese government is accountable for relief measures for hibakusha, the four local governments carry out the screening procedure overseas on its behalf. Travel expenses are covered by the central government, but many challenges remain, such as selecting the officials who will travel overseas and devising interviews which won’t impose burdens on the hibakusha.

Even though the screening procedure overseas was conducted in neighboring South Korea, which is relatively easy to travel to, the officials were still obliged to cover a wide swath of the country, including Seoul and Busan, in a limited amount of time. The Ministry of Foreign Affairs reports that 22 applications from abroad have been received, as of January 22, at the Japanese embassies and consulates in three nations. (Twenty from South Korea and one each from the United States and Brazil.) No matter how far away the applicants reside, Japanese officials will now have to visit them in person.

Back in Japan, Mr. Nakamura stressed, “The people we interviewed already possess the Atomic Bomb Certificate of Acknowledgement and the circumstances of their exposure to the atomic bombing have been confirmed. Still, we weren’t able to hand them the Atomic Bomb Survivor’s Certificate. I find this very regrettable. The government’s approach must not make the survivors wait any longer than absolutely necessary.” The Hiroshima City government, along with the three other local governments, will continue to consult with the Welfare Ministry for more flexible handling of the screening procedure. On the agenda for discussion is the idea of omitting interviews with applicants who already possess the Atomic Bomb Certificate of Acknowledgement despite choosing to apply by proxy.

In regard to relief measures, A-bomb survivors overseas have been neglected on the grounds that “they are unable to travel to Japan.” With the revision of the Atomic Bomb Survivors Relief Law, local governments can contact the reality experienced by hibakusha living overseas. More than ever, the local governments shoulder the important duty of urging the central government to solve the remaining challenges of this system as promptly as possible.

The revision of the Atomic Bomb Survivors Relief Law has not resolved all the difficulties over issuing the Atomic Bomb Survivor’s Certificate for hibakusha living overseas. A-bomb survivors’ organizations abroad are wrestling with significant concerns. The most worrisome involves survivors who still must provide proof of having experienced the atomic bombing. Under the law, witnesses are, in principle, required to file an application. Over 63 years have passed since the bombings, though, so a number of people are stymied in their search for witnesses.

“After neglecting them for so many years, it is heartless asking applicants overseas to abide by the same condition set decades ago,” stressed Ho Man Jeong, 75, head of the Busan Chapter of the South Korean Atomic Bomb Sufferers Association.

The chapter comprises roughly 630 members. Among them, about 30 members have not obtained the Atomic Bomb Survivor’s Certificate. Mr. Ho has been providing dedicated support to these members, offering such assistance as collecting materials which can prove their experience of the atomic bombing and translating application forms into Japanese. However, some seeking the certification have grown old and now suffer from dementia or they have no memory of the bombing because they were only small children at the time and both parents have passed away.

Another thorny case involves a woman who suffered prenatal exposure to radiation, but her parents did not register her birth at Hiroshima City Hall in the chaotic aftermath of the bombing. The family then returned to South Korea so the woman is unable to prove her status as a hibakusha. The official family registry suggests that she was born in South Korea. With the support of Mr. Ho, she is now seeking to have a court in Busan confirm her birth in Japan.

Based on hearings held by A-bomb survivors’ organizations overseas, the four local governments estimate at least 155 people in North America, South America, and South Korea are intending to apply for the Atomic Bomb Survivor’s Certificate without already being in possession of the Atomic Bomb Certificate of Acknowledgement.

“The Japanese government has implemented minor relief measures whenever they lost a lawsuit,” said Mr. Ho. “But in the process, a number of people have passed away. And as the years go by, even those still alive are finding it hard to prove that they experienced the atomic bombing. Reclaiming the rights they are entitled to, but have been deprived of, has become an arduous task.” For humanitarian reasons, Mr. Ho calls for easing the screening requirements involving applications from members of his chapter, whose experiences of the atomic bombings have already been confirmed by the chapter itself.