Interview with Takashi Morita, chairman of the Peace Association of Brazilian A-bomb Survivors 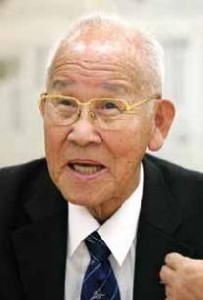 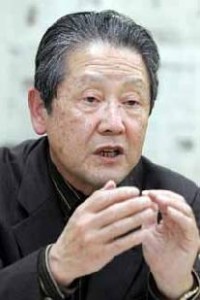 An atomic bomb survivor living in South Korea once said, “If you liken the A-bomb survivors to a river, the headwaters are Hiroshima and Nagasaki, but those who have drifted from there to South Korea, America, and Brazil are A-bomb survivors all the same.” Sharing that feeling, Takashi Morita, 84, who has lived in Brazil for 52 years, has devoted his energy for the past 25 of those years to efforts to support survivors. The Chugoku Shimbun interviewed Morita after he returned to Japan at the end of a four-month round-the-world voyage sponsored by Peace Boat, a Tokyo-based non-governmental organization, which invited 103 A-bomb survivors from Hiroshima and Nagasaki to travel at no cost. After departing from Yokohama last September, the ship called at 20 countries on five continents where the survivors met with local citizens and talked about their experiences. The ship returned to Japan on January 13.

You spent 129 days traveling the world on Peace Boat.
Yes, and we found that many people still didn’t know the facts of the atomic bombings. In Vietnam, the first country we visited, we met with the children and grandchildren of victims of Agent Orange. I think the impact of Agent Orange on the second and third generations may be even greater than that of the atomic bomb in some cases. I was inspired by the fact that they are not shy about exposing their disabilities to the public while raising their voices in protest.

Why did you decide to change the name now?
We used to have 242 members, but now we can only reach 124. They are spread out all over Brazil. We wanted to change from an organization for A-bomb survivors only to one that includes ordinary citizens and young people.

What problems do the A-bomb survivors in Brazil face?
They are growing old, so even filling out the paperwork to apply for assistance with medical care every year is difficult for them. Brazil is a big country, and traveling to Sao Paolo to get a certificate of residence is not easy either. Even if children or grandchildren help fill out the application for those who can’t do it themselves, there are sometimes things they don’t know. If some of the paperwork is not submitted, aid will be cut off.

What prompted you to move to Brazil?
I was still struggling in Hiroshima 10 years after the end of the war, and my family had one bad break after another. If I was out in the sun in August my white blood cell count would become abnormally high, and I’d get chills. A friend who had come back from Brazil suggested I immigrate there. He said living on a plateau like the one where Sao Paolo is would be good for my health. It was a painful decision that I made in the days when there was no aid for the A-bomb survivors.

How was life overseas?
It was tough. We moved 10 times in the first two years. We were supposed to be agricultural immigrants, but because of the aftereffects of the atomic bombing I couldn’t tolerate the labor, so I put my clock-repairing skills to use at a factory and later opened my own clock shop. I couldn’t speak Portuguese and had no friends and no money. And I couldn’t tell people I was an A-bomb survivor as it could have hurt my children’s chances at marriage.

Your organization of A-bomb survivors was formed in 1984.
The year before that, a Japanese-Brazilian doctor who had undergone training in Hiroshima examined the survivors. None of them was found to have any health problems. Those who said they felt weak were told they were just malingerers. Then in 1984 the local Japanese-language newspaper carried an article saying that A-bomb survivors could apply for pensions in Japan. The report was incorrect, but it made people realize that they had rights. Our children married and we were financially stable, so my wife and I called on others to join us in forming an organization.

Did things go smoothly after that?
Nearly every year I came back to Japan at my own expense and went to offices of the national government as well as the cities and prefectures of Hiroshima and Nagasaki asking for the same support for the A-bomb survivors in Brazil that the survivors in Japan were getting. But it was slow going. In terms of medical care, issuance of the Atomic Bomb Survivor’s Certificate, and payment of Health Management Allowances, there was no improvement until we began winning lawsuits.

What about the cooperation between A-bomb survivors living overseas?
The survivors from North and South America who were invited to the ceremony marking the 45th anniversary of the bombing in 1990 stayed together in Hiroshima and talked with each other. That led to a broadening of the movement as South Koreans and the Japan Confederation of A- and H-Bomb Sufferers Organizations joined hands with the North and South Americans. As we continued to work together, we realized we had no choice but to go to court.

I was the first one from Brazil to file a lawsuit against the Japanese government. Some of my friends told me not to sue. The association of residents from Hiroshima Prefecture was also dead set against it. It took a lot of nerve to take on the government of our homeland. I had a heart attack and lost my voice, but we won our lawsuits one after another and gained our rights, although the Relief Law is still not applied across the board.

Is there something you would like to convey to young people?
All of our struggles are the result of war. I would like young people to study modern Japanese history and ensure that Japan will never start a war again.

Takashi Morita
Born in 1924 in Sagotani Village, what is now part of Saeki Ward, Hiroshima City. Began working in the clock business at the age of 13. Drafted in 1944. Became a member of the Kempeitai military police and was assigned to Hiroshima on August 1, 1945. On the morning of August 6, while on his way to build bomb shelters on the side of Koiyama Hill 1.3 km from the hypocenter, he was exposed to the flash of the atomic bomb and blown off his feet by the blast. Although his back was badly burned, he was ordered by a superior officer to check out the situation and walked through the ruins of the burned-out city. At the west end of the Aioi Bridge he encountered Prince Lee-Woo of Korea, staff officer in charge of education, and carried him to Ujina Port.

The following is a summary of remarks by Keisaburo Toyonaga, 72, director of the Hiroshima branch of the Association of Citizens for the Support of South Korean Atomic Bomb Victims:

There are history-related differences in the positions of the A-bomb survivors living overseas.

In conjunction with Japan’s invasion and occupation of the Korean peninsula, China, and other Asian countries, workers were forcibly brought to Japan. Those who were exposed to the atomic bomb have petitioned the Japanese government for an apology and compensation.

There are also A-bomb survivors living in other countries for various reasons. Some remain Japanese citizens while others have naturalized, but they’re all originally Japanese.

The government has continued to treat the survivors living overseas differently from those living in Japan. Why?

One point to consider in that regard is the nature of the Atomic Bomb Survivors Relief Law. If the law was enacted with the idea of providing assistance for the socially vulnerable, then it should only apply to those who pay taxes in Japan. On the other hand, if you consider support for the survivors based on the fact that the atomic bombs were dropped as the result of a war that Japan started, assistance must be provided as a form of national redress no matter what country the survivors live in.

As for the first point, in 1974 the Health and Welfare Ministry issued Directive No. 402, the Implementation of the Act for Partial Revision to the Act on Medical Care for Atomic Bomb Survivors and the Act on Special Measures for Atomic Bomb Survivors. Under the directive, the certificates of survivors living overseas who obtained their certificates in Japan were valid as long as they were in Japan, but as soon as they left the country their certificates became invalid and they could no longer receive the Health Management Allowance.

In the 1990s the movement spread as groups in South Korea, North America and South America as well as the Japan Confederation of A- and H-Bomb Sufferers Organizations became involved, and the court battle has gradually gained ground. This cooperation must be further promoted to achieve across-the-board application of the Atomic Bomb Survivors Relief Law.


Takashi Morita, chairman of the Peace Association of Brazilian A-bomb Survivors ">Click here to comment on this article.