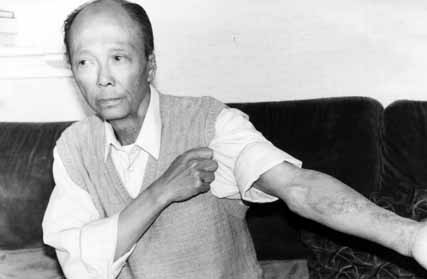 Atomic bombs are weapons of indiscriminate killing, which slaughter friend and foe alike, regardless of their nationality, religion, race, age, or gender. At least 12 American prisoners of war, many the crew members of downed planes, were among the victims of the atomic bombing of Hiroshima. In Nagasaki, a large number of non-Japanese, including Dutch POWs who were captured in Indonesia, were exposed to the A-bomb while engaged in forced labor. But the public’s awareness of survivors from nations like the Netherlands has been relatively low compared to those from other countries outside Japan.

Through the examination of documents from the Ministry of Health, Labor and Welfare and the Nagasaki city government, it has been established that 170 POWs were exposed to the atomic bombs. Of the 170, 130 were Dutch, 24 Australian, and 16 British. Eight Dutch POWs were killed.

In 1989, exactly 20 years ago, I visited the Dutch survivors in the Netherlands. I still vividly recollect my meeting with one, Otto Van Den Berg.

Mr. Van Den Berg was 66 then and residing quietly in Eijsden, a small village of 1,000 residents near the border with Belgium. He was retired and living in a small house. Of Indonesian ancestry, his features were similar to those of someone Japanese. Keloid scars on his face, neck, and left arm were mute reminders of the bombing.

“I have never felt any joy in life. My life has been full of bitter experiences for the past 44 years,” said the diminutive man as if spitting out the bad memories from his body.

Mr. Van Den Berg was born to an Indonesian-Dutch father and Indonesian mother as the eldest son of their four children. He was drafted at the age of 18 and held as a POW by the Japanese army when it invaded Indonesia in March 1942. He was transferred from one prison camp to another and eventually, in April 1943, arrived at the Japanese port of Moji in northern Kyushu on the ship Hawaii Maru, along with 700 other POWs. Some 300 of these, including Mr. Van Den Berg, were detained at the Fukuoka No. 14 Branch Camp in Nagasaki, and the remaining prisoners were sent to other camps which had coal mines or other work sites.

Hard labor at Mitsubishi Nagasaki Shipyard and malnutrition affected Mr. Van Den Berg’s health and he developed pneumonia six months later. Some died from illness and others were transferred to different camps.

On August 9, 1945, while working outdoors, he was exposed to the atomic bomb about 1.7 kilometers from the hypocenter. After being blown off his feet by the blast, he lost consciousness. The heat rays had burned the left side of body. When he came to, he jumped into a nearby river then fled into the mountains bounding Nagasaki.

He received emergency care at a relief station in the mountains. Two months later, an American ship brought him back to Indonesia. He continued receiving treatment on the island of Borneo, even during a civil war there. His chin became stuck to the skin on his neck, preventing him from turning his head, and he could not straighten out his left arm.

In July 1947, Mr. Van Den Berg moved to the Netherlands for further treatment. Two years later he finally underwent his first plastic surgery at an army hospital. Meanwhile, he was taunted by the white people of his own country. Children and adults jeered at him and told him that he didn’t belong there.

After seven operations over three years, he could finally move his neck and left arm. He worked as an electrician and retired in 1980. He never married. He told me he was worried about his health, including the cataracts developing in his eyes.

However, just like many survivors outside Japan, Mr. Van Den Berg was not granted even the minimum support of a medical allowance, which those living in Japan were provided. Without sufficient access to information, he had no way of finding out about the Atomic Bomb Survivor’s Certificate.

As a result of the efforts over many years by survivors living in South Korea, Brazil, and the United States, a revision to the Atomic Bomb Survivors Relief Law took effect in December 2008, enabling the acquisition of the certificate without visiting Japan if the person is proven eligible. Though some problems remain, such as the burdensome procedure, this revision was a significant advance.

There are currently about 75 A-bomb survivors in the Netherlands. They have been forced to endure a lack of support for much too long. At this point, no time should be wasted in applying the same relief law that covers Japanese survivors to those suffering without assistance elsewhere in the world. This includes the countries of the Netherlands, Australia, the United Kingdom, and North Korea, even though Japan has no diplomatic relations with this nation. It is never too late to demonstrate Japan’s good faith.