Hiroshima and the World: The Lesson of Hiroshima 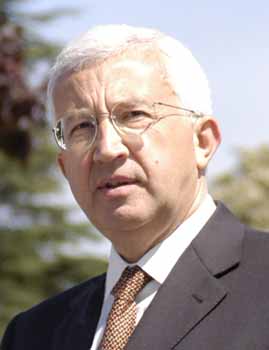 Alexander Likhotal
Professor Likhotal is the President and CEO of Green Cross International, Geneva. He holds doctorates in Political Science from Moscow State Institute for International Relations (1975) and in History from the Institute of World Economy and International Relations, USSR Academy of Sciences (1987). In addition to an academic career, he served as a European Security analyst for the Soviet Union leadership. In 1991, he was appointed Deputy Spokesman and Advisor to the President of the USSR, Mikhail Gorbachev. After Mr. Gorbachev’s resignation, Professor Likhotal served as his advisor and spokesman and worked at the Gorbachev Foundation. As President of Green Cross International, he is actively involved in furthering sustainable development principles. He was born in Moscow in 1950.

The Lesson of Hiroshima

Few events cut the fabric of history into “before” and “after.” Hiroshima is one of them. Indeed, as Victor Frankl, the Austrian psychiatrist and concentration camp survivor, wrote: “Since Auschwitz we know what man is capable of. And since Hiroshima we know what is at stake.” However, the formal recognition of this dramatic historical status came, as often in history, belatedly. It was only in 1985 that President Gorbachev and President Reagan stated at the Geneva summit: “A nuclear war cannot be won and must never be fought”--adopting, in effect, a declaration of the need to rid humankind of nuclear weapons.

Today, the goal of a nuclear-weapons-free world has an even greater urgency. In a world of new threats and challenges, nuclear weapons do not solve real security problems; indeed, reliance on them is becoming increasingly dangerous. Whatever technical measures are taken to prevent nuclear weapons from falling into the hands of terrorists or rogue elements and to prevent an accidental or inadvertent break-out of nuclear war, such a possibility will be present so long as nuclear weapons continue to exist.

However, sixty years after Hiroshima and two decades after the end of the Cold War, the world is still burdened with vast arsenals of nuclear weapons, of which even a fraction would be enough to destroy civilization.

There are still some 20,000 to 30,000 nuclear weapons in the world. The US and Russia have over 95 percent of these weapons with many still on hair-trigger alert, ready to be fired at a moments notice. In all, nine countries are believed to have nuclear weapons: the US, Russia, UK, France, China, Israel, India, Pakistan and North Korea. Japan is a virtual nuclear weapons state, having both the plutonium and the technology to become a major nuclear power in a matter of weeks. There is also great concern that Iran is on its way to also becoming a nuclear weapons state.

Unfortunately, the process of reducing the nuclear arms of the United States and Russia has stalled; the negotiations on these issues are virtually frozen. The Strategic Arms Reduction Treaty (START I) between the United States and Russia is set to expire in December 2009. Negotiations to renew or replace the treaty have stalled because of a disagreement between the two parties on whether a new treaty should include limits on long-range missiles and bombers.

Russia favors including such limitations, while the US wants a new treaty to cover only warheads. The Bush administration has favored a more limited treaty in order to allow development of long-range missiles that could carry non-nuclear warheads as part of its “global strike” plan. If the START treaty is allowed to expire without a sufficient replacement, there will be no way to monitor progress towards the Moscow Treaty agreement signed in 2002, which calls for both sides to reduce their active strategic stockpile to 1,700-2,200 warheads by 2012.

In addition, the Comprehensive Test Ban Treaty (CTBT) has not been ratified by all nuclear powers. The goal of the eventual elimination of nuclear weapons has been essentially forgotten. What is more, the military doctrines of major powers, first the United States and then Russia, have re-emphasized nuclear weapons as an acceptable means of fighting a war, to be used in a first or even in a “pre-emptive” strike.

If the US and Russia continue their current nuclear policy, over time, substantial proliferation of nuclear weapons will almost surely follow. Some, or all, of such nations as Egypt, Japan, Saudi Arabia, Syria, and Taiwan will very likely initiate nuclear weapons programs, increasing both the risk of the use of the weapons and the diversion of weapons and fissile materials into the hands of rogue states or terrorists. Diplomats and intelligence agencies believe Osama bin Laden has made several attempts to acquire nuclear weapons or fissile materials.

According to recent security assessments, the probability of a major terrorist act involving the use of a WMD is 16% over the next 5 years and 29% over 10 years. This level of danger proves amply that the current nuclear weapons postures are immoral, illegal, militarily inefficient, and unacceptably dangerous.

Over the past 15 years, the goal of the elimination of nuclear weapons has been so much on the back burner that it will take a true political breakthrough and a major intellectual effort to achieve success in this endeavor. This goal will prove to be a challenge to the new generation of leaders, a test of their maturity and ability to deliver. Furthermore, given that the current financial and economic crisis seems to have marginalized all other issues on the international agenda, reaching this goal becomes more like “mission impossible.”

In this regard President Obama’s statements on nuclear issues provide great cause for optimism for the entire world. For the first time since Presidents Reagan and Gorbachev’s Geneva and Reykjavik Summits in 1985-1986 the vision of a world free of nuclear weapons has been rekindled as a practical policy goal. As just reported by the Times of London, President Obama intends to convene the most ambitious arms reduction talks with Russia for a generation, aiming to slash each country’s stockpile of nuclear weapons by 80 percent.

However, taking into account the US bipartisan foreign policy traditions as well as various institutional limitations, such as extremely complicated foreign policy coordination mechanisms, overcoming the distance between intentions and political implementation could be a long journey. Former Secretary of State Henry Kissinger once pointed out that “one of the most unsettling things for foreigners is the impression that our foreign policy can be changed by any new president on the basis of the president’s personal preference.”

Responding to the needs of global cooperation for enhancing non-proliferation and the abolition of weapons of mass destruction, Green Cross International, to which I belong, contributes to the safe and environmentally sound elimination of chemical weapons in Russia and the United States, having played a major role in the elimination of over 25,000 tons of these weapons in the two countries combined in 12 years. The program also aims to stimulate decision makers to effectively deal with the proliferation challenges posed by weapons of mass destruction worldwide as well as facilitate nonproliferation and disarmament at the international level.

It is clear there are no quick-fix solutions and the abolition of all nuclear weapons could only be achieved gradually and through worldwide cooperation. Serious efforts by the United States and Russia toward a nuclear-weapons-free world would open the way to reach an agreement on adequate behavior with all other nuclear-weapon states. START extension is the most urgent item on the agenda for Washington and Moscow, while a general non-first-use treaty between the nuclear-weapon states would greatly reduce the risk of an accidental nuclear launch. It would also signal to the world that nuclear states are taking steps to end their reliance on nuclear weapons. The Nuclear Non-Proliferation Treaty (NPT) that is currently under severe stress must be greatly reinforced and the US should ratify the Comprehensive Nuclear Test Ban Treaty if its new leadership really means what it says.

The leaders of the world should be guiding us to link the moral imperative--the rejection of such weapons from an ethical standpoint--with the imperative of assuring security. It is critical that the leaders have the vision as well as the courage to take the difficult but necessary decisions to make Hiroshima a painful but learnt lesson.