Interview with Dr. Lown, author of “Prescription for Survival” 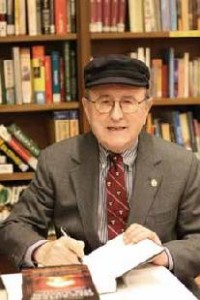 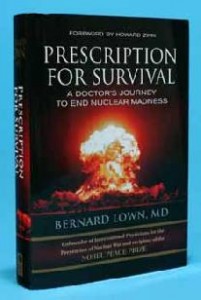 Dr. Bernard Lown, the renowned cardiologist and co-founder of the International Physicians for the Prevention of Nuclear War (IPPNW), recipient of the Nobel Peace Prize in 1985, has recently published a memoir of his many years as an international figure in the antinuclear movement. Entitled Prescription for Survival: A Doctor’s Journey to End Nuclear Madness, it tells the compelling story of Dr. Lown’s struggle to warn the world of nuclear danger since the early stage of the Cold War era. The Chugoku Shimbun spoke with Dr. Lown, via email, about his new book.

What is the central message, or messages, you’d like the world to take away from your new book Prescription for Survival?
The singular message the book conveys is that ordinary people forge their own destiny. History books teach the major actors to be monarchs, dictators, presidents, military leaders with wisdom or folly to engage in great deeds or to commit heinous crimes. They are the only ones who shape history. On the contrary, as the rich experience of the International Physicians for the Prevention of Nuclear War (IPPNW) makes clear, it is we the people who are the major actors. When this lesson is forgotten, democratic institutions atrophy and wilt. The Obama phenomenon is a significant reminder of the power of people to make new and substantial things happen.

How does the nuclear peril today compare with the danger of the Cold War?
The nuclear peril today, though serious, is of a lesser order of magnitude than during the decades of confrontation between the two superpowers. During the Cold War the question was when will it happen. And if it happened would life be sustainable on Planet Earth. Dominant strategic thinking then was shaped by deterrence theory, defined by the concept of Mutual Assured Destruction. The perversity of this view was exposed by its acronym, MAD. Today the world is not threatened with sudden extinction. Yet, subterranean proliferation, indifference of nuclear powers to their obligations under the Nuclear Non-Proliferation Treaty (NPT), the increasing stockpiles of radioactive material the world over, and the growth of terrorism invites justified anxiety and dread.

What lessons did you learn through the many challenges you experienced involving the IPPNW?
Among many lessons one stands out. To mobilize people for a long enduring struggle, it is not enough to persuade them about the rightness of the cause or the likelihood of success, The moral dimension of the struggle must be continuously affirmed. Engendering outrage against injustice is a vital force not only for setting people in motion but for keeping them active. To quote from the book: “I never believed that mere knowledge was enough to incite anger. The most detailed, excruciating account of the horror of nuclear war would not, by itself, ignite public engagement. People needed to have their moral viscera wrung. They needed to grow outraged that some political hack was willing to incinerate and irradiate their children and the only world we have. Intellectuals tend to feel that such arousal is too emotional, too propagandistic, too…well, nonintellectual. Nonsense! Human beings are complex amalgams of mind, emotion, spirit, and a deeply embedded morality. We needed to excite the entire neural network.”

You call human beings “an endangered species” yet you seem to be able to maintain “a sense of hard-headed optimism.” How optimistic do you feel today about the eventual abolition of nuclear weapons from the world and the long-term survival of our species?
More than ever I feel optimistic about the inevitable abolition of nuclear weapons, though well aware that I will not live to see this happy advance for humankind. My opinion is not based on wishful thinking. Lending support to my optimism is the fact that some American architects of the Cold War, such as former Secretaries of State Kissinger and Schultz and others, have become active campaigners for nuclear abolition. They have come to realize that nuclear weapons threaten the well being of technologically advanced societies. Nuclear terrorists, ready to die for their cause, cannot be deterred. In short, the age of deterrence is at an end. The inevitable conclusion is that nuclear abolition is the only way to contain this awesome threat.

What are your hopes and concerns regarding the new Obama administration and nuclear weapons?
Obama is the first president since Reagan who supports the need to eliminate nuclear weapons. The awful truth, though, is that the U.S. military industrial complex, identified as such by President Eisenhower fifty years ago, is more powerful than ever. The Pentagon and its numerous allies, in every sphere of American life, will not tolerate nuclear disarmament. If President Obama were to do battle on this issue, he would lose. Wherein my former voiced optimism? To succeed in this historic quest requires a combination of a huge grassroots movement and a commitment to the cause of nuclear abolition in the White House. The two could accomplish this long overdue goal. The experience with the doctors’ movement provides a historical template in the ongoing struggle for a world free of genocidal weapons.

What role should Hiroshima/Nagasaki and Japan play in abolishing nuclear weapons from the world?
For an antinuclear movement to be effective, it must be worldwide in scope. Herein, the indispensable historical importance of Hiroshima/Nagasaki. Their tragic experience must be revitalized as living memory not vague remembrance. Post WWII generations are unaware what had transpired. Japanese people have a noble duty to be in the forefront of this epic struggle.

The average world citizen often feels helpless to do anything about the nuclear dilemma. What can the ordinary person do to help abolish nuclear weapons?
I have already dealt with this point in the larger frame. One needs to consider how the planet has been humanized over the centuries. Cannibalism, burning of witches, corporeal punishment of children, imprisonment of the mentally ill, women deprived of human rights, blatant racism, homophobia, capital punishment, on and on, by and large are deemed unacceptable in a civilized society. My optimism is driven also by my experience as a doctor. Since my birth, life expectancy has been prolonged by nearly a third! Cardiovascular disease is now largely preventable. There are medical miracles galore. All these have been achieved by ordinary people working in concert for shared humanitarian goals. Yet it is clear that the power of science has not been fully exploited to make life more livable for the majority of mankind. But the theoretical framework and the legal underpinning are already in place for a new world order. It is embodied in the International Declaration of Human Rights adopted in San Francisco 60 years ago.

You have written such a rich and detailed book that covers many years of your life. What was the experience of writing the book like for you?
Writing “Prescription for Survival” was one of the most arduous and challenging undertakings of my life. I worked unremittingly for three years, seven days a week. I realized that the process of remembering and putting down the experience on paper educated me to a host of happenings that I had previously not understood. Most importantly, it buoyed my sense of optimism.

Bernard Lown, M.D.
Dr. Lown was born in Lithuania in 1921 and emigrated to the United States with his parents at the age of 13. A graduate of Johns Hopkins University School of Medicine, he is the original developer of the defibrillator and is currently Professor of Cardiology Emeritus at the Harvard School of Public Health. Dr. Lown is also an internationally known peace activist and was one of the founders of the Physicians for Social Responsibility in 1962 and the co-founder of the International Physicians for the Prevention of Nuclear War (IPPNW) in 1980 with Dr. Evgeni Chazov of the former Soviet Union. IPPNW was awarded the Nobel Peace Prize in 1985.
ツイート
Return