Hiroshima and the World: Inspired by Hibakusha 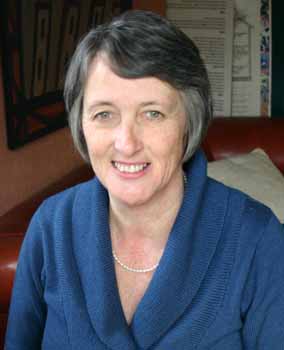 Kate Dewes
Dr. Kate Dewes was born in Hawera, New Zealand in 1953. She coordinates the Disarmament and Security Centre and taught Peace Studies at Canterbury University for 20 years. She was on the Public Advisory Committee on Disarmament and Arms Control; the UN Study on Disarmament and Non-Proliferation Education; a Vice President of the International Peace Bureau, and became an Officer of the New Zealand Order of Merit in 2001. Her 1999 PhD from the University of New England is on the history of the World Court Project. She is currently on the UN Secretary General’s Advisory Board on Disarmament Matters.

In 1975, I was a 22-year-old high school music teacher in New Zealand. The school syllabus included a Threnody ('song of lament') for the Victims of Hiroshima by Penderecki. Until then I had never heard of hibakusha. My life changed forever when I read their stories, and showed photos and their paintings to my young students. The hibakusha inspired me to dedicate my life to help them abolish nuclear weapons.

At that time there were over 52,000 nuclear weapons. Hundreds more were being tested by the US, UK and France in the Pacific: in Australia, Tahiti, the Marshall Islands and Kiribati. Radioactive fallout from these was even detected in mothers’ milk in New Zealand. Regional protest groups emerged, enraged that the "superpowers" would use our "Ocean of Peace" to test weapons causing severe health and environmental effects, and capable of annihilating most life on the planet. They lobbied their governments and, in 1973, New Zealand, Australia and other Pacific Islands took France to the International Court of Justice (World Court) and effectively forced future tests underground. When US warships, probably carrying nuclear weapons, visited our ports under the Australia New Zealand US (ANZUS) military alliance in 1976, peace groups organised "peace squadrons" of hundreds of small boats to oppose them. Thousands of people demonstrated on the streets throughout the country demanding that New Zealand should become a nuclear free zone.

Ordinary citizens, including young mothers like myself, were angry that ANZUS membership made us a target for the enemies of the US and her allies, and we did not want nuclear weapons used against others in our defence. We worked hard over the next decade to establish 300 small neighbourhood peace groups throughout the country who educated the public about the dangers of both nuclear weapons and nuclear power. We showed films and exhibitions about hibakusha, and doorknocked nearly every home asking people to display nuclear free stickers on their homes and cars, and in their workplaces.

By 1984, 66% of municipal councils were nuclear free and the new government pledged to ban visits by nuclear armed and powered vessels. Prime Minister David Lange believed that by rejecting the nuclear umbrella, New Zealand was strengthening its national security. He said: “We were, simply, safer without nuclear weapons in our defence than with them…”

Although the government came under heavy US, British and Australian pressure, they were bolstered by a massive mobilisation of public support by the peace movement in both New Zealand and the US. The French government's terrorist bombing of Greenpeace's anti-nuclear flagship, Rainbow Warrior, in Auckland coincided in 1985 with the creation of a South Pacific Nuclear Weapon Free Zone. When the Chernobyl nuclear power plant exploded in 1986, the combination of these events ensured the passage into law of the Nuclear Free Act. In 1986, retired magistrate Harold Evans, from our local Christchurch peace group, initiated the World Court Project. This grew into a worldwide campaign to persuade the UN General Assembly to request an advisory opinion from the Court on the legal status of nuclear weapons. It took nearly a decade to build support and momentum nationally and internationally, helped by the improved political climate after the end of the Cold War.

In 1994, for the first time the World Court accepted evidence from citizens which included 11,000 signatures from international judges and lawyers; a sample of the 100 million signature Hiroshima and Nagasaki Appeal, and material surveying 50 years of citizens' opposition to nuclear weapons. In addition, over 700 citizen groups worldwide endorsed the Project. Forty-four states and the World Health Organisation participated in the biggest World Court case ever, with two-thirds arguing for illegality.

Just before the oral hearings in 1995, the Court accepted 4 million individually signed Declarations of Public Conscience, including over 3 million from Japan. After strong domestic pressure, the Japanese government allowed the Mayors of Hiroshima and Nagasaki to testify. They confronted the 14 judges with huge photographs depicting the devastation and suffering. Over 50 hibakusha were present to witness this historic legal challenge. A woman from the Marshall Islands powerfully described how many islanders are still dying of cancers and women give birth to deformed babies including some which look like "jellyfish."

In July 1996, the Court delivered its historic Advisory Opinion that "a threat or use of nuclear weapons would generally be contrary to the rules of international law applicable in armed conflict, and in particular the principles and rules of humanitarian law." The judges also unanimously agreed that "There exists an obligation to pursue in good faith and bring to a conclusion negotiations leading to nuclear disarmament in all its aspects under strict and effective international control."

The World Court Opinion helped spark new initiatives to achieve a nuclear weapon free world. As a former member of the World Court Project Steering Committee, I was invited in 1998 to join the Middle Powers Initiative. This campaign by a network of international citizen organisations worked closely with seven countries, including New Zealand, which had played important roles in the World Court Project. Called the New Agenda Coalition, they lobbied effectively within the UN and, at the 2000 Non Proliferation Treaty (NPT) Review Conference, secured an unequivocal commitment from the nuclear weapon states to eliminate their nuclear weapons.

The Middle Powers Initiative also established the Parliamentary Network for Nuclear Disarmament (coordinated by New Zealander Alyn Ware, another leader of the World Court Project). It now has over 500 members in 70 countries with regular newsletters, and a website translated into 11 languages including Japanese. Recently, politicians from different parties in Belgium, Germany, Holland, Italy, Turkey and the UK called for the removal of US nuclear weapons from their soil after a US Air Force investigation concluded that "most sites" used for deploying nuclear weapons in Europe do not meet US Department of Defense minimum security requirements. In June 2008, 110 US tactical nuclear weapons were withdrawn from Britain, which means that there are now no US nuclear weapons there for the first time since 1950.

Following the presentations by the Mayors of Nagasaki and Hiroshima to the World Court in 1995, they were inspired by the 1996 Opinion to renew their call for nuclear abolition and launch an international membership drive for Mayors for Peace. To mark the 10th anniversary of the Court's Opinion in 2006, Mayors for Peace launched the Good Faith Challenge and the "Cities Are Not Targets" project. Today there are 2,708 member cities in 134 countries. Of these, 89 are capital cities, almost half the world’s capitals, including Moscow, Beijing, London and Paris.

Other states supportive of the World Court Project, led by Malaysia and Costa Rica, sponsored UN resolutions calling for a Nuclear Weapons Convention--an enforceable global treaty to ban nuclear weapons. A consortium of lawyers, scientists and disarmament experts drafted a Model Nuclear Weapons Convention which was distributed by the UN Secretary-General in 1997 for states to consider. In 2007, the Model Nuclear Weapons Convention was updated, and translated into Japanese. The proposed treaty, and the more general call for nuclear abolition, have received growing support from across the political spectrum and from a wide array of constituencies including former Prime Ministers and Foreign Ministers, mayors, military leaders, academics, parliamentarians, scientists, governments, Nobel Laureates, NGOs and the general public.

On United Nations Day last year, UN Secretary General Ban Ki-moon launched a five-point plan for nuclear disarmament. He called for the nuclear weapon states to fulfil their obligation under the NPT by pursuing "a framework of separate, mutually reinforcing instruments. Or they could consider negotiating a nuclear-weapons convention, backed by a strong system of verification, as has long been proposed at the United Nations."

With the world's total of nuclear weapons now half what it was in 1975, and US President Obama himself calling for nuclear abolition, the time is ripe for all states to work together to take weapons off high alert; make immediate and drastic cuts to their nuclear arsenals; cancel missile defence systems; sign and ratify a Comprehensive Nuclear Test Ban Treaty; and negotiate a Fissile Material Cut-off Treaty and an Outer Space Treaty. There has never been a more hopeful moment for us all to press our leaders to start negotiating a Nuclear Weapons Convention. Then the pain and anguish suffered by hibakusha everywhere will not have been in vain, and our dreams and aspirations for a nuclear free world can be realised.