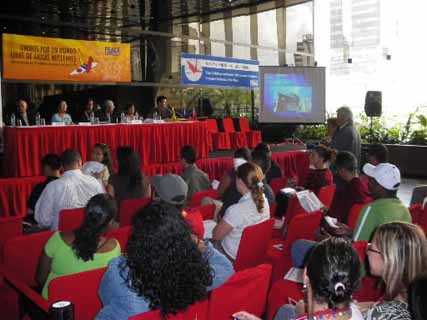 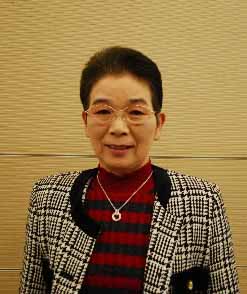 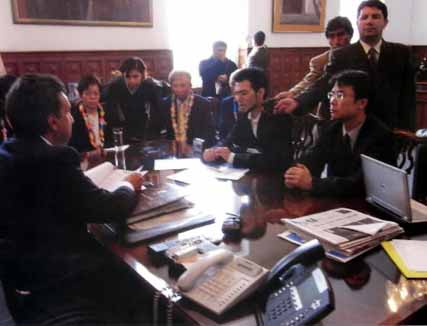 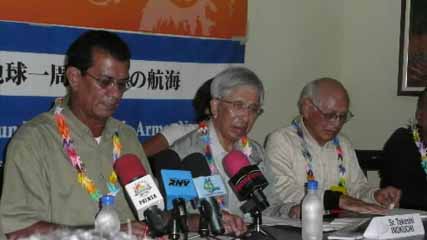 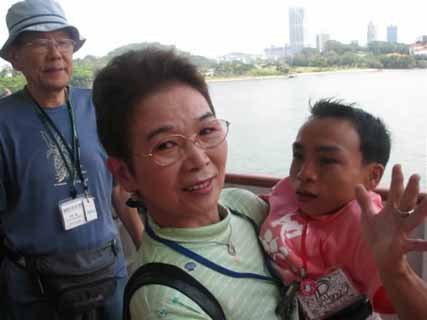 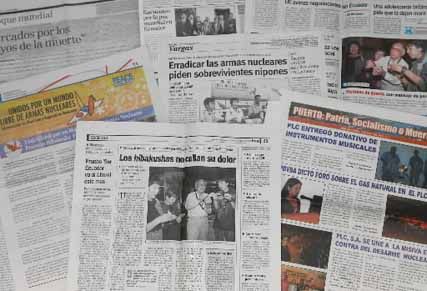 A group of atomic bomb survivors returned to Japan in mid-January after a round-the-world cruise aboard the ship operated by Peace Boat, a non-profit organization. During the course of their 129-day voyage they called at 23 ports in 20 countries and described their experiences of the atomic bombing to more than 2,000 people. The group of 103 A-bomb survivors from Hiroshima, Nagasaki, South Korea, Brazil and other countries lived aboard ship with 600 others, many of them young people. Many members of the group were “young” survivors who were exposed to the atomic bomb in utero or shortly after they were born. For some it was their first time to speak publicly of their experiences of the atomic bombing. The emergence of a new peace movement could be sensed at the many meetings held both in port and aboard ship.

This was our first round-the-world cruise that focused on the atomic bomb survivors and their stories. They also had many opportunities to interact with the young people on board ship, so this cruise was a little different from those we’ve gone on in the past.

Because it was a long voyage, we had a lot of time. Some of the survivors who were exposed to the atomic bomb as infants or before birth had never publicly discussed their experiences. Those “young” survivors were able to spend plenty of time talking with others who are veterans of the peace movement.

A sort of mutual “training” between the young survivors and the young people aboard the ship also took place. Although they have no memory of the atomic bombing, the young survivors have started to feel that they would like to do something to contribute to peace and are considering how they might do that. Meanwhile, the young people who share a common awareness of the issues, offered to help out in various ways. Thus a new peace movement emerged.

I’d like to look into inviting young people as well as A-bomb survivors on our next trip, which will begin in July. I’d like the “trainers” to come along to enhance the mutual training.

The response we received in the cities we visited was fantastic. Mayors turned out when they heard there were A-bomb survivors aboard the ship. The vice president of one country agreed to meet with them. They also received many requests for interviews with local news media. As a result we got a lot more cities to join Mayors for Peace and to support its Hiroshima-Nagasaki Protocol. That enthusiasm also led to the testimony of A-bomb survivors before the First Committee of the United Nations General Assembly (Disarmament and International Security) and the International Commission on Nuclear Non-proliferation and Disarmament. I hope these accomplishments will help promote the abolition of nuclear weapons.

In Greece I met a man who had miraculously survived the Nazi cruelty. When I asked him if he felt guilty about having survived, he said, “I have no regrets. I am living for peace.” When I heard that, the suffering I’d experienced all these years was swept away.

I’ve never forgotten all the bodies in the river or the other scenes I saw in Hiroshima, which was filled with the stench of death. After I graduated from junior high school, I got a beautician’s license. I struggled to make ends meet, but I never stopped wondering whether I should even be alive.

My father was killed in the war. After the atomic bombing, my mother walked around Hiroshima with me, my brother and my sister in tow, searching for our relatives. Three years later she died. I hated the war, which had taken my parents from me. I went on the cruise to tell the people of the world about the horrors of war.

I spoke of my experiences of the atomic bombing in English and was also interviewed by the news media overseas. In every country, when I finished telling about my life since the bombing, people hugged me. I started studying English at the age of 55 because I didn’t get the opportunity to do so when I was young.

There were so many things I didn’t know about such as the history of the Spanish Civil War and the use of defoliants in Vietnam. During the voyage I came to feel strongly that my purpose in life is to study more, learn more about others, and then tell people in other countries about my experience of the atomic bombing.

A week after I got home I received a letter from an official in the British Ministry of Defence. It was a reply to a letter I sent from the ship to British Prime Minister Brown at the urging of a British peace activist. Until then I’d never thought about doing things like making appeals to politicians in foreign countries.

In the letter he said that Britain is moving forward with nuclear disarmament and that he wanted to build momentum for the abolition of nuclear weapons. It was only a cursory reply, but I felt that what I had to say had been heard. Next I want to investigate the situation in the U.S., a nuclear superpower, and write to President Obama. And I plan to resume volunteering as a guide in Peace Memorial Park.


Responsibility to tell of the suffering caused by war
Junko Watanabe, 66, resident of Sao Paolo, Brazil

The thing I felt most strongly as a result of participating in this voyage was that we must have a global perspective.

We met victims of war wherever we went. We also met victims of radiation poisoning. Many of those in the South Pacific islands who were exposed to radiation as the result of nuclear tests died without receiving any assistance from the countries that conducted the tests. People who work in uranium mines in Australia are also suffering. From now on I’d like to talk not only about my experience of the atomic bombing but also about the effects of war.

I have mixed feelings when I’m asked to talk about my experiences because I don’t remember the atomic bombing. Six years ago I began working with the Association of A-bomb Survivors in Brazil, and I came upon the memoirs of survivors living in South America. I became engrossed in reading them. They gave me goose bumps. That’s when I realized what it had really been like. A video about the atomic bombing that we have in the office formed the basis of my account. Those of us who were too young to remember the bombing have an obligation to consider what we will do from now on and how we will get the younger generation to carry on our efforts.

While on the ship I made the acquaintance of A-bomb survivors who live in Australia, Canada, South Korea, and Mexico. Until recently the alliance of survivors living outside Japan primarily involved those living in Brazil, the U.S., and South Korea. I hope we can create a broader international alliance.

I was exposed to the atomic bomb in Ushita, 2.3 kilometers from the hypocenter. The left side of my body was burned. I decided to join the round-the-world trip after hearing at an orientation session that it was important for the survivors of the atomic bombing to tell their stories. I figured I could at least tell about how I was burned and the treatment I underwent.

When I was a student at Nobori-cho Junior High School I was member of the committee to erect a monument in memory of Sadako Sasaki, who was one year behind me at the school. We solicited donations from schools throughout the country. All of us that age were scared when we learned about her suddenly becoming ill 10 years after the bombing.

I always wondered whether there wasn’t something I could do. After I graduated from high school I moved to Kobe. I didn’t know any other A-bomb survivors there. On this trip I felt a sense of solidarity with the other survivors. I don’t have any specific ideas, but I’d like to continue to be of use somehow.

I was surprised that the young Japanese people on board the ship had never heard of Sadako. She is better known overseas. In India I saw a musical in which Sadako was the main character. The 8- and 10-year-old kids sitting behind me knew all about her. I was struck by the fact that in India they didn’t use the word "hibakusha" (atomic bomb survivor) but rather "hibakushi" (death by atomic bombing).

During the voyage I spent two weeks in Venezuela as a member of the atomic bomb survivor delegation. I described my experiences of the bombing in more than 10 places. There were a lot of tough questions about U.S. responsibility for the bombing and suggestions that we should ask the U.S. to pay for the cost of preserving the A-bomb Dome. Some people asked us if we hated the U.S. I wasn’t surprised since Venezuela is an anti-American country.

I said I felt that if nuclear weapons were not abolished others would experience the same suffering we did and so working for their abolition was more important than hatred now. The people understood my feelings. After talking about my experiences, some people wanted to shake my hand. They would say, “Let’s work together.”

I’ve asked the others on the cruise to pursue cultural exchanges with Venezuela. When I described my experiences of the atomic bombing to the Education Minister, I mentioned that in the past we had sent drawings done by children of Hiroshima to a foundation in the U.S. He suggested doing something like that with Venezuela in order to promote peace. The fact that our efforts gained the support of a minister of the Venezuelan government made me feel that they were part of something greater. By interacting with people in other countries, I’d like to build support for the movement to abolish nuclear weapons. In Venezuela, we got 23 cities to join Mayors for Peace. That’s more than 80 percent of the cities we collected throughout this voyage. In this way, too, I could help contribute to the positive results of the trip.