Hiroshima Memo: Conveying a message of peace and reconciliation to the world 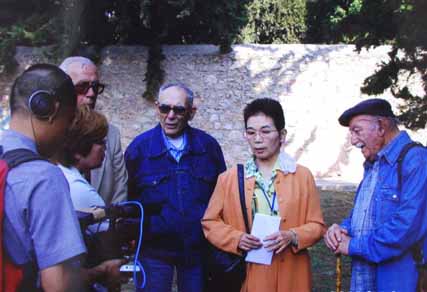 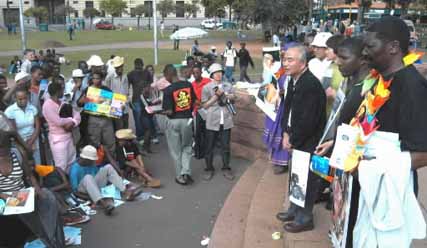 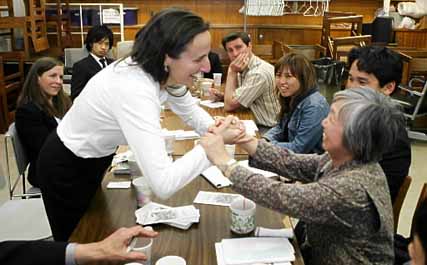 Sharing and learning. This is essentially what the group of participants experienced on the recent Global Voyage for a Nuclear Weapons Free World, a project sponsored by Peace Boat. Each individual may have shared a different message and learned different things. But all those who took part have surely broadened their horizons through rewarding experiences that will come to enhance their activities of conveying their A-bomb experiences.

Over the years, many A-bomb survivors (hibakusha), individually or in groups, have visited other countries to relate the true horror of the atomic bomb and call for the abolition of nuclear weapons. They have also been engaged in a variety of anti-nuclear activities, such as speaking out to the public and making presentations, even at the United Nations.

Of particular note is the Hiroshima-Nagasaki World Peace Pilgrimage, organized by Barbara Reynolds (1915-1990) in 1964, at the height of the Cold War between the U.S. and the former Soviet Union. Ms. Reynolds was an American woman who lived in Hiroshima while her husband was working here. Personally providing most of the funds for the project, she gathered some 40 people, including A-bomb survivors, scholars, and interpreters, and the group visited eight countries in 75 days. These countries included the U.S., the Soviet Union, the U.K., and France--all nuclear powers--as well as Canada, Belgium, West Germany, and East Germany.

In the U.S. state of Missouri, they met Harry S. Truman, the former president who had authorized use of the atomic bomb. One of the women on the pilgrimage recalled, “Many of the hibakusha felt bitterness.” In gatherings held across the country, she encountered people who justified the atomic bombings. But she was also warmly welcomed to stay in the home of an American family. Because of the keloid scars on her face and arms, she had suffered discrimination in Japan. The invitation to stay with this family was the first time since the bombing that she felt others treated her humanely. The experience moved her to hope that the family would never experience the sort of pain she faced as a result of the atomic bombing.

Forty years after the World Peace Pilgrimage, the Chugoku Shimbun, in cooperation with the Hiroshima International Cultural Foundation, organized the Hiroshima World Peace Mission, which was launched in 2004 and lasted for about 18 months. In the wake of the terrorist attacks in the United States in 2001 and the “war on terror” begun by the former Bush administration, many around the world were feeling helpless in the face of chain reactions of violence and hatred in the form of terror and retaliation.

Responding to these conditions, the Hiroshima World Peace Mission was an effort to convey the voice of the city and its spirit of peace and reconciliation. This spirit has been brought to life by the citizens of Hiroshima through the lessons learned from enduring the unprecedented devastation of the atomic bombing. Directly communicating this horrific reality to the citizens of the nuclear powers, as well as people living in areas of conflict, was at the heart of the project.

A total of 29 people, including nine A-bomb survivors, were selected for the Peace Mission. They were divided into six groups, and, along with reporters and photographers, visited 13 countries: the seven nuclear powers of the U.S., Russia, U.K., France, China, India, and Pakistan as well as South Korea, Iran, Spain, South Africa, Bosnia-Herzegovina, and Ukraine.

In China and South Korea, which Japan once invaded and occupied, the participants heard from people who had been victimized by the Japanese military. As a one-sided account of A-bomb experiences would not further communication, speaking face-to-face, from the same footing as other victims of wars, enabled mutual understanding to develop.

Members of the Peace Mission appealed to the people of India and Pakistan, nations that confront one another with nuclear weapons, to seek reconciliation. In Iran, they met with survivors of Iraq’s poison gas attacks. These survivors were minority Kurds and were, particularly at that time, not offered sufficient support from their fellow Iranians. In Spain, they shared views with survivors and families of victims of the train bombing in Madrid. Nearly 200 people were killed in this terrorist attack which caused deep physical and mental suffering. And in South Africa, a country that has dismantled its nuclear warheads, they spoke with people burdened by discrimination, poverty, and AIDS.

Wherever they went, the A-bomb survivors and youth who took part in the Peace Mission discovered how difficult, yet how vital, it is to communicate the message of Hiroshima. They also came to realize how important it is to learn from the people they met. After returning to Hiroshima, they began paying greater attention to the world around them, including issues of conflict, poverty, and human rights. Because of the valuable time they spent overseas, members of the Peace Mission have strengthened their ability to convey their messages. Many participants, including those who were students at the time, have been working to transmit these messages to the world through a range of efforts, such as NGO activities.

The A-bomb survivors who took part in the Peace Boat voyage, through their exchanges with people from around the world, have surely felt anew the importance of the role A-bomb survivors can play in promoting a peaceful world that is free of nuclear weapons and war. One of the survivors commented that the message of “No more retaliation” should be added to the idea of “No more Hiroshimas / No more Nagasakis.” This message suggests that we must move through the process of overcoming enmity and reaching a place of reconciliation, forgiveness, and dialogue--no matter how difficult it may be--in order to realize peace in the world.

I find it heartening that many survivors who took part in the project are now highly motivated to relate their experiences, seeing the conclusion of the voyage as a time to further their activities. For the youth onboard, who had never thought deeply about the meaning of A-bomb experiences, the four months they spent with the survivors touched them in a significant way. They have been awakened to their role as inheritors of the memories of A-bomb survivors, as next-generation tellers of the story of Hiroshima and Nagasaki. This newfound awareness of our youth is an important development.

As a result of this successful project, Peace Boat is planning another “voyage of testimony” in July with the participation of A-bomb survivors and youth. A surge in global anti-nuclear sentiment is crucial in realizing a world free of nuclear weapons. Of special importance are the voices of the citizens in nuclear weapons states, particularly the U.S. and Russia.

The last voyage sailed to 23 ports in 20 countries, but the only nuclear power visited was India. Hopefully, the next itinerary can include more stops in nuclear powers and provide more opportunities for the participants to engage in dialogue with the citizens of these nations. As the A-bomb survivors and Japanese youth have much to share and learn, the citizens of the nuclear weapons states can learn and share in return.