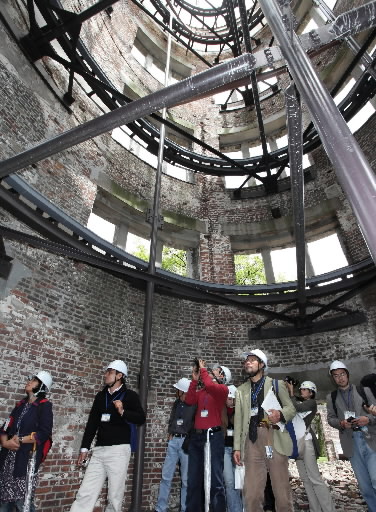 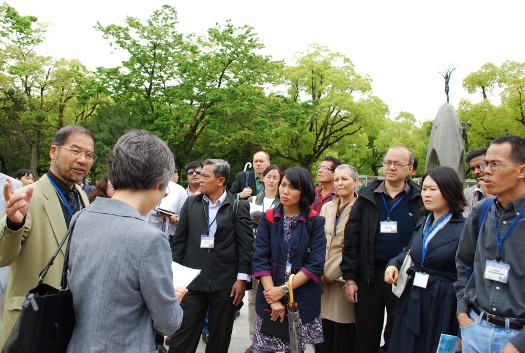 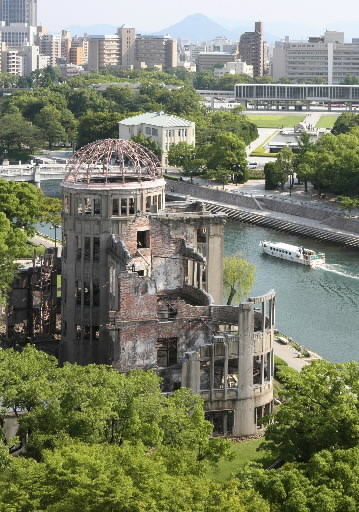 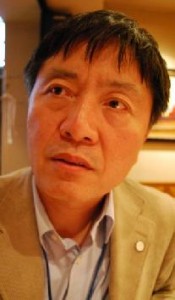 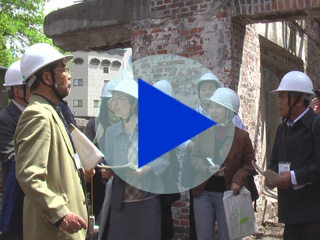 August 6 will mark the 60th anniversary of the implementation of the Hiroshima Peace Memorial City Construction Law, whose lofty goal is “to provide for the construction of the city of Hiroshima as a peace memorial city to symbolize the human ideal of sincere pursuit of genuine and lasting peace.” The law served as the basis for the construction of Peace Memorial Park, which, along with the A-bomb Dome, a UNESCO World Heritage site, is a symbol of the atomic bombing of Hiroshima.

In April the Hiroshima office of the United Nations Institute for Training and Research (UNITAR) held a five-day international workshop to consider the preservation of the Hiroshima’s World Heritage sites. The debate that went on at the workshop provided an opportunity to reassess the value of the A-bomb Dome and Peace Memorial Park.

Debate over history and its lessons

Layers of exposed steel trusses crisscross the A-bomb Dome. “If these trusses weren’t here, the dome would collapse. They are here to support the dome and to preserve it as it was just after the atomic bombing,” Norioki Ishimaru, 68, a professor at Hiroshima International University, told the trainees when they toured the inside of the dome.

The management and conservation of Hiroshima’s two World Heritage sites, the A-bomb Dome and Itsukushima Shrine, are the subject of an annual workshop held by the Hiroshima office of UNITAR. The theme of this year’s workshop, the sixth, was “Conservation for Peace.” About 40 participants from 24 countries in the Asia-Pacific region attended.

During field work in Peace Memorial Park, Professor Ishimaru explained the intentions of Kenzo Tange, the park’s designer. “The Peace Memorial Museum, the Cenotaph for the A-bomb Victims, and the A-bomb Dome form a north-south axis,” he said. “Tange wanted the park to not only commemorate the victims of the bombing but also to lead to the creation of a new peace.” Professor Ishimaru also talked about the multi-story apartment building in the Moto-machi district north of the A-bomb Dome and the design of the city’s Naka Waste Incineration Plant, which was built at the south end of the axis in 2004. “Since the end of the war, this axis has been taken into consideration in regard to city planning,” he said.

“I was struck by the fact that every aspect of the park has a meaning, such as prayers for the repose of the souls of the victims and for peace,” said Hatthaya Siriphatthanakun, 33, of the Office of Archaeology in the Fine Arts Department of the Thailand Ministry of Culture.

Reza Sharifi, 30, who works with cultural assets at a museum in Afghanistan, said, “As a person who lives in a country that has been devastated by a prolonged war, Peace Memorial Park was very moving. The people of Afghanistan also need a place where they can sense peace.”

Just after the end of the war, local lawmakers repeatedly lobbied the government for funds to rebuild the devastated city of Hiroshima. As part of that process, the Hiroshima Peace Memorial City Construction Law was enacted in 1949, and the decision was made to build a peace park on the site of Nakajima Honmachi, which had been a thriving business district.

“New York is still struggling with giving a meaning and shape and form to its plans for the World Trade Center site,” said Nassrine Azimi, director of the UNITAR Hiroshima Office. “The A-bomb Dome and Peace Memorial Park, which are in the center of Hiroshima, embody the city’s atomic bombing experience and its recovery and are unlike any legacy in any other country.”

It was decided to preserve the A-bomb Dome in 1966, 12 years after the completion of Peace Memorial Park. Initially, there was opposition. Some survivors of the bombing wanted the dome to be dismantled so they could forget the bombing, and then Mayor Shinso Hamai said it should not be preserved if money would have to be spent to do so. But, with children as its driving force, the movement to preserve the dome grew.

The children’s fundraising and petition drives were inspired by the diary of Hiroko Kajiyama, a survivor of the bombing who died of acute leukemia in 1960 at the age of 16. She wrote, “Will the Industrial Promotion Hall [A-bomb Dome] forever remain as a painful reminder to the world of the horrible atomic bomb?”

When he visited Hiroshima, Kim Sothin, 37, of the Cambodian Ministry of Culture, was reminded of his experiences in that war-torn country when he was 8 years old. “I fled, carried on my mother’s back through dead bodies lying here and there,” he said. “The lessons of war are inscribed in the A-bomb Dome.”

Soyoung Yoo, 29, an employee of a non-governmental organization in South Korea, had a different perspective. “Peace Memorial Park emphasizes the destruction that resulted from the bombing. When I thought of the suffering the people of Korea endured at the hands of the Japanese Imperial Army, I grew a little weary.” Nevertheless, she also expressed an interest in learning more about the background behind the efforts to preserve the A-bomb Dome and the construction of the park.

Ms. Yoo is active in an effort to preserve the natural environment in the demilitarized zone, which has divided the Korean peninsula since the ceasefire to the war in 1953, and to have it recognized as a World Heritage site as a step toward peace. “Those of my grandmother’s generation, who experienced the war, regard North Korea as an enemy and strongly oppose this movement. I would like to find a way to get past this opposition by examining the history of Hiroshima,” she said.

Professor Ishimaru said that people must also take note of the wishes of the lawmakers who fought for the passage of the Hiroshima Peace Memorial City Construction Law and those who were involved in the effort to preserve the A-bomb Dome. He also said that people must be made aware of the city’s reconstruction around the “axis” in the city and the fact that people once lived on the site where the park was built.

While the verdant Peace Memorial Park has become a popular spot to relax, people are sometimes rowdy near the memorials, and trash can be found in the park. Thirteen years have passed since the A-bomb Dome was listed as a World Heritage site, and interest in the significance of its preservation is waning. Perhaps the citizens of Hiroshima need their own opportunity to reassess the value of the dome and Peace Memorial Park.

How do you assess the value of the A-bomb Dome and Peace Memorial Park?
The A-bomb Dome in Hiroshima, where a nuclear weapon was used for the first time in the history of humankind, tells of the tragic experiences of World War II. While issuing a plea for the abolition of nuclear weapons and reminding us of the preciousness of a lasting peace, it also warns of the horror that results when science and technology are misused. Every year many of the UNITAR trainees come from war-torn regions in Asia and the Middle East. Walking through Peace Memorial Park and seeing the A-bomb Dome creates “peace in the minds of people.”

There are 25,000 nuclear weapons in the world today, and wars continue to be waged. Are the A-bomb Dome and Peace Memorial Park fulfilling their role?
In a speech in Prague, U.S. President Barack Obama said that the goal of a world without nuclear weapons “will not be reached quickly.” In the Middle East and other war-torn regions, history, religion and ethnic problems are intertwined. However, Hiroshima’s effort to conserve a “peace memorial for all humankind” for the next generation is contributing to world peace.

An employee of the government of Iraq who participated in the workshop in Hiroshima a few years ago proposed creating a peace park along Iraq’s border with Iran. If the concept he came up with in Hiroshima were to be carried out, both countries could commit to memory the tragic experiences of the past while joining together to work for peace for their children.

Trainees from Asian countries have said that not only Japan’s victimization from the bombings but also the history of its aggression should be addressed.
Around 1943 the Japanese military took my uncle from his home in a rural area near Yantai in Shangdong Province to serve as a laborer. He was 17 or 18. He never came back. Though my mother spoke of him calmly, many of the people from China, South Korea and other Asian countries who visit Hiroshima have terrible memories of the war.

Hiroshima’s World Heritage site tells of the destruction of the atomic bomb and the tragedy of war and issues a strong appeal for a lasting peace, but peace cannot be recounted from one side only. To be more successful at communicating the message of hope for world peace and the ultimate elimination of nuclear weapons, it is important to reflect the historical context of the Second World War, and acknowledge the suffering of millions of people, especially in Asian countries.

The A-bomb Dome is deteriorating, and maintenance costs are rising. There is also little understanding on the part of the public of the height restrictions on nearby buildings.
There is a growing international and cross-border movement to protect World Heritage sites like Bamiyan. If the local community reassesses the value of the A-bomb Dome, one of Hiroshima’s World Heritage sites, people would come to believe that it must be carefully conserved, but I believe ultimately the people of Hiroshima should decide its future.

Qunli Han
Born in Beijing. Graduated from the Chinese University of Science and Technology in 1980. Went to work at the Paris headquarters of UNESCO in 1989 and became Senior Program Specialist for Ecological Sciences at the Jakarta office in 1998. Assumed his current post in September 2007. Has served as a resource person for the annual workshops on Hiroshima’s World Heritage sites held by the Hiroshima office of UNITAR since they began.