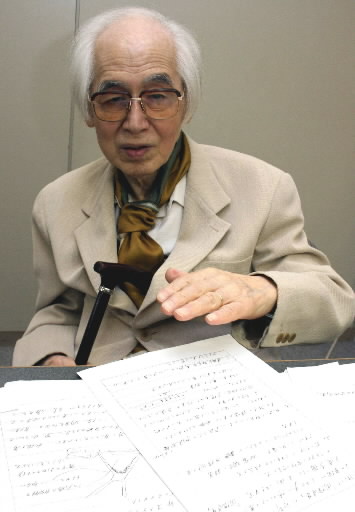 Sachio Otani, 85, a Tokyo resident, is professor emeritus of Tokyo University. As a graduate student, he assisted Mr. Tange with the project. At that time, Mr. Tange was an assistant professor at Tokyo University. The Chugoku Shimbun asked Mr. Otani about his thoughts concerning the park, a symbol of the reconstruction of the A-bombed city.

You accompanied Mr. Tange for a visit to Hiroshima in the fall of 1946, one year after the bombing, to conduct research on the reconstruction program commissioned by the Japanese government.
Unlike other cities which had been burned down in air raids, we found hardly any people in downtown Hiroshima in 1946. The city had been turned into rubble as far as the eye could see and there was no sign of the city that existed before the bombing. For instance, in Tokyo, when temporary shelter was built, people would return to the area of attack. But in Hiroshima, which had been utterly devastated by the bombing, I felt that the city needed a symbolic “banner” for its reconstruction.

What was the process involved in conceiving the design for the park in 1949?
The geography of the Hiroshima Delta is defined by the Chugoku Mountains, which lie east to west, and the Otagawa River, running from north to south. So we decided to use the concept of “axis”--east-west and north-south--which the people of Hiroshima feel a natural affinity toward, to create a dynamic quality for the city. We felt that the east-west axis could be established by Peace Boulevard, becoming a core thoroughfare for citizens’ activities. At the same time, we had some difficulty determining the north-south axis to fulfill the concept. Professor Tange drew a number of designs. After an arduous effort, he decided to use the idea he drew on the back of a cigarette pack. By chance, the cigarette brand was called “Peace.” This design became the prototype for the park and featured the Atomic Bomb Dome on an axis in line with the Cenotaph for the A-bomb Victims and Peace Memorial Museum. It was an extraordinary idea, embracing the A-bomb Dome as the symbol of the atomic bombing experience as well as the “banner” of the reconstruction of Hiroshima.

What were you in charge of?
I was in charge of executing the designs for planting the park’s trees and for Peace Memorial Museum. The site where the park sits was the very place where a great number of people died in agony. I had heard about the horror of the atomic bombing from my elder sister. Due to her husband’s work, she was living in Hiroshima at the time and was about 2 kilometers from the hypocenter when the bomb exploded. We created a design that would include a lot of trees in an orderly fashion, considering them grave markers for maintaining memory of the dead.

As for the Main Building of Peace Memorial Museum, we based the concept on a traditional architectural style in Japan which uses a high floor for warehouses, in order to protect valuables from humidity and rodents. The pillars which elevate the building can also serve as a gate to this place of prayer from Peace Boulevard. The A-bomb Dome can also be seen from the boulevard.

In Mr. Tange's letters, we find references indicating that he recommended Isamu Noguchi, an American sculptor of Japanese ancestry, as the designer for the Cenotaph for the A-bomb Victims.
Professor Tange felt that the cenotaph was akin to a work of art. This is why he asked Mr. Noguchi to create the design. In his design, Mr. Noguchi tried to express the horrific death wrought by the bombing, symbolized by the exposed organs of the human body. His appointment, however, was rejected by the people supervising the project on the grounds that “Isamu Noguchi is a citizen of the country that dropped the atomic bomb.” As a result, Professor Tange himself designed the cenotaph, which gently shelters the stone chest in which the register of the dead is held. The cenotaph manifests the “sense of remorse” borne by the survivors, who felt utterly helpless to save the victims.

I understand that Mr. Noguchi proposed to Mr. Tange that steps be placed in front of the cenotaph.
The cenotaph becomes more compelling when it stands above the line of sight, instead of on a flat surface. We included the steps as we were revising the design, imagining the cenotaph, the core space for prayer, as the “stage” and the surrounding green space as the “audience.” I remember Mr. Noguchi proposed this idea to Professor Tange.

Mr. Tange's letters also note difficulty in securing financing for the project from the central government.
Professor Tange was desperate to secure the budget through his acquaintances in the government. I suspect that his sense of guilt compelled him to commit to the reconstruction effort, as he did not exercise resistance against the military during the war.

What do you propose in regard to city planning today in Hiroshima?
Buildings and trees keep the memories alive of the people who lived or worked there. Through careful consideration, I hope that the buildings and trees worth preserving will be preserved.

Kenzo Tange's letters
Twenty-three letters sent by Kenzo Tange, selected as the architect to design Peace Memorial Park, to then Hiroshima Mayor Shinso Hamai and other figures for about two years, from 1949, are kept at the Hiroshima Municipal Archives. In 1989, a former official working for the City of Hiroshima donated them to the archives on the condition that they be held from the public until after Mr. Tange’s death. The letters include previously unreported communications with Isamu Noguchi, a sculptor who designed the Peace Bridges, and an episode in which he negotiated with the central government to raise subsidies for the project by describing the facilities in the park as a “base for peace activities.”