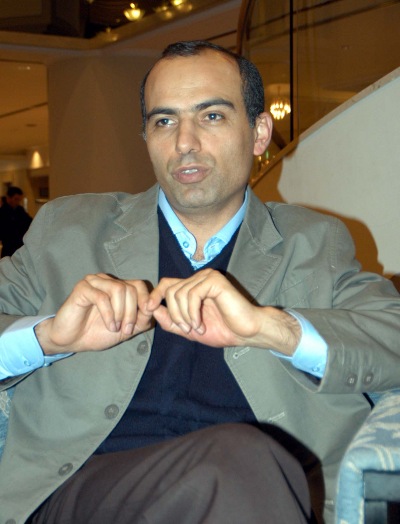 Eight Iranian physicians who are treating poison gas sufferers from the Iran-Iraq War (1980-1988) are studying advanced medical techniques at Hiroshima University Hospital and other locations from November 23 to 28. This is the second such training since last year. The grassroots exchange that citizens of the two countries began five years ago has developed into a linkage among medical institutions. Dr. Shahriar Khateri, 39, has served as a bridge for the exchange program as head of international relations for the Society for Chemical Weapons Victims Support (SCWVS), an Iranian NGO. I spoke with Dr. Khateri about his views regarding the significance of this exchange with Hiroshima and his expectations for the program.

What is the focus of the training in Hiroshima?
Doctors in Hiroshima have long treated patients who once worked for the old Japanese Imperial Army's poison gas factory located on Ohkunoshima Island in Takehara City, Hiroshima Prefecture. They have also gained experience in treating survivors of the atomic bombings that constitute, as well as poison gases, weapons of mass destruction. We can learn a great deal from these two important experiences.

The Japanese doctors have high-level skills based on this experience, and they have access to advanced medical equipment. In this program the Iranian doctors are learning about medical technology and techniques in their areas of specialty, such as internal medicine or dermatology.

Since a group of poison gas sufferers from Iran attended the 2004 Peace Memorial Ceremony, the exchange between the two countries has continued on the citizens' level. What, so far, has the Iranian side gained from Hiroshima?
First, "the spirit of Hiroshima" has had a strong impact on us. While the people of Hiroshima hold sad memories, they still champion the spirit of reconciliation. They are also strongly aware of their obligation, as citizens, to never allow such a tragedy to be repeated. We have found hope in seeing how Hiroshima has risen from the ruins.

The Iranian government's latest survey shows that 65,000 people are still suffering from the aftereffects of poison gas in Iran. But even this fact is little known. I was a soldier at the time and I was one of those who experienced a poison gas attack. Thanks to quick treatment, I was lucky to survive, but many of my friends lost their lives. In cooperation with Hiroshima, I want to inform the world of this situation in Iran.

What sort of exchange would you like to continue in the future?
The mechanism by which poison gases harm the human body is yet to be fully clarified. We want to do research on blood and tissue samples from patients in order to establish more effective treatments. To this end, we need Hiroshima's expertise. The fact that we have instituted this exchange of medical personnel is an important achievement. We hope to form and maintain these relations not simply on the individual level, but on the organizational level, too, such as ties between hospitals.