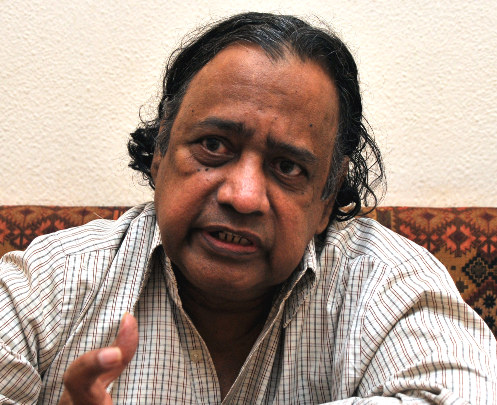 J. Sri Raman
J. Sri Raman was born in July 1943 in the town of Dindigul in India’s southern State of Tamilnadu. He is a freelance journalist and a peace activist, based in Chennai (formerly Madras). He studied political science at the University of Madras and graduated in 1965. Mr. Raman has worked as a writer and editor for New Delhi-based newspapers including Patriot (1984-89), the Hindustan Times (1989-92) and the Indian Express (1993-2000). He writes regularly for the US web journal Truthout. Considering himself an India-Pakistan journalist, he contributes a fortnightly column to the Daily Times of Lahore, Pakistan and writes articles for the Tribune of Chandigarh, India and the Indian e-zine Herald of India. He is also published in the Indian web journal Frontpage. On the peace front, he is the convener of the Journalists Against Nuclear Weapons (JANW) and the Movement Against Nuclear Weapons (MANW), Chennai. He is a member of the National Coordination Committee of India’s Coalition for Nuclear Disarmament and Peace (CNDP).

On November 23, India's Chief of Army Staff General Deepak Kapoor made a statement that deserved a much wider notice than it has received. He told a seminar in New Delhi: “The possibility of a limited war under a nuclear overhang is still a reality, at least in the Indian sub-continent."

These are chilling words for anyone who knows what a nuclear conflict means, who has not forgotten Hiroshima. They illustrate a challenge of new dimensions to peace in South Asia, a real chance of the most disastrous of conflicts erupting in this densely populated region.

It is not everyday that the serving chief of an army talks of the threat of a nuclear war involving his country and its neighbour. The unusual statement is the result of two major developments of the recent period: an acceleration of the nuclear arms race in the region and the accompanying aggravation of India-Pakistan tensions.

The most important impetus for the current round of the nuclear arms race has come from the US-India nuclear deal. The purported deal for bilateral civilian nuclear cooperation for peaceful purposes has given a major boost to India's military nuclear program. By opening the doors for international nuclear commerce, which had been closed to India as a non-signatory to the Nuclear Non-Proliferation Treaty (NPT), the deal gave a significant push to the country's strategic nuclear program in two ways.

The import for nuclear fuel for its civilian nuclear reactors, in the first place, was expected to free up India's indigenous uranium reserves for use in the reactors marked out for the military program. Secondly, spent fuel can be reprocessed to extract plutonium, for use in making nuclear bombs, or in fast-breeder reactors that produce more fuel than they consume.

The US-India deal has also opened the doors for a host of other bilateral deals for India. Similar agreements have followed over the past few months with six other countries: France, Russia, Kazakhstan, Namibia, Mongolia and Canada. Four of these countries--Russia, Kazakhstan, Namibia and Mongolia--have also agreed to sell uranium to India. The flurry of deals presages a future that the peace movement in India--and Pakistan--can only contemplate with acute concern.

Right from the time Bush and Singh had their brainwave about the deal and talked of it in a Washington statement of July 18, 2005, Pakistan has been voicing anxiety over the subject. On July 24, 2008, it warned the international community--in a letter addressed to over 60 nations--that the deal could accelerate a nuclear arms race between Delhi and Islamabad. The protests have been accompanied by a package of steps to enlarge Pakistan's own nuclear-weapon program.

India is marking its march into "the nuclear age," as militarist sections of the media gush over it, in sadly spectacular ways. On July 26, it launched the sea trials of a 7,000-ton nuclear-powered and nuclear-capable submarine, Arihant, with underwater ballistic missile launch capability, the first in a planned fleet of five.

The $2.9-billion plan will complete a nuclear "triad of aircraft, mobile land-based missiles and sea-based assets," as envisaged in India's Nuclear Doctrine adopted in January 2003. Pakistan, with only aircraft and missiles to deliver nuclear weapons, deplored the submarine launch. Promising yet another dimensions to the nuclear arms race, it proclaimed: "Pakistan believes that maintenance of strategic balance is essential for peace and security in South Asia."

India is also building a fast-breeder reactor, to begin operating next year. It has been kept outside the purview of the International Atomic Energy Agency (IAEA) safeguards. The reactor, it has been given out, is capable of raising India's current capacity to make plutonium for nuclear weapons by 300 to 500 per cent.

India has also tested a wide range of land-based missiles. In May 2008, it tested successfully the Agni III missile with a range of 3,500 kms. It is currently developing an advanced version of the same missile with a range of over 5,000 kms. While this will be the showpiece of India's nuclear arsenal, the recently tested, 600-km-range silo-based missile, Shourya, and the 290-km-range Brahmos missile pose a direct threat to the sub-continental neighbor.

The nuclear militarists of Pakistan have not been sitting idle, meanwhile. According to a recent report by Robert S. Norris and Hans M. Kristensen, Pakistan now has more nuclear weapons in its arsenal (70 to 90) than India (60 to 80). US Joint Chiefs of Staff Chairman Admiral Mike Mullen is reported to have told members of US Congress about confirmed reports that Islamabad is rapidly adding to its nuclear arsenal. One of these reports is that Pakistan has launched two new reactors for production of bomb-grade plutonium.

In August, Washington was reported to have cried foul at alleged Pakistani modification of the US-made Harpoon, an anti-ship missile, for use against land targets, especially in India. The US had sold 165 of these missiles to Pakistan. Islamabad's brief statement that "no modification has been made to the missiles under reference" has not settled the issue.

Pakistan has continued tests of nuclear-capable ballistic and cruise missiles. Its fleet of missiles now include Ghauri, Shaheen, and Tarmuk with ranges of 1,600 kms, 740 kms and 300 kms respectively and payloads of one tonne for the first two and 1.8 tonnes for the last.

India, meanwhile, is witnessing a debate between two groups of nuclear militarists. The more hawkish of the two demands that India should go for more nuclear-weapon tests in order to add thermonuclear or hydrogen bombs to its arsenal. Speaking for the less hawkish group in a recent newspaper article, security analyst K. Subrahmanyam and scientist V. S Arunachalam argue: "... even with 25-kiloton fission bombs (as opposed to fusion bombs with yields of several megatons), the damages are going to be far more extensive than what Hiroshima and Nagasaki suffered, given the higher population densities in the cities of China and South Asia and the urban development of recent years."

It is strange that such a debate takes place in the land of Mahatma Gandhi who wrote after Hiroshima: "The atom bomb has deadened the finest feelings which have sustained mankind for ages." The need today, however, is for loud and clear protests against benighted forces that are pushing the sub-continent to the brink of a nuclear war.

It is not as if the mad games of militarists have gone unprotested. In India, right from May 1998 when nuclear-weapon tests shook the desert site of Pokharan in the State of Rajasthan, a multi-faceted peace movement has been striving to make itself heard. But its voice is nearly drowned in the din of nuclear jingoism raised by forces that seek power at the cost of peace and their friends in the pro-establishment media. Street celebrations of the tests by groups hailing the “Hindu bomb” – which were stopped with difficulty from carrying radioactive ash from the site round the country – received wide media coverage. But the protests in various forms – including public rallies, processions and human chains – across India received only paltry notice.

We in the peace movement, however, know from our own experience that the voiceless millions are with us. We in Chennai, capital of the South Indian State of Tamilnadu, discovered soon after the tests how deceptive the claim of a “national consensus’ behind the nuclear-weapon program was. The claim of unanimous media support was countered, for example, with the formation of the Journalists Against Nuclear Weapons (JANW). The propaganda about the tests as a proud feat of Indian science was met with the setting up of the Indian Scientists Against Nuclear Weapons (ISANW).

Workers, employees, women, writers, artists and youth joined these journalists and scientists to create the Movement Against Nuclear Weapons (MANW) in 2000. In the same year, the MANW played a role in the launching of an all-India Coalition for Nuclear Disarmament and Peace (CNDP).

One of the MANW’s popular programs has been a slide show titled ”Hiroshima Can Happen Here.” When plans are afoot to make many Hiroshimas happen in South Asia, we propose to carry our struggle forward. We count on the solidarity of all peace-loving forces, especially of the people of Japan who know just what a nuclear war can mean.