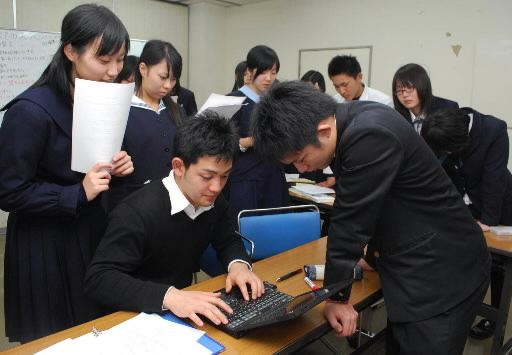 Members of the "No Nuke Network: Students of Hiroshima Against Nuclear Weapons," who have been making efforts for the cause of nuclear abolition, have collaborated with high school students in Nagasaki to create a peace declaration. In the declaration entitled "To the People of the World," the youths in the A-bombed cities of Hiroshima and Nagasaki pledge that they will join hands for the abolition of nuclear weapons by seeking peace not through military force but through dialogue. What were the students' thoughts behind the statement? The Chugoku Shimbun reviews the three days of discussion involved in drafting the declaration.

Young people reflect on their role

More than ten high school students gathered around a laptop computer, exchanging ideas with serious expressions. It was the last Sunday of November, in the city of Nagasaki, and the voice of one student finally exclaimed. "Yes! We've done it!" With this remark, the tension dissolved and the youths burst into smiles and applause.

The moment marked the completion of the peace declaration created by the students of Hiroshima and Nagasaki after visiting each other's cities and spending three days together in discussion.

In the process of writing the statement, the students spent time reflecting on the role of young people in conveying the horror of the atomic bombings as well as their understanding of history. They also engaged in serious discussions over every aspect of the declaration, including detailed consideration of the wording.

"This is the horror of nuclear weapons." The declaration begins with the depiction that "your loved ones" could be killed "in an instant" by a nuclear weapon. The purpose of this passage is to encourage people to imagine such a possibility and see the horror that nuclear arms can wreak in very personal terms. Yuri Nakagaki, 17, a second-year student at Hiroshima Jogakuin High School, explained the intent of this opening paragraph, saying, "We wanted the text to evoke a sense of crisis for people who are indifferent to the issue."

At the same time, the students seem to hold some uncertainty in their hearts, feeling that because they are not A-bomb survivors, they can never really understand their true suffering. Yuji Kanemori, 17, a second-year student at Hiroshima Gakuin High School, confided that such concerns flash through his mind. "I wonder if we speak about the hardship suffered by A-bomb survivors too lightly," he said.

Tomoko Takamoto, 17, a second-year student at Hiroshima Jogakuin High School shares this feeling. "We'll never really understand what the A-bomb survivors have had to endure," she said. Nevertheless, she is standing tall, rather than standing still, adding, "In Hiroshima and Nagasaki, we have a lot of opportunity to learn about the atomic bombings. It's our duty, then, to convey this issue to others."

Wartime aggression and the atomic bombings

How the students faced up to the past proved to be a crucial aspect to making the declaration. Believing that, "if we wish to have the damage wrought by the atomic bombing taken into the hearts of others, we must meet Japan's wartime aggression head-on," the students incorporated the words "We must learn about history rightly" into their statement.

However, Richi Miyake, 16, a first-year student at Shudo High School, posed the question: "Is there any 'right history'?" Raising the question based on his experience of attending elementary school in the United States, he said, "When I went to school there, I learned that Japan made a surprise attack at Pearl Harbor and engaged in a number of atrocities in Asia. We were told that the United States had no choice but to resort to the atomic bombings to force Japan to stop such acts."

"It's true that Japan, in the past, tormented the people of Asia," said Yuki Okada, 16, a first-year student at Shudo High School. Describing his experience of a peace education program in South Korea, he argued, "Without facing up to these facts, the damage from the atomic bombings will never be recognized by others."

Richi Miyake responded by saying, "Everyone wants to lay claim to their own version of history. The sentiments of the parties involved have to be carefully untangled." After an animated discussion among all the students present, the idea evolved to "We must learn about history rightly, from many angles." They also added the phrase, "We must listen to the voices of others and acknowledge their feelings."

The declaration thus expresses the sincere thoughts of Japanese youths who wish to acknowledge the sentiments of the people in the countries and regions with which Japan shares its history.

Peace Declaration by students in Hiroshima and Nagasaki: "To the People of the World"

Please imagine:
Because of a single atomic bomb,
your loved ones, by your side just moments ago,
are incinerated in an instant, dying in agony.
This is the horror of nuclear weapons.

We must face the current state of the world squarely.
We must learn about history rightly, from many angles.
We must listen to the voices of others and acknowledge their feelings.

And for the future,
we hope to create peace, not through weapons and military force, but through dialogue and trust.
We want to overcome religious, racial and language barriers to join hands with people around the world and take action.
Please think about what you can do now to help bring about peace in the world.

For humanity,
for the world,
for the earth,
and for the future.

What can you do now?
We are humble, but not powerless.
We, junior high and senior high school students in Hiroshima and Nagasaki, pledge to unite our aspiration for the elimination of nuclear weapons and work together in pursuit of the realization of peace in the world.

Yuji Kanemori, second-year student at Hiroshima Gakuin High School
I have learned that "peace" must be understood from a variety of angles. Personally, I think that if more people would take the time to reflect on the nature of peace, the world would become a little more peaceful. The biggest threat to peace is indifference. I'll be happy if this message from students who live in the A-bombed cities serves as a stimulus for thinking about peace.

Rise Kimoto, second-year student at Notre Dame Seishin High School
It's natural for us to call for the elimination of nuclear weapons. But I suspect that there are adults who are unaware of this message. As we have heard the accounts of A-bomb survivors and understand the misery of the atomic bombing, we must communicate these facts to people across Japan and the world.

Tomoko Takamoto, second-year student at Hiroshima Jogakuin High School
Peace is a fragile thing and war is not something found only in films. A great number of people perished or suffered hardship some 60 years ago. To create a better future, we must understand how important it is to learn such facts. I believe that appealing for peace is the mission of all people, regardless of age or place of birth, whether they were born in an A-bombed city or not.

Yuri Nakagaki, second-year student at Hiroshima Jogakuin High School
As A-bomb survivors are growing older, junior high and high school students in Hiroshima and Nagasaki are determined to do what we can to help. I wouldn't go so far as to say that this is a "mission" for me, but I think that reflecting, learning, and acting in regard to this issue, in order to motivate others to support nuclear abolition, is the role of young people.

Takuya Nakatsuma, second-year student at Hiroshima Gakuin High School
When I was a child, I heard about life after the atomic bombing from my grandparents and I felt the importance of preventing war. So learning is the first step to taking action. I believe there's a lot of significance to the fact that students of Hiroshima and Nagasaki are sharing common feelings and working together to convey to the world the horror of the atomic bombings and the preciousness of peace.

The "No Nuke Network: Students of Hiroshima Against Nuclear Weapons," aiming for a world free of nuclear weapons, was launched in May of this year and began its full-fledged campaign activities on the street and at other sites in Hiroshima in August. The group's current objective is to gather a large number of paper cranes, more than 23,000 in total, which is the number of nuclear warheads in the world today, and deliver them to U.S. President Barack Obama. This objective is based on the students' hope that the president will visit Hiroshima and embrace the desire of the people of Hiroshima for the abolition of nuclear weapons.

As the group's presence has become more widely known, many paper cranes have been offered from the citizens and students of Hiroshima Prefecture and beyond who feel moved to support this effort. The circle of friendship activities among the younger generation has been growing, such as students at Atsugi High School in Atsugi City, Kanagawa Prefecture and at Kassui High School in the city of Nagasaki kicking off activities in their local areas this past November. To date, over 25,000 paper cranes have been collected.