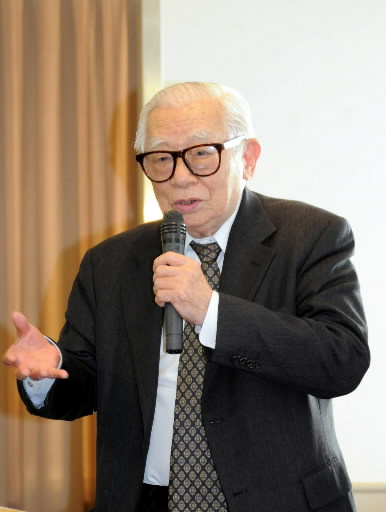 
Determined to collect and convey A-bomb accounts
In a speech given at the December 10 inaugural meeting of the group “No More Hibakusha,” Mikiso Iwasa, 82, the group’s executive director and an A-bomb survivor, said that survivors of the bombing have recovered from their dreadful ordeal, conveyed their experiences to others, and persevered in their efforts so that no more hibakusha are produced. His words are a reflection of his own life story.

When Mr. Iwasa was in first grade, he moved to Hiroshima with his family as the result of his father’s job transfer. As a boy, he held militaristic ambitions, and dreamed of dying on the battlefield. He was 16 years old when he experienced the atomic bombing while in the yard of his house in Fujimi-cho, 1.2 kilometers from the hypocenter. The blast felt like he had been struck on the head with a baseball bat. Miraculously, he suffered only minor injury.

His mother, though, was trapped under their collapsed house. He spotted her, only a meter away, and sought to free her from the wreckage. But as he was tearing at the ground with his bleeding hands, fire closed in. His mother told him to run and she began chanting the Heart Sutra. In tears, Mr. Iwasa turned away, unable to save her. Two days later, her body was recovered from the rubble. “Her body looked like a burnt mannequin coated with coal tar,” he recalled. His younger sister, who was a first-year student at a girl’s high school and assigned to help dismantle buildings that day as part of the war effort, was never found. As his father had already passed away from illness in May of that year, Mr. Iwasa was left an orphan.

After enduring the atomic bombing and the remainder of the war, he came to feel a new will to live. Supported by his aunt, he went on to university and studied the history of political thought in the United Kingdom. He eventually became dean of the School of Law at Kanazawa University, located in Ishikawa Prefecture. Apart from his duties as dean, he took an active role in forming a group of A-bomb survivors in the prefecture and seeing that they received medical checkups. After his retirement, Mr. Iwasa moved with his wife Hiroko to the city of Funabashi in Chiba Prefecture, near Tokyo, in order to promote the A-bomb survivors’ movement with the Japan Confederation of A-and H-Bomb Sufferers Organizations.

“The most urgent task now is to convey the feelings of the survivors to the hearts of peace-loving people and have them take up the survivor’s spirit,” he said. The new group he heads aims to establish a peace information center in three years to collect A-bomb accounts and records of the A-bomb survivors’ movement and convey this information to the rest of the world.

“I’m not the type of person who broods over things,” he said. “Thanks to my mother, I was born with an easygoing nature.” With his innate vitality, Mr. Iwasa is committing himself to this significant challenge.