IPPNW World Congress to open in Hiroshima on August 24 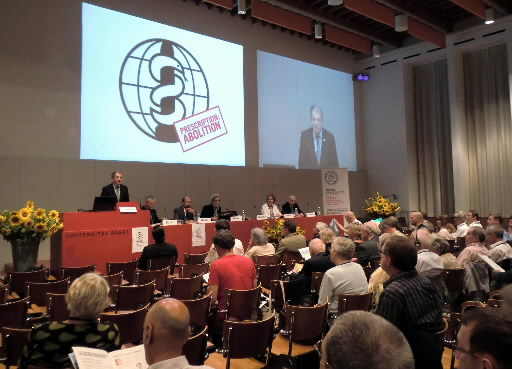 Organization returns to its roots in A-bombed city
by Kentaro Yamamoto, Staff Writer

The World Congress of the International Physicians for the Prevention of Nuclear War (IPPNW) will be held in Hiroshima over a period of three days in August, from August 24 to 26. It will be the first IPPNW World Congress held in the A-bombed city in 23 years. To heighten the significance of the gathering, the Japan Chapter of IPPNW, whose secretariat is located in Nishi Ward, Hiroshima, will incorporate activities to hand down the experiences of the atomic bombing. In the wake of the accident at the Fukushima No. 1 (Daiichi) nuclear power station, there is growing interest among the participants from abroad in issues involving the push to end Japan’s reliance on nuclear energy and the provision of medical care to those who have been exposed to radiation.


Focus on nuclear abolition, new attention on nuclear energy
About 500 physicians from Japan and overseas will gather at the International Conference Center Hiroshima, located in the heart of the city, to attend the World Congress, commemorating its 20th anniversary this year. During the event, six plenary sessions will feature participants sharing their views on such issues as the progress of the organization’s campaign to promote a nuclear weapons convention (NWC) among the nuclear weapon states and current conditions involving global security.

On August 25, such presenters as Hiroo Dohi, the director of the Japanese Red Cross Chugoku-Shikoku Block Blood Center, will speak about the effects on human health caused by the radiation released in the atomic bombing.

This year’s World Congress in Hiroshima will be the second, with the first conference held in 1989. The Hiroshima Prefectural Medical Association, which serves as the secretariat for IPPNW’s Japan chapter, plans to hold a Youth Summit on August 25, where young people from Japan and abroad will discuss the issue of nuclear weapons, as well as a symposium of physicians who are second-generation A-bomb survivors, scheduled for the same day.


Effort has lost steam
Before his death in May, Shizuteru Usui, the late president of the Hiroshima Prefectural Medical Association had declared that the aims of the World Congress involved “conveying the consequences of the atomic bombing to the physicians of the world and fueling momentum for the elimination of nuclear weapons.” It is expected that his successor, who will be elected in the near future, will maintain the same vision for the event.

Against this backdrop are concerns about the current conditions of the IPPNW effort, which has lost steam over the years and has seen its mission evolve. Since its founding, the IPPNW membership has been telling the world that “Nuclear weapons and human beings cannot co-exist.” However, the current membership of roughly 100,000 from 62 countries is a significant decline from the 1980s, when there were about 200,000 members from 85 nations.

IPPNW’s activities have also expanded to include such issues as the elimination of land mines and a ban on the export of weapons. Katsuko Kataoka, the secretary general of JPPNW, the Japan chapter, stated, “Since the end of the Cold War, the possibility of nuclear warfare has waned. Because of this, the perspective has moved away from the abolition of nuclear weapons.” With the World Congress being staged in Hiroshima, the organizers hope to “return to the roots” of the group.

Nevertheless, physicians coming from overseas seem focused on issues involving the crippled nuclear plant. After strong encouragement from abroad, the Japan chapter hastily added a plenary session that the organizers had not originally planned, for the gathering’s final day. The session is entitled “Nuclear Energy: Health and Environmental Implications and Non-proliferation Issue.” Participants at this plenary will also learn about the accident at the Fukushima power station and the medical assistance being provided to those affected by the disaster.


Members differ on IPPNW stance
Last summer, IPPNW sent a statement of protest to Naoto Kan, then prime minister of Japan, in which the organization criticized the response of the central government to the disaster at the nuclear plant. Some European chapters of IPPNW have urged the Japan chapter to “convey the stance of seeking an end to Japan’s reliance on nuclear energy at the World Congress in Hiroshima.”

The Japan chapter appears to have somewhat different considerations, however. Dr. Kataoka, the chapter’s secretary general, said, “We don’t wish to inspire anti-government activities that are critical of the nation’s energy policy.” The Japan chapter is determined to maintain the IPPNW position of emphasizing the idea of medical assistance and research to support victims of radiation exposure.

On the last day of the gathering, the organizers expect the World Congress to adopt a declaration. In what way can the statement incorporate the A-bomb experiences and the appeal for nuclear abolition, as well as the issue of the nuclear disaster in Fukushima? To draft an effective declaration, and steer the commemorative event to success, the Japan chapter must display capable leadership.

International Physicians for the Prevention of Nuclear War (IPPNW)
IPPNW was established in 1980 largely by physicians from the United States and the Soviet Union, nuclear weapons states embroiled in the Cold War. The organization’s founding principle is to help prevent nuclear war by disseminating the knowledge held by physicians, such as the effects of radiation exposure on the human body. IPPNW was awarded the Nobel Peace Prize in 1985. Since 2000, the IPPNW World Congress has been held every two years.