Editorial: Public must push back over arrival of Osprey aircraft to Iwakuni 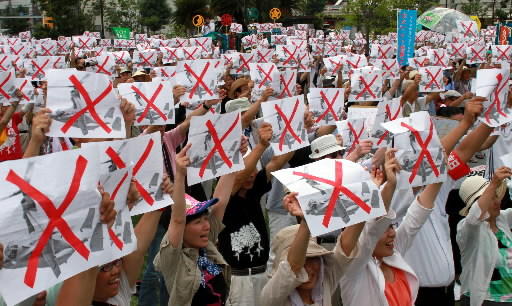 How is it possible for the governments of Japan and the United States to dismiss the public’s rising indignation and distress?

On July 20, Japan’s Ministry of Defense informed the Iwakuni city government and the Yamaguchi prefectural government that the MV22 Osprey tilt-rotor transport aircraft will be landing at the U.S. Marine Corps Air Station Iwakuni on July 23. The Osprey is a U.S. Marine Corps aircraft and has come under scrutiny over safety concerns.

The fleet of Osprey are coming to Iwakuni to conduct test flights before being deployed at the Marine Corps Air Station Futenma in Okinawa Prefecture. Though local authorities in Yamaguchi Prefecture have repeatedly called for the landing to be canceled, their appeals have apparently been ignored. It is only natural that the mayor and governor would react sharply to this announcement.

It is not too late for the Japanese government to urge the U.S. administration to refrain from pushing forward with the Osprey landing. Assuming the aircraft are indeed brought into the Iwakuni air station, the government must ensure that they remain grounded, confined to the base. This is the course government officials should pursue.

At this juncture, the Osprey is not an issue limited to Okinawa and Iwakuni.

Concern over the Osprey is symbolized by the fact that the Association of National Governors has adopted an urgent resolution expressing unanimous opposition to the landing at Iwakuni. After deploying the aircraft at the Futenma Air Station, the U.S. military plans to conduct low-altitude flight drills nationwide. Even governors who normally have little contact with U.S. forces are surely sharing in the deep concern of officials in Okinawa and Iwakuni.

In the past, the port calls made by the USS Enterprise, a nuclear-powered aircraft carrier, in Sasebo, Nagasaki Prefecture, and the deployment of the USS Midway, another aircraft carrier, in Yokosuka, Kanagawa Prefecture, stirred strong opposition throughout the nation. The situation involving the Osprey is a challenge of the same order and must be met by a nationwide response.

Despite the seriousness of the situation, it appears Prime Minister Yoshihiko Noda has done nothing to address the public’s concern. This week the prime minister said that the planned deployment is part of the U.S. government’s defense policy, which the Japanese government has no say in. Evidently, Mr. Noda thinks very little of public opinion in Japan.

Doubts over the safety of the Osprey have continued to grow. Outside Japan, in addition to crashes suffered by the aircraft in April and June, this month another Osprey was forced to make an emergency landing when a problem developed in the fuselage.

Furthermore, an expert at an institute with ties to the U.S. Department of Defense has warned that the Osprey is susceptible to malfunction when faced with turbulence or carrying out difficult maneuvers. It has become apparent that the fuselage is indeed a cause of concern.

The Japanese government will seek to confirm the safety of the aircraft after studying the reports on the crash investigations. Until then, according to the Ministry of Defense, the government will call for the test flights from Iwakuni to be postponed. On the other hand, the government has said that it will permit maintenance to be carried out on the engines before the aircraft’s safety is verified.

One can only assume that declaring the aircraft fit to fly has been a fait accompli from the very beginning. But if the Japanese side simply follows the U.S. military’s unilateral “safety declaration,” the process of ensuring the actual safety of the aircraft will be made pointless. The Japanese side must at least hear the independent views of experts who have pointed to dangers involving the aircraft.

The U.S. stance is also disconcerting. Domestically, U.S. authorities give ample consideration to local residents when concerns are voiced over the safety and noise of military aircraft. Flight drills at an air base in the state of New Mexico were reportedly suspended after area residents staged a protest.

Japan can never be considered an “equal partner” of the United States if the U.S. side turns a deaf ear to the concerns being voiced by Japanese residents.

Even Japanese officials who are committed to U.S. relations have begun to raise objections. In particular, Seiji Maehara, the policy chief of the Democratic Party of Japan and a man who prides himself on his expertise of security issues involving the United States, publicly criticized the prime minister, urging him to renegotiate the Osprey plan with the U.S. side. “If Japan is unable to speak its mind to the United States,” Mr. Maehara said, “the Japan-U.S. alliance will turn sour.” His comment hit the mark.

The governments of Japan and the United States must engage in this issue sincerely and seek a fundamental review of the deployment plan. Compared to conventional transport helicopters, the Osprey is a significant advance with regard to speed and cruising distance. This being the case, the Osprey could still carry out its role if deployed to Guam, a U.S. territory.

On July 23, the eyes of Japan will be fixed on Iwakuni. The Iwakuni city government and the Yamaguchi prefectural government should make no easy concessions. What is needed, rather, is the determination to continue saying “no.”