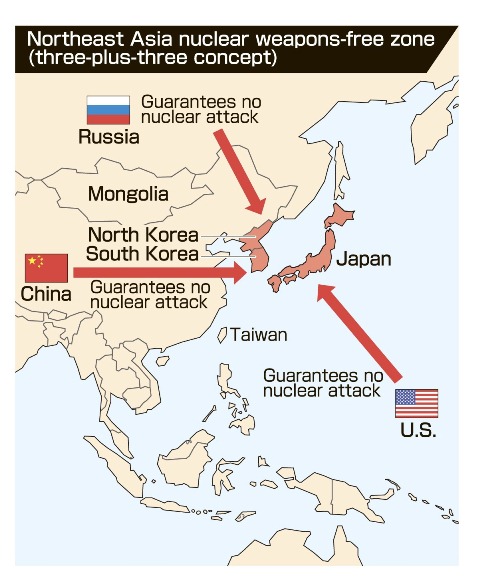 Ignoring calls by other countries to exercise restraint, North Korea has conducted what was effectively the launch of a missile. The efforts of the international community to pressure North Korea to abandon its development of nuclear weapons have come to an impasse. Meanwhile a comprehensive approach to resolving the issue within a larger framework has attracted attention. An international workshop to discuss the possibility of such an approach was held in Nagasaki on December 7 and 8. I attended the event, which was sponsored by Nagasaki University’s Research Center for Nuclear Weapons Abolition and other organizations. Through discussions by about 40 experts from Japan and abroad, the workshop examined the challenge of the denuclearization of Northeast Asia and the prospects for success.

A comprehensive approach was proposed in the fall of 2011 by Morton Halperin, a former high-ranking U.S. government official. His method aims to resolve issues related to North Korea through a treaty on peace and security that address the issues comprehensively.

His proposal revolves around North Korea, the U.S., Japan and South Korea as well as China and Russia, but the basic concept differs greatly from the six-party talks that have been held thus far.

It is particularly important to create a situation in which North Korea feels that its security is assured. In order to do that, the first elements of Mr. Halperin’s comprehensive treaty are termination of the state of war on the Korean peninsula, which North Korea desires most of all, and normalization of relations with neighboring nations.

The proposed treaty incorporates six elements, including the creation of a permanent council on security, a mutual declaration of no hostile intent and a nuclear weapons-free zone.

Indeed, while the U.S. and South Korea want North Korea to first abandon its nuclear weapons, North Korea asserts that an end to the state of war on the Korean peninsula must precede that. Thus the two sides remain far apart and have fallen into a state of mutual distrust.

At a public symposium held in conjunction with the workshop, recent changes in North Korea were cited.

According to Yi Kiho, director of the Center for Peace and Public Integrity at Hanshin University in South Korea, North Korea is interested in meeting with Henry Kissinger, former U.S. Secretary of State. As a special envoy, Kissinger worked hard to bring about the stunning restoration of diplomatic ties between the U.S. and China during the administration of President Richard Nixon. North Korea is perhaps interested in learning the details behind that development.

“There is an opportunity to work toward resolution while engaging in a dialogue,” Mr. Yi said. He stressed the importance of expanding exchanges with North Korea, including at the grass-roots level.

Changes in the way the Japanese government addresses the situation are also needed. In the final edition of its white paper on nuclear disarmament and non-proliferation negotiations published in 2011, the Foreign Ministry referred to a nuclear weapons-free zone in Northeast Asia for the first time. But the paper also said, “We believe that efforts must first be made to resolve the issue of North Korea’s nuclear weapons.” This is the same stance the government has maintained in recent years.

If North Korea becomes a nuclear-missile state, the situation in Northeast Asia will undoubtedly deteriorate. There is concern in the international community about a domino effect that will lead South Korea and Japan to seek to acquire nuclear weapons as well.

In fact, some politicians in both Japan and South Korea have proclaimed the need to acquire nuclear weapons capability in order to counter the threat posed by North Korea. Japan is proceeding with the reprocessing of spent nuclear fuel from nuclear power plants as national policy. Because this entails the possession of large quantities of plutonium, which can be diverted to military use, Japan is suspected of intending to acquire nuclear capability.

There are other issues as well, including close examination of the proposed treaty, the abduction of Japanese citizens by North Korea and its border issues with China and South Korea.

As an expert in foreign relations and security policy, Mr. Halperin served as a high-level official in the Johnson, Nixon and Clinton administrations and was involved in practical politics. For this reason, his proposal has generated a great deal of interest. Zhang Guihong, executive director of the Center for United Nations Studies at Fudan University in China, who attended the workshop, also expressed his support for a comprehensive approach.

“Even if the cost is high, we have to try at least once more,” Mr. Halperin said. He stressed the need for Japan in particular to take positive action in order to achieve a breakthrough.

If northeast Asia can be made a nuclear-free zone as proposed, this will not only bring us closer to a world without nuclear weapons, it will also make the “nuclear umbrella” of the U.S. unnecessary and lessen the military implications of the Japan-U.S. alliance. At the same time it will serve to narrow the gap in perception between Hiroshima and Nagasaki on one side and the Japanese government on the other, and the message of the A-bombed cities will take on greater weight internationally.

In that sense as well, the role of Hiroshima and Nagasaki will be vitally important. This time Nagasaki took the initiative, but a similar international symposium to explore the possibility of a nuclear weapons-free northeast Asia was held in Hiroshima in July under the co-sponsorship of the Hiroshima Peace Institute at Hiroshima City University and the Chugoku Shimbun. Hiroshima must work more closely with Nagasaki and first of all spur the Japanese government to action.

The keynote speech delivered by Mr. Halperin at the international workshop is here.

Concept of a nuclear weapons-free zone in Northeast Asia
This concept involves the creation of a nuclear weapons-free zone in northeast Asia, where tensions have persisted since the end of the Cold War. Since the 1990s several proposals have been made in an effort to prevent nuclear proliferation and allow Japan to end its reliance on the “nuclear umbrella” of the U.S., thus also contributing to the elimination of nuclear weapons. One of these proposals, the “three-plus-three” concept, would ban the development and possession of nuclear weapons by Japan, South Korea and North Korea as well as the bringing of nuclear weapons into these nations. At the same time the U.S., Russia and China, the three nuclear nations in the vicinity, would pledge not to attack or threaten to attack the other three nations with nuclear weapons. This concept was advanced by Hiromichi Umebayashi, former president of the non-profit organization Peace Depot and director of the Research Center for Nuclear Weapons Abolition, and others in 1996. Morton Halperin’s comprehensive approach is based on the three-plus-three concept.