In the Days Before Electricity: Interview with Artist Mitsumasa Anno 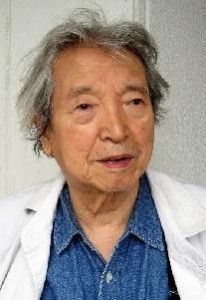 Young girls in traditional outfits planting rice. An elementary school building made of wood. A steam locomotive. Pictures depicting such nostalgic scenes are found in the eighth book of the popular series “Tabi no ehon” (“Journey Book”) by artist and picture book author Mitsumasa Anno, 87. In this book, he features images of Japan in the days before electricity, a response to the March 2011 accident at the Fukushima No. 1 (Daiichi) nuclear power plant. Since that disaster, the basic underpinnings of Japanese society have been called into question. The Chugoku Shimbun interviewed Mr. Anno, who was born in Tsuwano, Shimane Prefecture, on his perspective of present-day Japan.


Your pictures have a nostalgic air.
If I draw pictures of modern Japan, they will look old in as little as three years, so I decided to create images of scenes from my childhood. Some households didn’t have electricity back then, but people weren’t unhappy. Society today depends too much on electricity. I myself came to realize that fact only after the accident at the nuclear power plant.

After the nuclear accident, there rose a trend to reconsider this lifestyle, but it seems people have forgotten already.
We can return to the time when we didn’t have nuclear power plants if we choose to do so. Young people and a lot of others say it’s impossible, but it can be done. What we would have to do is conserve electricity and put up with a certain degree of inconvenience. We don’t need automatic doors, do we?

Some argue that if we don’t resume operations at our nuclear facilities, our economy won’t be able to keep pace with the economies of the world.
It will lag behind for some time, that’s true. But restarting the plants will raise the risk of another accident, and more and more spent fuel will be produced. It was a mistake to build nuclear power stations in the first place. The fact that there was no method to dispose of the waste was taken lightly; people just assumed that future generations would manage to deal with it somehow.

With a disposal method still nowhere in sight, people are talking about restarting and exporting nuclear power plants. I can’t understand how they can discuss such things. Even if none of us take responsibility and the whole human race perishes, the radioactive waste will linger for a long, long time.

Still, the Japanese government is seeking to restart the nation’s nuclear reactors and export our nuclear technology.
They haven’t even been able to bring the stricken plant under control, so they shouldn’t be trying to sell this technology to India and other countries. I can’t understand what they’re thinking with regard to responsibility. At one time, there were suggestions like burying the radiation-contaminated debris from the accident and the nuclear waste deep under the ground in Kagoshima Prefecture or in Mongolia. I wonder what path they think they would take to haul this material.

What do you suppose is the thinking behind this?
Torahiko Terada [a physicist and author] wrote that politicians don’t understand science, and I think he’s right. This isn’t much different from the time of World War II, when people believed that a divine wind would blow to protect Japan. They say that “experts know best,” but scientists have to make a living, too. So it happens that the economy is given higher priority.

In this light, Germany should be admired for its decision to break away from the use of nuclear energy. Perhaps German politicians and the public have a deeper understanding of science. The Japanese people must be careful not to create a big mess. Seen from the perspective of science, many odd things are occurring. We should view those things with a grain of salt.

It sounds like something dangerous is going to occur.
I can’t understand why a group of politicians paid a visit to Yasukuni Shrine [where the war dead, including war criminals, are enshrined]. Why do they provoke China and South Korea when Japan is already at odds with these countries over the Senkaku and Takeshima Islands? They don’t have to visit the shrine on a specific day, and they could offer prayers from their homes in the direction of the shrine. We all share the feeling of wanting to console the souls of the war dead.

It’s a precarious situation, I think, to have more and more politicians without a firsthand knowledge of war. At the same time, there’s the risk that nuclear power plants could be a target for attacks. For countries with nuclear plants, terrorism and guerrillas present more danger than modern weaponry.

In its quest for economic development, Japan has produced very different scenes from the images you created for your book. What do you think about this?
Such scenes are made when human beings are added to the wilderness where creatures like butterflies and snakes live. In the film “The Naked Island,” directed by Kaneto Shindo, the actress Nobuko Otowa went up a hill shouldering things on a pole. This is how people produce those scenes.

I once saw terraced rice paddies on a steep hill, and on top was a paddy with sides that were less than 30 centimeters. Only three seedlings could be planted there. I was impressed, wondering who made it and maintained it.

What path should we take now?
Why don’t we go back to square one and treasure our lives in nature, though it may be more inconvenient?

Mitsumasa Anno
Born in Shimane Prefecture, Mitsumasa Anno has published many books in his career, including Topsy-Turvies: Pictures to Stretch the Imagination, Book of ABCs: A Twisted Alphabet, and Picture Book: Improviser. The Tabi no ehon series (Journey Book), a signature work, has focused on such regions as Europe, the United States, and China. Also known as an author and essayist, Mr. Anno has won many national and international prizes including the Hans Christian Andersen Award and the Kikuchi Kan Prize. He was named a Person of Cultural Merit last year. A museum dedicated to his work, the Anno Art Museum, is located in his hometown of Tsuwano.