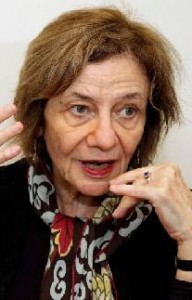 Eva Hoffman, 68, whose parents survived the Nazi Holocaust, visited Hiroshima from the U.K., where she now resides. As a writer and a child of Holocaust survivors, she has reflected on ways to transmit the survivors’ experiences to future generations. The Chugoku Shimbun interviewed Ms. Hoffman on how memory should be kept of past experiences, as a part of human history, and conveyed to future generations. This is the very challenge Hiroshima now faces.

In your books, you’ve written about your struggles as a second-generation survivor of the Holocaust.
My parents were Jewish, and lived in Poland. They were hidden in a barn by farmers, and managed to survive the war. Afterward, they moved to Canada to escape anti-Semitism. Throughout their lives, they had to endure the psychological trauma they suffered from their harsh experiences.

I’m one of the second generation whose parents suffered like mine. I’ve tried to understand the Holocaust, as if I had experienced it myself, and I’ve worked to convey this experience. But I don’t have my parents’ memories. It took years for me to accept that I had no real idea of what it was like.

The second generation can be a bit more detached when looking back at the past, and can grasp larger pictures. We can seek to fully understand the survivors’ personal memories and place them within the broader context of history. We can achieve a kind of transmission of the trauma our parents suffered and hand down their memories of the past. As a writer, this is what I try to do through literature.

I understand that this is your first visit to Hiroshima. What are your impressions?
I met Keiko Ogura, a survivor of the atomic bombing. She told me about her experiences in America. She was talking to people about the bombing and they attacked her, saying that the atomic bombs were necessary to end the war. As I once lived in America, I was shocked to hear this, but I was also moved to learn that she still continued to share her experience.

I sense that, compared to the Holocaust, there are many A-bomb survivors who haven’t talked about their experiences. I would like the second-generation survivors to listen more to their testimonies and discover their stories.

You stress the importance of honest dialogue involving the history of victims and aggressors.
For the second generation in Germany, it is a difficult task because they are morally obligated to criticize their parents and grandparents. Nevertheless, German citizens and Jewish people have continued a dialogue. On the other hand, the situation in Poland is different.

The Poles were victims of World War II, but at the same time, the Jewish people did not trust them since they could be informers for the Nazis. During the Cold War, they were unable to pursue a dialogue. During the last few years, though, things have changed considerably to build better mutual understanding.

Is dialogue important for Hiroshima and Nagasaki, too?
Definitely. But the situation for Hiroshima and Nagasaki is more complicated. In the case of the Holocaust, the victims and their aggressors can be clearly identified. While those who suffered the bombings are victims, Japan is also accused of responsibility for the war. If they speak both as aggressors and as victims, then the survivors have the full moral authority to speak. The conscience of the survivors will move the listener.

Honest dialogue may not be easy for Japan and America. The aggressors must refrain from holding a one-sided political view of history and acknowledge their responsibility for what was done in the past. The victims must look squarely at their hostility toward the aggressors and recognize they, too, face the danger of temptation when it comes to using the terrible past for their political gain.

This is a very difficult process for both sides, but we do need to say “who did it?” and “what happened.” If we do that, then we can engage in mutual dialogue. This is something I would like the younger generations of Japan and America to pursue.

Eva Hoffman
Born in Krakow, Poland in 1945. Emigrated to Canada at the age of 13 with her family. Earned a Ph.D. from Harvard University in the United States. Worked at The New York Times from 1979-1990 as a book review editor. As a writer, published After Such Knowledge: Memory, History, and the Legacy of the Holocaust, which has been translated into Japanese and published by Misuzu Shobo, and other books.