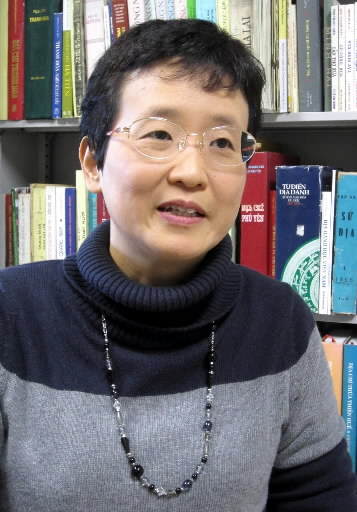 Despite no end in sight to the clean-up of the accident at the Fukushima No. 1 (Daiichi) nuclear power plant, Japan’s public and private sectors are pushing the sale of the nation’s nuclear technology to other countries, including Vietnam, with whom Japan established diplomatic relations 40 years ago this year. But information is controlled in Vietnam, and it is difficult for citizens to speak out. The Chugoku Shimbun interviewed Masako Ito, 49, an associate professor at Kyoto University and expert on the situation in Vietnam, about this issue. The following are excerpts from that interview.

Last year you visited the site in Vietnam where the plant is to be built by Japan.
The site is in the village of Tay Anh in south central Vietnam. Ninh Thuan Province, where the village is located, is cash-poor in contrast to the neighboring province, which succeeded in developing a popular resort. There is little flat land in the coastal area, and I heard that the villagers will be forcibly relocated in order to acquire the land for the power plant. Also, part of the coast is a breeding ground for green sea turtles, which are classified as endangered, so that is a concern.

How big will the nuclear power plant be?
About 1 trillion yen will be spent to build two 1,000 megawatt reactors. Nguyen Tan Dung, prime minister of Vietnam, has stressed his belief that the technology Japan will export to Vietnam will be fail-safe, and the government has broadcast a publicity video for Japanese nuclear technology on television. A total of 14 reactors are slated to be built by 2030. It’s depressing.

What has been the reaction of the local population?
Some have basically given up, feeling the government has already made up its mind. Others take an optimistic viewpoint, believing the plant will be safe. The villagers, who eke out a living through fishing, don’t have access to the Internet, and they don’t get any information on the nuclear power plant. They are going to be relocated to a site less than 2 kilometers away. Signs have been erected promoting it as a “dream town.”

Is there an opposition movement?
The Communist Party limits freedom of speech and assembly and has apparently clamped down on any opposition. And newspapers and television can’t freely disseminate information that casts the government in a bad light. Under the Doi Moi Policy, Vietnam’s economy was liberalized, but there has been very little political reform.

Meanwhile some intellectuals in the cities who learned of the situation in Fukushima through the Internet are increasingly skeptical about the need for the power plant and its safety, and they have written about their doubts on blogs.

Apparently there were also protests against Japan.
Last year, a famous blogger named Nguyen Xuan Dien called for a petition drive in protest against Japan. More than 600 people supported it, but the protest was obstructed, and he was forced to remove the call for a petition drive from his blog. Nevertheless, he sent a letter of protest to the Japanese government, but it has been ignored.

There has been a crackdown on the movement by intellectuals, and the impoverished residents of the village where the power plant is to be built can’t even get any information on it. So there is no opposition movement that is visible to other countries. I think it is sinful to overlook the restrictions on freedom of speech and proceed with the export of nuclear technology.

Why is Vietnam promoting nuclear power?
Vietnam barely has enough electricity to meet its needs, and the government says it wants to nuclear energy to provide 8 percent of the nation’s energy. If that’s the case, they could make use of their abundant water resources instead. They have coal and oil fields too. And wind power holds promise in the coastal areas. In fact, the government of Germany is providing official development assistance.

There is speculation that the ruling class in Vietnam is focusing on the nuclear technology that Japan is selling because they want to line their pockets through pork-barrel politics. The government doesn’t say so officially, but they may also want to acquire nuclear technology as a counterbalance to China.

How are the plans proceeding?
Bureaucrats say they have no idea of the costs involved in building a nuclear power plant designed by Russia, which predates the Japanese plan, and it is likely to be delayed. There is also a lack of engineers in Vietnam. Construction on the plant designed by Japan is scheduled to start in a few years, but that is also iffy.

The Japan Atomic Power Company (JAPC) got the contract to do the field survey prior to construction of the plant. The Japanese government has sunk 2 billion yen in public funds into the field survey, which should ordinarily cost only several hundred million yen, and they supplemented this with 500 million yen from the budget for post-disaster reconstruction. It seems as if they want to prop up JAPC.

Prime Minister Shinzo Abe’s first trip abroad after forming his administration was to Vietnam in January.
I presume it was part of an effort to build a coalition against China, but when he went to Vietnam he referred to it as “a nation with the same principles” as Japan despite the fact that Vietnam suppresses freedom of speech. I get the feeling there’s a connection with the administration’s effort to enact a state secrecy law.

The philosophy of the Vietnamese government is to “put a lid on the past and look to the future.” This has presumably been promoted for economic benefit. But if Japan is a true friend, before exporting nuclear technology there, it should advise Vietnam to pursue political reform.

Masako Ito
Born in Asa Minami Ward, Hiroshima. Earned a doctorate from the Graduate School of Arts and Sciences at the University of Tokyo. After serving as an associate professor at Daito Bunka University, assumed her current professorship in modern Vietnamese history at the Graduate School of Asian and African Studies at Kyoto University in 2006. Writings include “Senso kioku no seijigaku: kankokugun ni yoru betonamujin senji gyakusatsu mondai to wakai e no michi” (The Political Science of Wartime Memory: The Path to Rapprochement Over Wartime Atrocities Against the Vietnamese by the South Korean Military) and “Politics of Ethnic Classification in Vietnam” (Trans Pacific Press).