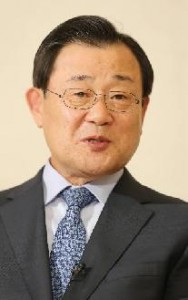 Lee Byung-kee, who became South Korean ambassador to Japan in June, visited Hiroshima on December 2 and agreed to be interviewed by the Chugoku Shimbun. The ambassador, 66, touched on perceptions of history and other issues related to the current chilly relations between Japan and South Korea while stressing that ties are strengthening in areas other than politics. Mr. Lee said he hoped Hiroshima, which was a stop for the historic Joseon diplomatic missions to Japan, would contribute further to the building of peace and prosperity. The following is a summary of the ambassador’s comments.

It’s true that certain aspects of relations between South Korea and Japan are troubled these days. Relations between the two countries have gone through cycles of progress and stalemate, but viewed over the long term they have steadily progressed. This is particularly evident in the areas of the economy and culture. Trade between South Korea and Japan in 2012 amounted to $103.2 billion. Japan is South Korea’s No. 2 trading partner, and South Korea is Japan’s No. 3 trading partner.

Since co-hosting soccer’s World Cup in 2002, there has been a Korean boom in Japan, and there’s a Japan boom in South Korea as well. Six of the 10 most popular manga in South Korea are Japanese. And, at 30 percent, Japanese literature represents the greatest portion of the foreign literature translated into Korean.

Japan and South Korea share the same values when it comes to democracy, the market economy and human rights, and the two countries, which are both members of the Organisation for Economic Co-operation and Development, must work to eliminate unstable elements from northeast Asia. In fact, at the United Nations and in other international arenas, South Korea and Japan are actively working together to address issues such as climate change, the environment, assistance to developing nations and the problem of low birth rates and aging populations.

Problem of perceptions of history

In order for both nations to carve out a path to a new era, issues of past history must be overcome. I would like the Japanese government and the Japanese people to recognize the difference between the stances of aggressor and victim and to try to put themselves in South Korea’s place. Japan must be a leader for world peace and prosperity. In order to do that, it must first establish friendly relations with its neighbors.

I believe the Murayama and Kono statements carried promises to Japan’s neighbors and to the world. Building trust based on these statements should be the starting point of foreign relations between our two nations. In doing that, what will be important is resolution of the “comfort women” issue. There are 56 comfort women, and their average age is 87. If this issue is not resolved soon, it will be a permanent source of strain between South Korea and Japan.

Relations between South Korea and Japan are stalemated as a result of various issues, but I feel confident they will improve at some point. We must work together to get out of this situation we are mired in as soon as possible.

Through co-hosting the World Cup, Japan and South Korea forged a basis for cooperation and mutual understanding. In 2015 we will mark the 50th anniversary of the normalization of diplomatic relations between our nations. I hope that will become a new turning point in the enhancement of relations.

Exchanges between the Chugoku Region and South Korea

About 5.5 million people travel between Japan and South Korea every year, but looking just at Hiroshima, the figure is not so high. I think it would be a good idea for municipalities in Hiroshima that have connections with the historic Joseon diplomatic missions between the two nations to more actively advertise their connections to those missions, which are of interest to South Koreans as well. For example, where the missions were bound or where they stopped after calling at Shimonoseki, Yamaguchi Prefecture is not well known in South Korea. If communities associated with the missions promote this as part of their regional development, I think they can expect to attract tourists from South Korea.

The diplomatic missions also contributed to cultural exchanges between Korea’s Joseon dynasty and Japan’s Tokugawa shogunate. So I think the joint effort by South Korea and Japan to make the route of the missions a World Heritage site is really a good idea. I would like to see discussions take place between the appropriate government departments and private organizations in the two countries.

I came to Hiroshima in 1967, when I was a college student, as part of an international student conference I participated in. I’ve heard that the City of Hiroshima and the prefecture actively invite groups to hold conferences on global peace here. Hiroshima, the first city to be A-bombed, can take the lead in the global anti-war movement. I would like the people of Hiroshima to contribute even further toward building global peace and prosperity.

I’d like the government to demonstrate consideration for my many compatriots living in the Chugoku Region as well.

Born in Seoul in 1947. Graduate of the Department of International Relations at Seoul National University. In 1974 joined the Ministry of Foreign Affairs where he served in various posts including Chief of Protocol to the President in the Office of the President and Second Deputy Director of the National Security Planning Agency. Served as a visiting professor at Keio University in 1999. During a December 2 visit to Hiroshima delivered a speech at an event sponsored by the Japan-Korea Friendship Association of Hiroshima.

Kono Statement
In August 1993, Chief Cabinet Secretary Yohei Kono announced the results of a study on the issue of wartime “comfort women.” In his statement Kono acknowledged the involvement of the former Imperial Japanese Army in the recruitment of comfort women, saying, “The recruitment of the comfort women was conducted mainly by private recruiters who acted in response to the request of the military. The Government study has revealed that in many cases they were recruited against their own will, through coaxing coercion, etc., and that, at times, administrative/military personnel directly took part in the recruitments.” He offered an apology, saying, “The Government of Japan would like to take this opportunity once again to extend its sincere apologies and remorse to all those, irrespective of place of origin, who suffered immeasurable pain and incurable physical and psychological wounds as comfort women.”

Murayama Statement
The Murayama Statement was issued on August 15, 1995 by Prime Minister Tomiichi Murayama under the title “On the Occasion of the 50th Anniversary of the War’s End.” The statement clearly referred to the war as “mistaken national policy” and said “…through its colonial rule and aggression, caused tremendous damage and suffering to the people of many countries, particularly to those of Asian nations.” The prime minister also stated his desire to “express here once again my feelings of deep remorse and state my heartfelt apology.”