Interview with Lawyer Masayoshi Naito, executive board member of the Japan Association of Lawyers Against Nuclear Arms 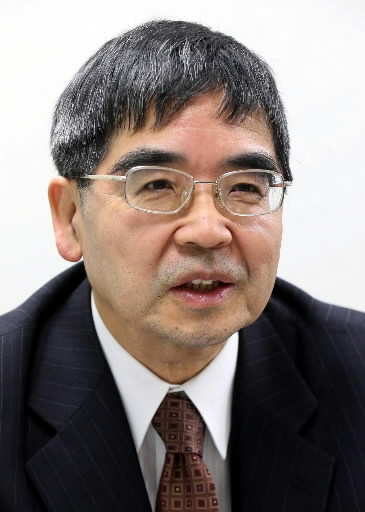 Half a century ago this December, a historic decision was handed down by the Tokyo District Court. In the so-called Shimoda case, where A-bomb survivors filed suit against the Japanese government, the court ruled that the atomic bombings were contrary to international law. What is the significance of this decision to today’s world, with its vast arsenals of nuclear weapons? The Chugoku Shimbun interviewed Masayoshi Naito, an executive board member of the Japan Association of Lawyers Against Nuclear Arms, which held a symposium in Tokyo to commemorate this ruling.

What was the historical background of this court case?
The lawsuit was filed in 1955 by Ryuichi Shimoda of Hiroshima, who was an A-bomb survivor, and families of A-bomb victims. They were represented mainly by Shoichi Okamoto, a lawyer from Osaka who also defended the accused at the Tokyo War Crimes Tribunal. As they observed the plight of the A-bomb survivors, who were suffering without any legal redress, they decided to file a lawsuit out of indignation: Can any action by the victorious nation in war be condoned?

The plaintiffs surely made tremendous efforts, but it’s surprising that a court in Japan would make a ruling on the legal responsibility for using the atomic bombs.
There was little conception of humanity in international law back then. Even today, there is no law banning the use of nuclear weapons. Still, the court judged the atomic bombings illegal based on the principles of existing international law, which dictate that only military targets can be attacked and that unnecessary suffering must be avoided. Needless to say, this ruling was made based on the inhumanity of the atomic bombing.

The plaintiffs lost the case and were not awarded damages by the court.
Their claims were dismissed but the ruling referred to the need for the government to provide compensation for damages caused by the atomic bombings in line with its responsibility for these consequences. It also assessed blame for the government’s lack of appropriate measures toward this end. It is believed that the ruling gave momentum to the enactment of the former A-bomb Survivors Special Measures Law, which laid out various allowances. As the A-bomb survivors did not appeal the ruling, it is finalized, including the decision involving international law.

What happened to the unfulfilled aim of Mr. Okamoto and others?
Once an act is determined as wrong according to the law, certain sanctions will be enforced and measures to prevent its recurrence will be encouraged. This is what legal action means. Our group of lawyers against nuclear arms have actually explored ways to prosecute the illegality of the atomic bombings in the United States. But considering U.S. laws, it is difficult for those living in other nations to file a lawsuit over war damages.

Though we will not contest this in court, we will at least continue to call on the United States to acknowledge that the atomic bombings were wrong. And we urge them to abandon nuclear weapons as a preventive measure. This is also the desire of the A-bomb survivors.

You have been working with A-bomb survivors through lawsuits related to A-bomb survivor certification. What are your impressions?
When I speak to survivors, I realize that they truly believe that the entire human race would be put in jeopardy if these weapons are used again. The international community must become more aware of their experiences.

My father experienced the atomic bombing in Hiroshima, where he worked as a judge. He never shared his experience and did not apply for the Atomic Bomb Survivor’s Certificate. The more tragic the experience, the more difficult it is to talk about. Even more so if the experience could lead to discrimination. Still, there are people who have sought to speak out, thinking of other victims and the future. Their words surely have more power to persuade than anything else.

What is the attitude of today’s Japanese government compared to that of 50 years ago?
At the A-bomb trial, the government testified that the use of nuclear weapons was not illegal under international law. This has not changed, given its written opinion submitted to the ICJ and also in the way it deals with recent statements on the non-use of nuclear weapons released at the United Nations. As long as the Japanese government relies on nuclear deterrence for the nation’s security, it will not pursue a bold shift in policy. Our ability to move the government is being put to the test.

Masayoshi Naito
Mr. Naito was born in Tokyo, and graduated from Tokyo Metropolitan University. Since becoming a lawyer in 1977, he has been involved in lawsuits over HIV-contaminated blood products, state compensation for leprosy patients, and class action lawsuits involving the Great Tokyo Air Raids and A-bomb illnesses certification, among others. Currently Mr. Naito is the lead attorney in Tokyo for the No More Hibakushas lawsuit. He serves as a co-representative for the Japan NGO Network for Nuclear Weapons Abolition. Mr. Naito belongs to the Tokyo Bar Association.