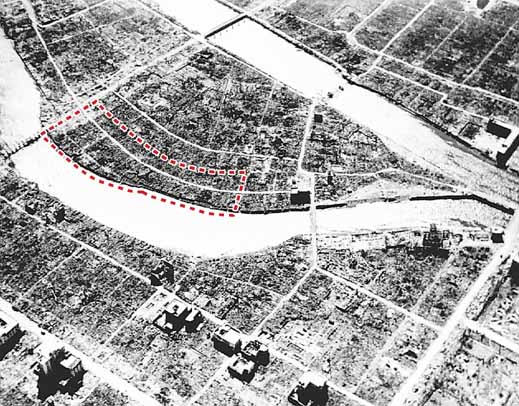 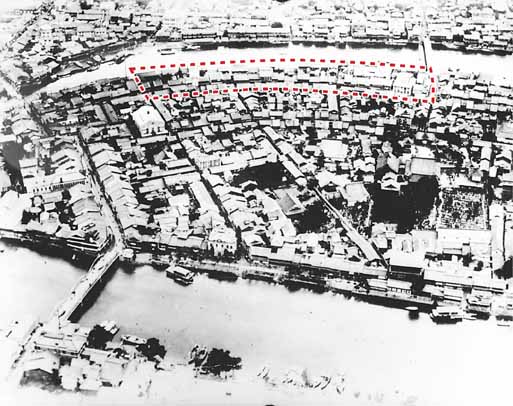 by Masami Nishimoto, Masanori Nojima, and Junpei Fujimura, Staff Writers
(Originally published on October 15, 1998 in the series "Record of Hiroshima: Photographs of the Dead Speak")

Peace Memorial Park, located in downtown Hiroshima, represents the prayers and the pledge of the city which suffered the first atomic bombing in human history. The atomic bomb exploded roughly 600 meters above this area, obliterating the communities of people beneath it.

Before the park was created, one of the districts that stood in this area faced the Motoyasu River and was known as Tenjin-machi Kitagumi. An old map from the beginning of the Showa Era (1926-1989) details this district and shows such businesses as a clinic for internal medicine, a maternity clinic, an eye doctor, a sake wholesaler, a fabric dye shop, and a shop for family crests, among many others. One of the largest ryokans in Hiroshima was located here, too. But all of them vanished in the bomb's flash on August 6, 1945.

Thirty years later, in 1975, a collection of remembrances written by former residents, called “Ano Hi Ni” (“On That Day”), was published. One woman, who as a girl searched for her mother in Tenjin-machi on August 7, wrote: “Around our house, which was completely burned to the ground, I found the remains of about ten bodies, including skulls and limbs and other body parts. When I picked up a bone, it crumbled in my hands like ash.”

This collection of memories was compiled by Hiroshi Shindo, 86. Until August 5, the day before the bombing, he lived in Tenjin-machi Kitagumi. In the 1970s, he took part in a project, implemented by the Research Institute for Nuclear Medicine and Biology of Hiroshima University (today, the Research Institute for Radiation Biology and Medicine), that produced a map of the area near the hypocenter. Based on the information Mr. Shindo collected over the years, we sent letters and made visits to families throughout Japan.

Our aim was to pay tribute to the people of Tenjin-machi Kitagumi who died in the bombing, fading into ash, so their lives as human beings once living in that community could be recalled. At the same time, we hoped to help convey Hiroshima's prayers and pledge for peace into the next century.

Contending with time, since the survivors and the bereaved families are growing old, we were able to determine that 164 residents of this community had died by the end of 1945 (with one dying in 1948). We also obtained photographs of 133 of these people and confirmed their identities.

Still, the victims of Tenjin-machi Kitagumi are only a fraction of the many people who disappeared that day.

Construction of the Hiroshima National Peace Memorial Hall for the Atomic Bomb Victims will commence in 1999 in Peace Memorial Park. In conjunction with this new facility, we intend to continue our efforts to record the impact of the atomic bomb, its annihilation of the neighborhoods underneath, such as Tenjin-machi Kitagumi, and the numerous people, including mobilized students and other workers, whose very remains were reduced to ash.