Zaimoku-cho, Part II: A temple for comfort becomes a park for prayer 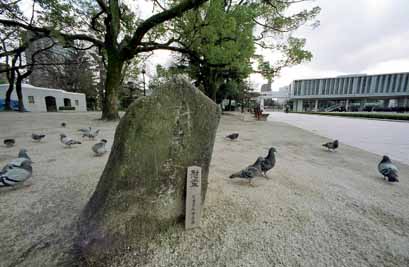 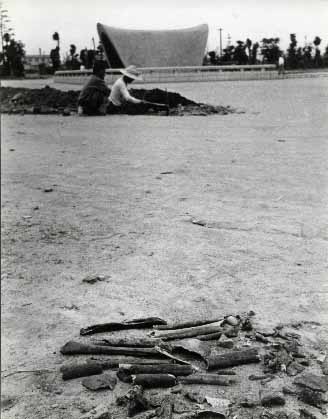 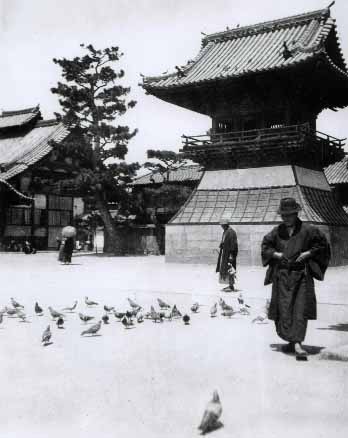 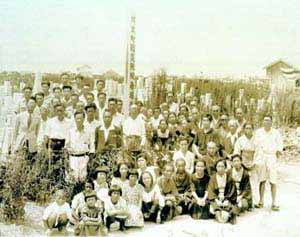 by Masami Nishimoto, Masanori Nojima and Junpei Fujimura, Staff Writers
(Originally published on April 29, 2000 in the series "Record of Hiroshima: Photographs of the Dead Speak")

In August 1947, two years after the atomic bombing of Hiroshima, city residents held memorial services at sites where scars from the blast still remained. About 60 people who had had some connection to the decimated Zaimoku-cho district assembled at the Joenji Temple--which once stood in the area now occupied by Peace Memorial Park--to hold a Buddhist service marking the second year after the bombing. On August 6, 1947, the Peace Festival, the forerunner of today's Peace Memorial Ceremony, took place in the former Nakajima Honmachi district, just north of Zaimoku-cho.

Shisui Uezono, 84, who once served as the head priest of Joenji Temple, held up a photograph of the memorial service for Zaimoku-cho in 1947. Reflecting on the past, he remarked, “I was surprised so many people gathered at the temple that day. I think we felt a kind of joy that we were still alive and had managed to survive in a place where supposedly nothing would again grow.”

After his discharge from military service at war's end, Mr. Uezono returned to Hiroshima and discovered that his parents were dead and the family temple had been destroyed. In March 1946, he constructed a two-room shack in Zaimoku-cho that had no electricity. “Among the former residents, only five households returned,” he recalled. “There were six temples in the district and the head priests of four of these temples perished in the bombing.”

Masaru Sumimoto, 74, had kept the picture of the memorial service Mr. Uezono discussed. A conscripted worker at the time, stationed outside of Hiroshima, Mr. Sumimoto escaped the bombing. But when he returned home, he found that only one member of his family, a younger brother, had survived; five others were gone. “I was just trying to survive it all,” he said.

The Chugoku Shimbun searched for the many people in the photograph of the Zaimoku-cho memorial service and learned that all of them had lost family members in the bombing. Though they were frightened by the possibility of falling ill from the aftereffects of radiation, they had no choice but to rebuild their lives on their own. Survivors who had been mere children at the time of the bombing were forced to endure an especially grim reality, with little help, in the chaos of the post-war period.

“Be strong…You can make it…Just keep going,” one man wrote on a postcard to his younger brother who was living in an orphanage. After losing four family members in Zaimoku-cho, the man left junior high school and found a job as a houseboy. His younger brother eventually settled in Brazil and did not return to Japan until his death. The man, too, left Hiroshima 19 years ago and was no longer in communication with the remaining members of his family. “If only there had been no atomic bomb…,” lamented their aunt. Whenever she passes through Peace Memorial Park, she says she invariably thinks of her older sister and her nephews who lived in a house that once stood in that same spot.

In memory of Zaimoku-cho, a simple stone monument, inscribed “Former Zaimoku-cho District,” was erected by surviving residents east of the Cenotaph. North of this largely overlooked monument, construction of the Hiroshima National Peace Memorial Hall for the Atomic Bomb Victims, slated to open in 2002, continues.