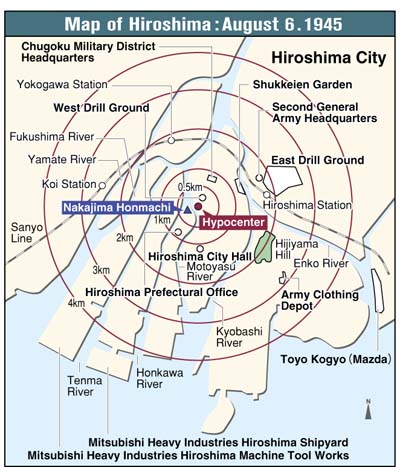 by Masami Nishimoto, Masanori Nojima, and Junpei Fujimura, Staff Writers
(Originally published on July 13, 1999 in the series "Record of Hiroshima: Photographs of the Dead Speak")

Hiroshima, located on the delta of the Otagawa River, has been a city built up by the water since Hiroshima Castle was erected here in the 16th century. According to “Chishinshu”, an old record compiled by feudal Hiroshima during the Edo period, “This area was named Nakajima (Middle Island) because it is located between the Motoyasu River and the Honkawa River.” Nakajima Honmachi has been the heart of Hiroshima for centuries and the area is now occupied by Peace Memorial Park.

In the northwest corner of the park, among a huddle of trees, stands a bronze statue named the “Figure of the Merciful Goddess of Peace, the Memorial for Nakajima Honmachi Residents.” And by this statue is a stone monument that reads, “This is the site of Nakajima Honmachi. During the Meiji, Taisho, and early Showa periods, Nakajima Honmachi was the busiest district in downtown Hiroshima. On August 6, 1945, all the people in this neighborhood died instantly.” This memorial was erected in 1956 by the Nakajima Honmachi Association, an organization of former residents.

The first market in Hiroshima, called “Shusanba,” was established in Nakajima Honmachi in 1882, seven years before the city officially became a municipality. Ten years later, another market, called “Kanshoba,” was built on the north side of the former Sanyodo Highway that once ran through this area. The city's first movie theater opened in this district as well, and further contributed to Nakajima Honmachi's reputation as the commercial and cultural center of Hiroshima.

Nakajima Hondori street, popular for strolling, was adorned with bell-shaped lights, resembling “lily of the valley” flowers, which illuminated the way with their soft glow starting in the early 20th century. From the gate of Jizenji Temple to the Aioi Bridge, the street was alive with cafes, fancy restaurants, inexpensive taverns, and other establishments. Sadayo Tatsuno, 80, whose parents owned a toy shop at Kanshoba market, recalled, “I often saw geisha passing by on rickshaws. I was only a child, but I thought this was a very modern and fashionable area.”

Nakajima Honmachi also stood out due to the T-shaped Aioi Bridge, rebuilt in 1934 to install streetcar tracks. This bridge ultimately became the target of the atomic bombing. The pilot of The Enola Gay, from which the atomic bomb was dropped, said that the Aioi Bridge was the “perfect target.” Military facilities, including the Chugoku Military District Headquarters, had been built up on the north side of the bridge.

The atomic bomb exploded 300 meters southeast of the bridge and 600 meters above the ground. The fireball engulfed the surface of the earth at a temperature that exceeded 3,000 degrees, accompanied by the blast force and radiation effects. A report by the United States Strategic Bombing Survey, issued in June 1946, stated, “In the immediate area of ground zero, the heat charred corpses beyond recognition.” The entire area of Nakajima Honmachi was within 400 meters of the hypocenter.

To provide prayers for the repose of the dead, the survivors of Nakajima Honmachi erected the statue of the Merciful Goddess of Peace. Then, in 1973, the bereaved families and former residents added a marker on which to etch the victims’ names--425 names are now inscribed there. Using this list of names, the Chugoku Shimbun contacted relatives and attempted to track the experience of these victims on the day the bomb fell.

But fifty-four years have passed since the bombing. Subsequent generations of the bereaved families have only faint memories of their forebears. The bomb, which destroyed their ancestors without a trace remaining, simultaneously erased family memories. Thus, the facts of the atomic bombing have proven difficult to clarify. Still, many families, now living in different parts of Japan, did their best to assemble records and photographs of their family members to shed light on this concealed history.

Regarding 255 people who once lived or worked on the north side of Nakajima Hondori, the main road which ran towards Aioi Bridge, the Chugoku Shimbun was able to confirm the circumstances of their deaths occurring by the end of 1945 as well as four people who died subsequently of the bomb's aftereffects. In addition, photographs of 188 people were collected and their names confirmed. A map of the northern part of Nakajima Honmachi was also drawn, based on a photograph taken at the same altitude at which the atomic bomb exploded.

Surrounding the “perfect target” of the atomic bombing, until the very moment of the blast, was a small world alive with people, families, and communities.
ツイート
Return