Nakajima Honmachi, Part II: Appeal for peace from the dead 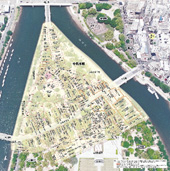 by Masami Nishimoto, Masanori Nojima, and Junpei Fujimura, Staff Writers
(Originally published on August 3, 1999 in the series “Record of Hiroshima: Photographs of the Dead Speak”)

August 6, 1945 was a hot, humid day in Hiroshima with a clear sky. At 8:15a.m., the atomic bomb was dropped over Aioi Bridge, a T-shaped bridge called a “perfect target” by the pilot of the B-29 bomber The Enola Gay. Forty-three seconds later, the bomb exploded in the sky 600 meters above the ground. Under the first atomic cloud in history, Nakajima Honmachi, a district between the Motoyasu River and the Honkawa River, was annihilated along with the rest of the city.

Fumie Miyawaki, 71, sent the Chugoku Shimbun a letter from Tokyo after she read the article “Nakajima Honmachi, Part I,” originally published on July 13, 1999. She used to live at Jisenji-no-hana, near the Aioi Bridge, in Nakajima Honmachi. On the day of the bombing, she left home and went to the Hiroshima Shipyard of Mitsubishi Heavy Industries as a member of the Women's Volunteer Corps. She was at that site when the bomb exploded.

“I survived and I searched for my mother every day. I visited shelters, first-aid stations, everywhere. Where did they all go? Where are they hiding? My friends, their families, our neighbors...I had no idea what had happened to them. Nakajima Honmachi was a dead world.”

In 1946, a wooden monument called the War Victim Memorial Mound, along with a hall to pray for the repose of the victims, was constructed by the city. On the first anniversary of the bombing, the citizens of Hiroshima held a memorial ceremony there. Today, the Atomic Bomb Memorial Mound lies at the same site in Peace Memorial Park. This mound contains the ashes of about 70,000 unidentified victims. In 1947, the first “Peace Festival” was held at a wooden peace tower built at Jisenji-no-hana. This was the start of the Peace Memorial Ceremony, commemorating the atomic bomb victims, which has continued to today.

Mayor Shinso Hamai (1905-1968) read the first “Peace Declaration,” broadcast nationwide on radio: “The people of the world have become more aware that a global war in which atomic energy would be used would lead to the end of our civilization and the extinction of mankind. Let us join together in renouncing war eternally and build a plan for world peace on this earth.”

In this article, the Chugoku Shimbun focused on the people who were living or working on the south side of Nakajima Hondori street to the area where the Memorial Cenotaph now stands, erected in 1952. In all, the fates of 188 people were found: 180 had died by the end of 1945 and eight others had died by the end of 1957. Among these people, photographs were obtained of 152, together with the recently-discovered photographs of three people who lived or worked on the north side of the street.

In the whole district of Nakajima Honmachi, 458 people died, including 22 who died between 1946 and 1959. Of this total, photographs of 343 people were collected and their names confirmed. The reality is that four out of five people who once lived in Nakajima Honmachi died “that day.”

Today's appeal for peace from Hiroshima to the earth emanates from a world of the dead, Nakajima Honmachi.
ツイート
Return